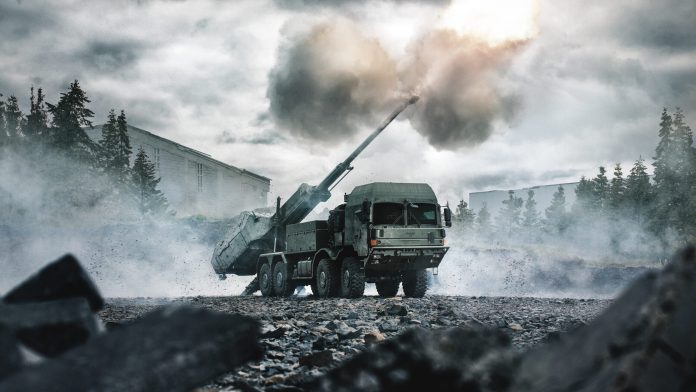 EUROSATORY 2022: Sweden has signed a contract with BAE Systems Bofors for another 24 Archer truck-mounted howitzer systems to equip the additional artillery battalion that is to be set up in line with the Swedish Total Defense Strategy 2021-25.

Mikael Frisell, head of Swedish Defense Materiel Administration FMV, and Lena Gillström, Managing Director, BAE Systems Bofors, signed the Letter of Intent here at the Eurosatory show in Paris. “We look forward to being part of the development of increased artillery capability for the nation,” Gillström said at the signing ceremony on June 15.

The procurement is “part of the commitment for enhanced artillery capability,” Mikael Take, Bofors program manager, told Breaking Defense, adding that in Sweden “there is significant concern with what is going on in Ukraine.”

Sweden has already fielded 48 of the systems since the first was delivered in September 2015. Each is mounted on a Volvo A30 6×6 articulated hauler “chosen at the time for its off-road capability,” Take explained. The next 24, however, will be mounted on a Rheinmetall MAN Military (RMMV) HX2 8×8 chassis “which is a faster vehicle for on-road mobility,” Take said. The vehicle has a top speed of 56 mph and a cruising range of 500 miles.

The truck’s air-conditioned cabin is lightly armored, providing ballistic protection from fragments, bullets and anti-tank mines but is built so that extra armored kits can be bolted on for additional protection. The cabin is over pressurised to provide CBRN protection. Other fleets in the Swedish armed forces also operate the RMMV, so the choice simplifies repairs and upkeep. But Bofors stresses that other nations could choose another carrier for the howitzer.

The Archer fully automatic 155mm 52-calibre gun can fire eight rounds per minute and is usually operated by a three-person crew (including the driver) who never have to leave the protection of the cabin. But if necessary, it can be operated by a single driver. One of the drivers at the show  told Breaking Defense that it can start firing “20 seconds from when I hit the brakes and in less than two minutes can have fired all 21 rounds and be gone long before any enemy riposte can reach us.”

The system can be accompanied by any type of container-carrying support vehicle that would carry a modified standard ISO container housing up to 100 rounds. The Archer can be reloaded in five minutes.

The howitzer has a range of more than 31 miles with conventional artillery rounds and 37 miles with precision-guided munitions including the Excalibur. It has traverse capability from +85° to -85°, the company says.

RELATED: Autonomy on a Stryker? ‘It’ll be challenging,’ general says

The automatic loading mechanism was inspired from Bofors’ naval gun division which had developed a modified F77 artillery system for Sweden’s maritime defense that featured such a system, the company said. Take explains on the Bofors website that “the big step was introducing a magazine that could handle the projectiles and charges automatically.” He adds that “we could take all the calculations normally carried out remotely and manually at a fire direction center and put them into the gun. Suddenly, the gun could operate more or less by itself.”

Earlier this month the Archer was shortlisted by the Swiss government to go into the final round of competition for its future artillery system. The Swiss Federal Office for Defense Procurement, Armasuisse, received multiple proposals submitted by several companies for the competition. The Armasuisse director of communications told Breaking Defense in a telephone interview that two other companies that make wheeled-truck artillery systems had been down-selected but their names would only be made public early next week.

The Archer is a strong contender for the UK’s Mobile Fires Platform program which is currently in the pre-competition phases with a contract scheduled to be announced in 2026 for initial operation in 2029. It also took part in the US Army’s Mobile Howitzer trials and shoot-off held last fall.