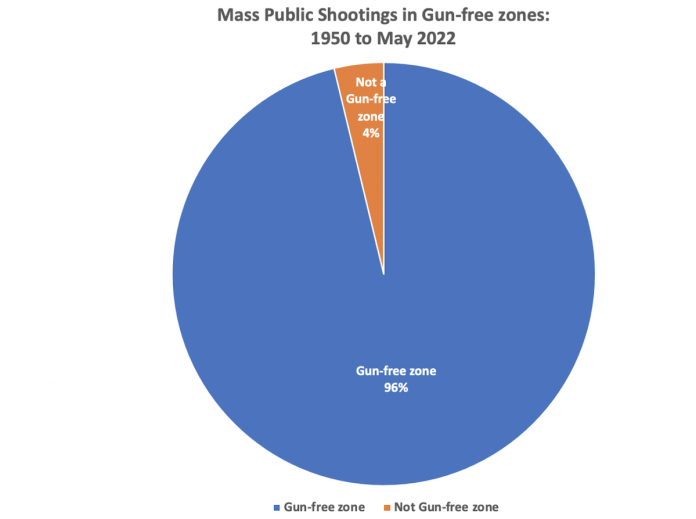 Anti-gunners frequently tout so-called “assault weapons” as the “preferred weapon” of mass killers. But the truth is that handguns are used in more than half of all mass public shootings.

Therefore, the notion that a ban on modern sporting rifles will significantly impact these events doesn’t hold water.

As Dr. John Lott, the founder of CPRC, recently told Fox Digital, “There’s been a lot of studies done on things like assault weapons bans, background checks … Even for the assault weapons ban, even the Clinton administration – which signed it into law – paid for research on it. And even their studies couldn’t find any benefits in terms of reducing a type of violent crime or in terms of stopping things like mass public shootings.”

They’re not assault weapons— they’re weapons of mass destruction that endangered of millions of American children on a daily basis.

Presidential candidates should see it is none other than mandatory for them to implement a buyback program of these weapons of mass destruction.

Does this mean we should ban handguns?

Hell no, as they are by far the go-to defensive weapon for law-abiding citizens who bear arms in public. As the old saying goes, disarming good guys does not make bad guys less dangerous.

The point is any proposed ban on “assault weapons” is window dressing that distracts from the underlying problem: potentially violent individuals who either need mental health treatment or permanent incarceration.

It’s hard to view this pie chart and not see an overwhelming trend. That is, mass killers prefer soft targets.

“To me, it’s obvious. Look out there and you see about 96% of the mass public shootings occur in places where guns are banned. These people want to kill as many people as possible. And they know if they go to a place where victims aren’t able to go and defend themselves, they’re going to be more successful,” Lott told Fox Digital.

Lott noted that turning soft targets into hard targets is “one thing that would work” to deter mass killers.

“These gun-free zones actually serve as magnets for these killers to attack,” he explained. “Because they know they’re going to be more successful in terms of killing.”

Along these lines, the National Rifle Association made a cogent observation:

Apart from the fact that the U.S. Court of Appeals for the Ninth Circuit just struck down California’s age-based gun ban as unconstitutional, measures to deny 2A rights to adults under the age of 21 would not end mass public shootings as only 17 percent of perpetrators are under 21.

This stat is missing from the current debate over age restrictions for gun purchases.

What’s more is that just because a determined killer is banned from purchasing a firearm by law, it doesn’t mean that he cannot buy a gun on the black market, obtain a gun via a straw purchaser or steal a gun from a friend, or family member, or neighbor.

The Sandy Hook shooter, for example, murdered his mother and used her guns to perpetrate the attack on the elementary school in Newtown, CT.

Yet, the truth does not stop anti-gunners from arguing that age-based gun bans are “common sense.” They usually cite laws regulating the consumption of alcohol to make their point:

Being able to buy guns three years before a beer is utterly baffling. No civilian needs a gun.

The problem with that logic is, of course, the 2A is a right — not a privilege. Adults — law-abiding citizens 18 and up — have the right to keep and bear arms under the constitution.

As the 9th Circuit said in its majority opinion last month, “America would not exist without the heroism of the young adults who fought and died in our revolutionary army.”

Please share these charts with those who are new to gun debate as they will dispel much of the misinformation and disinformation that’s being piped out from mainstream media on a 24/7 basis.

Also, please consider making a donation to the CPRC, or at the very least, sign up for the CPRC newsletter. Dr. Lott is an invaluable asset to the gun community, and we need to ensure he has the resources at his disposal to continue his work.

Say Hello to the Walther Magnum Pistol, or WMP