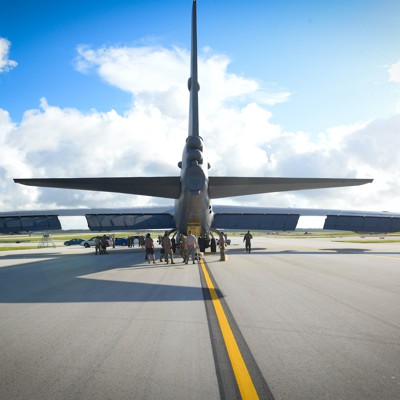 Useful Fiction is a new approach to sharing research and analysis through using the oldest communications technology of all: story. Sometimes called FICINT or Fictional Intelligence, it fuses real data and insight with narrative scenarios. The goal is not to replace the white paper or journal article, but to provide a new means to share insights, in a form that audiences are more likely to read, but also more likely to act upon. If science fiction and technothrillers are like a milkshake, and strategy papers and trend reports are like vitamins or kale, think of useful fiction as the equivalent to a breakfast smoothie for policymakers that blends education and entertainment with a purpose. This essay was produced through an initiative undertaken with the U.S. Air Force’s “Blue Horizons” futures team.—P.W. Singer and August Cole

“Eyes of the Eagle was a common Air Force Office of Spec…” Jakko’s deep voice had a fighter pilot’s crispness.

“I knew it!” Doug interrupted. “I keep winning these trivia contests and you are gonna owe me more than a case of Jeremiah Weed. Now stop distracting me, Jakko; we have work to do.” He chuckled, trying to break the tension. “Look and report, Airman. Don’cha know the job of an ABM is never done!”

“Live video inbound to your scope.”

The red light above Doug’s station cast a weird hue on his screen. The remains of a B-52 burned furiously at the end of an Anderson Air Force Base runway. Then came a tremendous flash, and translucent rings that seemed to bend the whole world.

“…caught the effin’ blast wave,” Doug muttered. “Buff is blocking the runway, fighters still on the ground. That damn DF-17 did its work. Guam is a sittin’ duck. Effin’ China.”

Louder, now: “What are you doin’ over there, Jakko? Return to wingman position. Nothing more we can do for them except keep our eyes west and callin’ targets.”

Doug watched the return shift to an intercept course. He stared at his scope, pondering, shifting uncomfortably in his sliding aluminum chair. His back ached, the air felt thick, and the smell of JP-8 coated his nostrils. Dual turbofan engines whined through his headset like a mosquito just out of reach.

He pulled at the undershirt sticking to his sweating and mildly overweight frame and stole a glance at the photo taped beside his monitor. A small girl in pigtails offered a gap-toothed smile, and he smiled back, remembering how he had mistakenly slid a $10 bill under Elizabeth’s pillow last time he played tooth fairy. “I love you, little girl,” he mouthed silently.

Pulling his thoughts back to his scope, he tried to recall spotting the hypersonic return.

“I swear I saw a blip, but the damn thing hit before I could even key my mic.”

“Raptor 6-ship and the gas truck pulling them…600 nautical miles out, but they’re not going to be able to resupply at Guam. Where the hell are they gonna go, Jakko?”

“Maybe we can get another tanker inbound to get those boys closer to the fight. I’d like to ram one of those AIM-120s right up President Zhang’s ass!” Doug chortled. “Get it? Because an AIM-120 is an AMRAAM? Ah, you never laugh at my jokes.”

Doug squeezed his eyes shut, blinking to summon some moisture and give them a second’s rest. Looking down the length of the aircraft, he could see the nine other crew consoles, each with an Air Battle Manager like himself tracking airborne and maritime targets. Well, all but one.

“Skip’s in the lav again,” he mused. “Someone should have warned him about that Mexican place.”

The other ABMs were glued to their scopes, wearing expressions that ranged from grave to enraged. Given the opportunity, Doug was sure that each one of them would have taken out China’s new president themselves for the surprise attack that had killed so many of their brothers and sisters at arms.

Zhang had been in power just a few months, having taken over after Xi Jinping died of a previously undisclosed illness. Doug pondered if the sudden power change in China was more than just coincidence.

“At least Xi understood that there was value in strategic competition. This mother-effer is just as crazy as that North Korean pecker-head that got himself whacked. Jakko, what was his name? Rocket Man?”

“Trump!” Doug interrupted, “I remember my history. Come on! One more bottle of Jerimiah Weed, my friend! Now, are you getting paid to answer trivia or fly? How long till you get back?”

Leaning to one side of his monitor, Doug passed the coordinates of the Raptor 6-ship.

“Those guys are gonna need another gas truck. They’re not landing at Andersen tonight.”

Doug stole another glance at Elizabeth’s toothless grin, then slid his eyes back to the scope. There was a new return he hadn’t seen a moment before.

Doug watched Jakko’s return change trajectory. As he waited for a reply, the radar return disappeared, then reappeared, smaller than before.

“This mother-effer is moving and looks like it’s trying to be stealthy!”

The unknown return grew as Jakko added his radar data to the common picture. Then the deep voice sounded in Doug’s headset. “Aircraft is a Chinese J-20. It is on an intercept course with Whisky Tango 917. Request authority to engage.”

“Wedgetail 917 is us!” Doug gulped. “Jakko, authorized to engage! Get that effin’ Dragon!”

“Roger, Altius 1200 in the air,” Doug recited. In a moment, his scope lit up with new intelligence from the drone’s sensors. “Signals confirm J…”

Doug stared at the scope, watching the pips of two AMRAAM missiles speeding toward the J-20. Then he saw another return: the J-20 had launched a missile of its own.

Time slowed down. The J-20 was maneuvering in an effort to shake the AMRAAMs. Jakko was still closing the gap to keep the Chinese pilot from breaking contact.

His E-7 carried no defenses against air-to-air missiles. Doug looked to his daughter’s face, shining red under the battle lights.

The drones accelerated toward the inbound missile, coordinating their approach and showering it with focused electromagnetic interference. Supersonic, and yet they still felt slow on the scope. Doug watched breathlessly as the blips of the Chinese missile and the U.S. drones merged onscreen.

Doug waited. Then his heart dropped as the missile continued past the drone swarm. Tears started to fill his eyes as he reached toward Elizabeth’s picture.

Doug tore the photo from the console and held it to his chest. The cargo bay boomed with a sound that seemed both close and far away. His seat bumped violently.

Slowly, like a ringing in your ears that begins slowly but then grows to the point where you feel you can hear nothing else, he heard something: the cheering of the rest of the folks on his aircraft.

Doug put down his headset and his eyes unfocused behind tears.

“He saved me. He saved us! He sacrificed himself…”

Doug thought of all their banter…well, mostly his banter. Jakko never talked too much. He remembered their playful competitions, and all of that Jerimiah Weed that Jakko “owed” him. He vowed that when they landed—wherever that might be—he would raise a glass to his friend. Just how much of a hero had Jakko been? It was a complicated question.

The airstrip was remote, but it had a functioning and reasonably well-stocked bar. Doug wondered how many lives had been saved that day—not just the 14 aboard WT917, but all of the other flights that the E-7 had helped during the fight’s remaining hours.

Jakko had thrown himself in front of a missile like a soldier jumping on a grenade to save his platoon. Hadn’t the Medal of Honor been earned for accomplishing less? Jakko should be eligible, he thought—but the Pentagon had never offered that high honor to a machine. Doug resolved to honor his loyal wingman in his own way. He raised his glass to the Joint Autonomous Kinetic Kill Option, emptied it, and had the bartender pour another.

Maj. Kyle McCracken is a career Office of Special Investigations Special Agent with numerous assignments conducting and supervising felony-level criminal, fraud, and counterintelligence investigations and operations in the physical and cyber domains. This story is his and does not necessarily reflect the positions of the U.S. Air Force or U.S. government.

The Magazine Vest From ‘Heat’ – McCauley Would Not Be Pleased