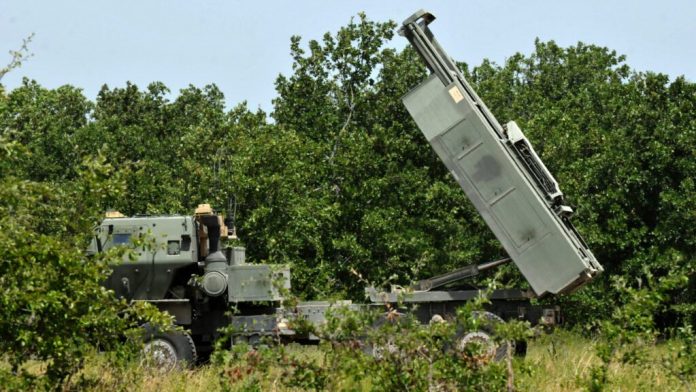 EUROSATORY 2022: The Army is making incremental progress on its developmental Autonomous Multi-Domain Launcher, but is still working through the exact requirements for the AI-enabled long-range fires capability.

The Army doesn’t currently have a program of record for the launcher, a High Mobility Artillery Rocket System (HIMARS) modified with software to be controlled remotely and driven autonomously. US Indo-Pacific Command has a particularly keen interest in the system, due to its mobility and range that could provide effective shots against enemy anti-access/area denial capabilities.

“We’re in the maturation process of Autonomous Multi-domain Launcher. That includes, well, how might we use it?,’” said Jeffrey Langhout, director of the the Aviation and Missile Center at the Army’s Combat Capabilities Development Command (CCDC). “This is the part of the process where we are trying to figure out what the requirement really needs to be.”

Langhout said that the team is currently in the process of integrating the autonomous, driverless technology that CCDC’s Ground Vehicle Systems Center is building, as well as artificial intelligence algorithms created by the Army’s Artificial Intelligence Integration Center that will serve as the “brains” of the HIMARS launcher, he said. Additionally, the service is developing the code to control the launcher from different locations. It also wants one soldier to be able to control multiple launchers.

Langhout is “very comfortable” with the driverless technology and the launcher code, but said the challenge is connecting it all into one larger integrated system. “Merging all that stuff together — it’s the first time we’ve done it and we really haven’t done it to this level,” he said.

According to Langhout, AML will “demonstrate the next maturation level”  at Project Convergence later this year.

Regardless of if or when the launcher becomes a program of record, Indo-Pacific Command leaders are showing interest, given the distributed nature of warfare in the Pacific. He said that the Army is still “not as mature” in terms of figuring out how it will be used and is using modeling and simulation to figure out operating concepts.

But the service has floated around some ideas. Last year, the service released a video showing C-130s landing on an island, unloading a manned HIMARS and unmanned AML, which drove as part of a manned-unmanned team. They both fired at enemy threats and returned to the C-130s, which quickly departed. The video showed the launcher firing Precision Strike Missiles, one of the Army’s new long-range fires capabilities.

“Those are concepts we see,” Langhout said. “Again, a concept that is by no means mature, or even for even decided upon, all part of what might work best in the INDOPACOM environment.”

Langhout said that AvMC received a request from the command to continue to develop the system, and eventually deliver it to a large test event in the Pacific “in a couple of years.”

The service successfully demonstrated the proof of concept for the launcher last June during a multi-round live fire demonstration for the Long-Range Fires Cross-Functional Team at Fort Still, Okla. The simulation featured simulations of the PrSM missiles’ longer and short-range capabilities across three islands scenarios, according to Defense News. Langhout said that the work last summer was “very, very basic” and that the platform is looking to increase its level of complexity moving forward.

“Last year, what we did was very, very elementary school stuff,” Langhout said. “Well, now we’re getting into middle school and high school level of complexity. And of course, we need to be at a PhD level by the time we actually would field it to a soldier.”

Erhardt: Americans Building Their Own Firearms is a Fundamental Act of Self-Sufficiency