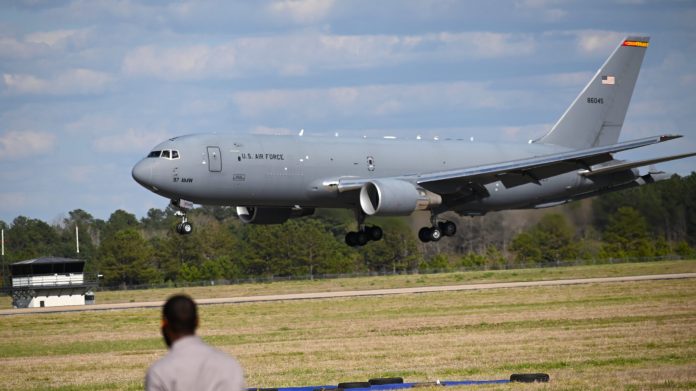 A KC-46 Pegasus lands at Columbus Air Force Base, Mississippi, in preparation for the Wings Over Columbus 2022 Airshow, March 24, 2022. (US Air Force/Senior Airman Jake Jacobsen)

SEATTLE: Boeing’s KC-46 tanker has seen a new surge of interest amid the COVID-19 pandemic and Russia’s invasion of Ukraine, and the company expects to announce a new international customer for the aircraft as early as the end of 2022, a Boeing official said.

All told, the company expects to sell up to 42 KC-46 tankers in addition to its current backlog, said Mike Hafer, Boeing’s senior manager for KC-46 business development.

“There’s several countries that have always been lukewarm, that have now said, ‘Hey, what does your line look like?’” he told reporters during a visit to Boeing’s military delivery center in Tukwila, Wash. Breaking Defense accepted airfare and hotel accommodations from Boeing as a part of the trip.

“A lot of — especially NATO — countries are doubling some of their defense expenditures, which has increased the interest in all types of capabilities, all types of Boeing products,” he said. “We’ve seen that replicate itself here [in the KC-46 program] as well. … Russian aggression has stimulated business. But it’s not what I wanted to stimulate business.”

Hafer added that the most imminent sale has been in the pipeline since before Russia’s invasion of Ukraine.

The COVID-19 pandemic has also increased interest in the KC-46, particularly among international militaries who are interested in using the aircraft primarily as a cargo freighter to transport supplies or respond to humanitarian contingencies.

Since early 2020, a total of six international militaries have approached Boeing about the KC-46 tanker, including some who have enquired about a freighter version without refueling gear, Hafer said. Boeing has no plans to create such a variant, said Hafer, who added that he steers potential customers to buy the KC-46 as currently configured.

The KC-46 program has been a costly and technically challenging endeavor for Boeing, and one that has left it lagging behind its closest competitor — the Airbus A330 Multi Role Tanker Transport — in the realm of international sales.

While the MRTT has been sold to Australia, France, the United Kingdom, the United Arab Emirates, Saudi Arabia, Singapore, South Korea and NATO, among other pending deals, the KC-46 has only logged two international customers: Japan, which has signed on to buy a total of four tankers, and Israel, which has received US government approval to buy up to eight KC-46s.

Meanwhile, Boeing has racked up more than $5 billion in cost overruns on the program, which it is contractually obligated to pay for out of pocket. And although the Air Force recently approved the KC-46 to refuel 97 percent of US military aircraft, it will not be fully operational until 2024 at earliest.

However, Boeing is still likely to come out ahead on total sales due to the large volume of the US Air Force program of record, which includes 179 KC-46s. The Air Force is currently considering whether to buy additional KC-46s or open a competition for a so-called KC-Y or “bridge tanker” that would continue to replace the service’s legacy tanker force.

In May, Air Force Secretary Frank Kendall said the service could instead continue to buy the KC-46, and that a KC-Y competition is “not as certain” as officials previously believed. That could add as many 160 KC-46s to Boeing’s backlog.

However, Rep. Jerry Carl, R-Ala., plans to submit an amendment to the fiscal 2023 defense policy bill that would force the Air Force to hold a KC-Y competition, Politico reported earlier this week. That could open the door for US sales of the MRTT, which would be manufactured and assembled by Lockheed Martin in Alabama and Georgia.

How to Catch Catfish in Winter