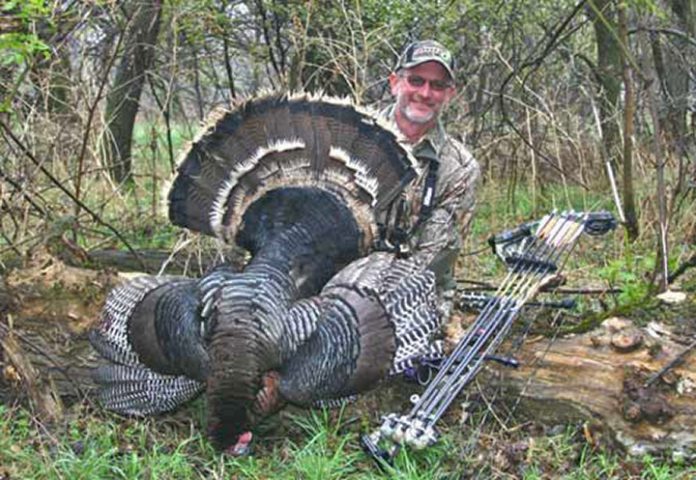 In April, one day before the wild turkey opener, on the Rosebud Sioux reservation in South Dakota. We were preparing to hunt the reservation’s incredible population of Merriam’s wild turkeys. My friend Ken Byers, a media sales rep from Michigan, has been hunting the ‘bud for over a decade and he annually hosts a wild turkey hunt for several archery and gun industry members.

On this year’s hunt were New Archery Products’ Brady Arview, Easton’s Gary Cornum, Hoyt’s Jeremy Eldredge, and Mark Seidlinger of Media Direct. Derrick Nawrocki and Lee Heatherington were here from Grand View Media Group, publishers of magazines like Bowhunting World, Archery Business, Whitetail Journal, and Predator Xtreme, all of which I write for and/or edit.  Ralph and Vicki Cianciarulo were also here filming an episode of their Archer’s Choice cable TV hunting show. It was a great group and lots of fun.

Once they leave the roost and hit the ground, these Wild turkeys at the ‘bud’ simply do not call much, and so over the years Ken has developed a radical new way of hunting them. In addition to the standard set up a blind and use decoys gig, he began “fanning” them.

“Because these gobblers do not call much nor do they respond to calling all that well, we hunt them ‘Run & Gun’ style,” Byers said. “We glass them up, then do a spot & stalk sneak to get as close as we can and set up. Then one guy raises a real turkey tail fan, hides his face behind it, and slowly moves it back and forth while peeking through the feathers.

The shooter is behind and slightly off to one side, hidden by brush and the fan. The fan gets the gobbler’s attention, and when it flips their switch they come running right at you! It isn’t unusual to get a shot under 20 yards – and sometimes even closer.

“Oddly enough, I initially got the idea of The Fan from Ralph Cianciarulo about four years ago,” Byers said. “We kicked it around and started trying it a couple years ago. It’s become a staple for us now.”

OK. My dad was from Missouri and, like the state’s “Show Me” motto, I have to see it first to believe it. So during the week I witnessed several gobblers attack The Fan. Sometimes they did so with reckless abandon, and sometimes they just sort of cautiously worked their way closer, but closer they came.

A quick disclaimer. Like all hunting tactics, The Fan doesn’t work every time. You have to get close first. It seems like it works best when you don’t flash it until you’re about 75 yards from the gobblers or closer. It also worked best on small groups of wild turkeys, those with a gobbler or three and a hen or two, and not so well on groups of, say a half dozen gobblers and three or four hens. And sometimes gobblers saw The Fan and raced off the other way. But more often than not, The Fan got the gobblers into range.

Making the shot is nothing like it is when they come to a decoy and you are in a blind. You have to be able to shoot from your knees, and draw and you have to shoot relatively quickly. There is rarely enough time to use a rangefinder, unless you are able to take a few quick readings off brush or rocks or trees in the anticipated line of approach. And, of course, there are those times when the gobbler comes in at just the wrong angle, putting some sort of obstacle between you and him.

It worked for me in a slightly different manner. One afternoon Ken, Gary, Mark and I were driving along a river bordered by some agriculture when we spotted six strutters along the edge of the field. Mark volunteered to be my ‘fanner,’ so I grabbed my bow and we began slinking along the river’s edge toward them. The river and field were separated by a 10-yard wide strip of brush, and that allowed us to quickly cover the first 500 yards. We slowed the final hundred, easing our way toward where we could occasionally see a piece of a gobbler head through the brush. Though we kept looking for a place we could slip into the thick stuff close to the turkeys, it was just too thick, and next thing you know we were parallel with them. Now what?

We could see, sort of, one big red head through the jumble of brush and tree branches. When Mark showed him The Fan, the big gobbler picked it up instantly. He looked and looked, but I surmise that because he couldn’t see anything but bits & pieces, he wasn’t sure what to do. There was no way to shoot him though the brush from where we stood – he was only 10 yards away – but just a step to my left, I thought perhaps I could find a small hole. Of course, making a move away from the protection of The Fan is an all or nothing gamble, so I hesitated for a moment.

When the gobbler looked away for an instant I took two quick steps left, drawing my Hoyt bow as I planted the last step. In one motion I centered the top pin of the Montana Black Gold sight on the gobbler and anchored. In that same motion the gobbler, now aware that something was amiss, took a step to his left as he prepared to accelerate. I found a hole the size of a paperback novel in the brush, lined up pin, hole, and feathers, and released.

It was wild! There were actually eight turkeys total, six gobblers and two hens, and at the shot all eight scattered like leaves in the wind. I was shooting a Gold Tip Pro Hunter shaft tipped with a 100-grain Swhacker expandable. It entered the turkey just above his left hip and exited through the right wing butt, leaving a devastating hole. He ran into the field with both Mark and I giving chase, and less than 75 yards later it was over.

Can you imagine? Mark and I had just pulled off one of the most difficult of all North American bowhunting tricks – stalking a mature gobbler on the ground, getting a 10-yard shot! And there is no doubt that The Fan paid off big for us.

Could it have been better? Oh, yes. While Mark and I were doing our thing, Ken and Gary had found another gobbler and single hen just across the field from us. They set up quickly, Ken yelped softly and fanned ‘em, and here they came. The hen strolled through a small gap in a ditch bank, so the pair correctly deduced the gobbler would follow. At under 20 yards Gary propelled an Easton Axis Full Metal Jacket carbon shaft tipped with a New Archery Products Gobbler Getter head right through him.

A Conversation with the BLM’s Tracy Stone-Manning

3 Ways to Store a LOT of Water in Smaller Spaces