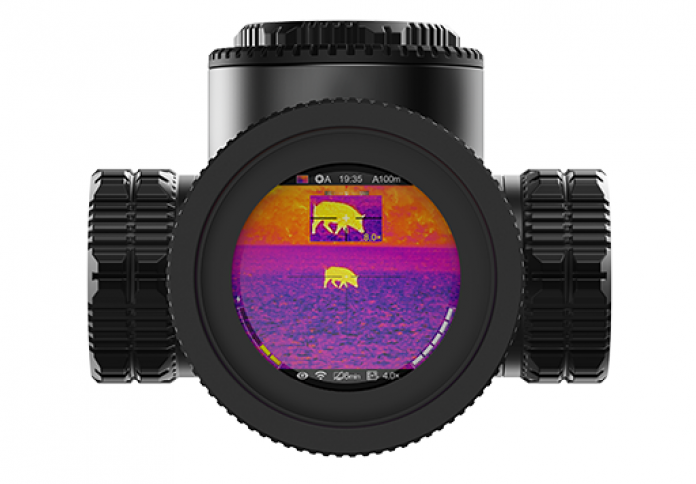 The Texas-based iRay USA has released a new thermal rifle scope line, called the InfiRay Outdoor BOLT-C Series. These new rifle scopes have a traditional look and use a standard 30mm ring mounting interface. The thermal sensor is a powerful 12 μm 640×512 Micro II where the results are displayed on a 2560×2560 Micro-OLED HD display. The Bolt-C Series rifle scopes use a shutterless calibration and will be offered in two versions, the TH50C with a 50mm objective lens and the TH35C which uses a 35mm objective lens. Fort Worth, TX – iRayUSA, a Texas-based designer, manufacturer, and distributor of premium thermal night vision devices, announced today the release of a new thermal rifle scope line, the InfiRay Outdoor BOLT-C Series. The BOLT-C Series expands on the successes of the originally released BOLT with the addition of their industry leading 12 μm 640×512 Micro II sensor, 2560×2560 Micro-OLED HD display and Shutterless Calibration feature while maintaining the traditional look and flexibility of a 30mm ring mounting interface. Boasting a proven combination of a manual focus lens, dual battery design and tactile control turret, now working in tandem with a pixel-dense display and 640×512 sensor, the BOLT-C will provide an improved viewing experience and bring an unmatched level of precision to your next hunt.

“The original BOLT has been extremely popular among hunters who prefer to use traditional bolt-action rifles” stated Angelo Brewer, Director of Operations, iRayUSA. “Building on the original BOLT, the BOLT-C Series offers a higher resolution sensor, a 5X increase in display resolution and an improved runtime of more than 10 hours of continued use” continued Brewer.

The BOLT-C Series is offered in two versions, the TH50C with a 50mm objective lens and the TH35C with a 35mm objective lens. Both models allow the user to choose between 7 reticle types and 4 reticle colors, and feature 32GB of internal storage and seamless WiFi streaming. The BOLT-C also includes 30mm picatinny mounting rings allowing it to be out-of-the-box ready.

5-Year Warranty with 1-Week Turnaround Process
At iRayUSA we are first and foremost hunters and users of our products, and we understand that failure is not an option. One of our primary objectives at iRayUSA is to greatly improve the customer service level for the end user. We accomplish this through offering our industry-first 1-week repair guarantee, and by only working with highly qualified Authorized Dealers. During the published warranty period, iRayUSA will repair or replace, at its discretion, any optic that becomes defective from normal use. If we cannot repair an optic in less than one week, we will offer a replacement in like or better condition.

Learn more about our products at: www.irayusa.com