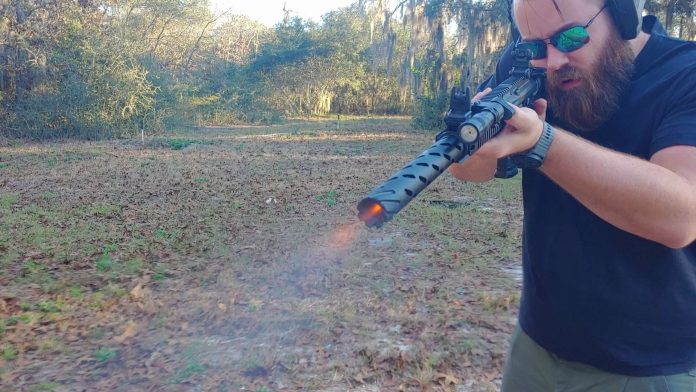 The AR-15 comes in nearly any caliber you could want. Obviously, we have 5.56, 300 Blackout, 9mm, but we also get oddballs like the 5.7×28, the 4.6x30mm, and big bore calibers like the .458 SOCOM and 50 Beowulf. What if you wanted a shotgun AR? Not a shotgun that looks like an AR, but an AR-15 that uses a MIL-SPEC multi-cal lower complete with a standard upper? Well, that’s certainly an option, and the Charles Daly AR .410 upper receiver delivers unto you your shotgun AR.

The upper is a gas-operated .410 design that utilizes a Mil-Spec lower with a standard magazine well. All you need to do is use the Charles Daly buffer with a standard lower, and you’re golden. You really need to use the buffer. In fact, according to the manual, if you don’t, the weapon could be damaged. The AR .410 is all AR, down to its controls, sights, and flat-top upper.

Breaking Down the Charles Daly AR .410

The National Firearms act ensures that we can’t get a carbine length barrel on our AR .410. Instead, we get stuck with a 19-inch barrel. It’s almost a rifle-length upper, but it doesn’t feel ultra-long or obnoxious. The weapon uses a thin profile barrel, so it feels balanced even with the longer barrel.

The Charles Daly AR .410 upper comes outfitted with a quad rail. Sadly the quad rail extends down about half the barrel. From there, we get an odd barrel shroud. The shroud can be removed to expose the thin barrel of the .410 bore. The advantages of half a quad rail are few and ensure a lighter weapon and a more balanced option.

The downside is that your ability to attach lights forward far enough to reduce barrel shadow is severely cut. However, I won’t be attaching really anything to this gun. I wouldn’t turn to a .410 for home defense. In general, they could’ve ditched the quad rail altogether and used a more affordable polymer handguard, and it would have been fine. Likely cheaper and certainly lighter.

The Mag and Sights

With the AR .410, you get a single five-round magazine. The aftermarket produced 10 and 15 rounders as well. The magazine and weapon only chamber 2.5-inch shells. The downside is that not all crimped 2.5-inch shells are the same length. The Charles Daly AR .410 can only use shells with an uncrimped length of 2.29 inches. A lot of buckshot loads are just a hair too long.

The gun comes with flip-up backup sights. A nice touch in a world where sights have become entirely optional on factory ARs. Plus, you have plenty of room for a red dot. Sadly, since the quad rail ends so early, you don’t get to maximize your sight radius. Still, a red dot would solve that problem.

The sights are rifle sights, and this is a shotgun. They see a too tight as peep sights, but it’s not a major complaint.

Those peep sights do make it quick and easy to aim. They can be adjusted, but it’s still just a shotgun, so I don’t get wrapped around the axel about it. As long as I could put buckshot on target accurately at 15 yards, I’m not overly concerned. The buckshot patterned nicely, and even out to 25 yards, I could hit a moderate size predator or even a white-tailed deer if you know how to shoot.

With birdshot, I could easily reduce a sizeable portion of the squirrel population in the local area. That might be where the peep sights of AR .410 suck. It’s tough to focus on a very small, fast-moving target when you are looking through peep sights. Now a red dot would be an entirely different conversation. Don’t forget that as winter sets in and rabbits get fat, that rabbit stew is tasty and warm.

The ergonomics are all AR 15. You want a real AR that functions as an AR and doesn’t just look like one, right? Well, that’s what you get with the Charles Daly AR .410. The charging handle is bigger and beefier than normal, but it’s all AR. The upper has a forward assist, and ejection port, and it has a last-round bolt hold open.

The controls are all AR 15, from the safety to the bolt lock and beyond! As such, all the ergonomics match with an AR. If you like the AR, you’ll like this gun. The longer barrel doesn’t feel super long, and the Charles Daly AR .410 is well-balanced regardless of the length.

That’s the big question. Charles Daly imports instead of producing products. Thus the AR .410 upper is made in Turkey. Turkish shotguns either run or they don’t, and we are looking at a budget-grade design. Gas-operated shotguns typically work, and this is a gas-operated design. A budget grade, semi-auto, gas-operated shotgun might be a jamomatic.

So with a handful of different .410 shells I went to the range and began blasting away. I was pleasantly surprised that the cheap Fiocchi birdshot target loads ran and ran well. These were the cheapest birdshot loads I had, and they all ran quite well.

So did some Aguila buckshot, but sadly my Federal buckshot was too long to fit in the magazine. However, I can safely drop the 2.5-inch shells into the chamber and single-feed the gun if necessary. I had one issue, and that revolved around the magazine. You can over-insert the magazine, and this will cause a first-round failure to eject.

After I pushed the magazine in, I gave it a tug downward, and then the AR .410 would run without issue. In fact, it became an absolute ton of fun. Double taps with a shotgun are a ton of fun, and the fact that it handles more like an AR than a shotgun makes it a blast to rapid-fire. Sadly, the five-round magazine doesn’t make your mag dumps a ton of fun.

The AR .410 is an absolute ton of fun, and I’m impressed, especially for the low price point. I’ve since ordered two extra 15-round magazines. I wish .410 ammo wasn’t so expensive because I think this will be one of my more common fun guns to break out.

What’s the point? Fair question. .410 isn’t the best shotgun caliber by far. However, it does recoil very lightly, and you can make fast follow-up shots. I can see myself hunting small game with this little blaster. I can also see it being a handy pest removal option. I live in an area with coyotes, and while a rifle would work, I like the limited range of a shotgun to mitigate any issues when dispatching these pests.

A .410 loaded with buckshot works wonderfully for dealing with these little pests. Plus, unlike a lot of other shotguns, I can easily outfit this AR .410 with AR accessories. This includes optics and lights. Heck, at the very least, it’s fun, and some guns can just be fun.