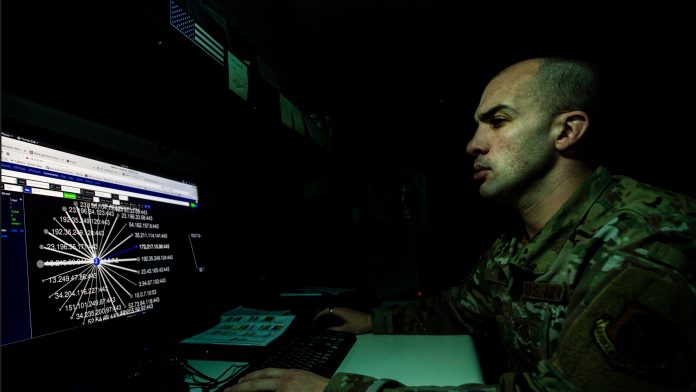 WASHINGTON: The Air Force is exploring new ways that artificial intelligence can be used to help with data collection and sharing efforts specifically for sensing operations, including bringing in a variety of data beyond just images to create an “integrated” intelligence picture, the service’s deputy chief information officer tells Breaking Defense.

The service has been working on automated target recognition (ATR) for a while, but “only as of late has the processing power of the systems that we were using really caught up to the aspirations of what we wanted to do with it,” Winston Beauchamp, Air Force deputy chief information officer, said in a June 15 interview.

“So back when we started the ATR journey, we were talking about hundreds of largely still images, largely black and white, coming in from overhead systems or airborne systems,” he said. “Now, we’re talking about thousands and we’re talking about full motion video and multispectral, in some cases hyperspectral [images], coming from a variety of platforms that are government and commercial. All of these have to be somehow processed and, ideally, find some way to stitch them together into an integrated picture.”

The Air Force has traditionally used a linear method to exploit that data, where each data stream is used for a specific purpose and they don’t necessarily cross over from one to another, he added.

The goal of the current effort is to get to the point where the “smarts of the system” can catch up to the exponential increase in data availability to perform real-time triage, identify items of interest in the field of imagery that has been collected and then integrate that with other sources that may have covered the same area in a recent period of time.

Ideally, it can also be integrated with other data collection that doesn’t have to necessarily be imagery — it could be electromagnetic in nature — and use the combination of those signals to get a better determination of what that data is.

“So for example, if you collect an image of a…ground radar…and you determine that there’s also an electromagnetic signal coming from it that you collect through another platform and then you integrate it together, then that’s really interesting and it’s quite useful,” Beauchamp said. “And so that, with the volume that we’re talking about of data, [is] the sort of thing that could benefit from AI as you move forward.”

The service is also looking at how AI can improve weather models for planning purposes, an area of increased importance as climate change can impact future operations, Winston said Tuesday at the UiPath TOGETHER Public Sector conference.

RELATED: Could ‘Weather Intelligence’ Take The Pentagon By Storm?

“Using AI, we’ve been able to enhance our weather models to take data that we don’t have ground-based sensors to collect, and extrapolate and interpolate between those data points to come up with weather predictions over parts of the world,” Beauchamp said during the conference.

Military weather planning doesn’t always use the same data that civilian forecasters do and can be a huge determiner of success or failure, he added.

In October 2021, the Pentagon released its climate change strategy that called for both the military and defense contractors to make changes to mitigate vulnerabilities caused by climate change.

“Climate change is going to be the context of the world that we live in from now on,” Richard Kidd, deputy assistant secretary of defense for environment and energy resilience, told reporters Oct. 8, during a roundtable following the release of the strategy. “No entity can opt out of their responsibilities or requirements to take necessary steps in either adaptation or mitigation.”