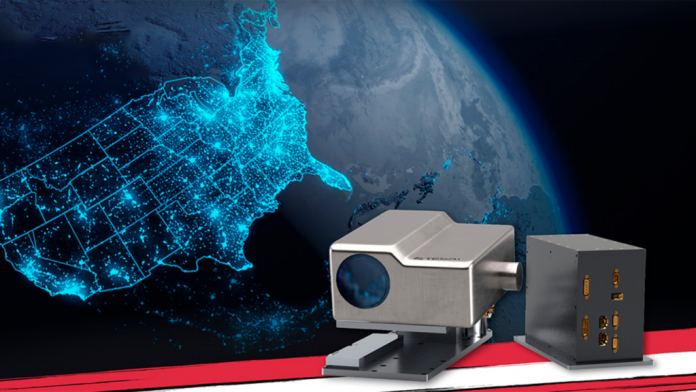 The firm Tesat, which develops optical communication technologies for space, is an Airbus subsidiary. (Graphic via Tesat)

WASHINGTON: After only two years of operations, the US arm of European aerospace powerhouse Airbus is mapping out expansion plans — with an eye in particular on moving some production of satellite laser communications terminals stateside.

“I would predict that we’ll be doing that in the next two years,” he added.

Optical communications systems, including optical intersatellite links (OISLs), are critical to enabling so-called meshed networks of large constellations of Low Earth Orbit (LEO) satellites being developed by governments and commercial firms, particularly for high-speed, internet-capable communications from space, although also for other missions such as remote sensing. For example, OISL’s are the linchpin of the Space Development Agency’s Transport Layer sats being developed as the data relay hub for the Pentagon’s ambitious Joint All Domain Command and Control (JADC2) effort.

Star trackers, despite their moniker, are not only used by astronomers to track stars and measure their distance from the Earth. Using sophisticated optics, modern star trackers also are employed to help precisely locate and follow a satellite across the night sky, and are used in positioning satellites and spacecraft while on orbit.

Geckle explained that currently Airbus produces most of what it calls “space equipment” in Europe, with its Tesat-Spacecom (Tesat) subsidiary, headquartered in Germany, developing laser comms terminals with “really discriminating capabilities and technologies.”

Tesat already provides optical terminals to four US prime contractors participating SDA’s Transport Layer and Tracking Layer efforts, as well as to the Defense Advanced Research Projects Agency (DARPA) Blackjack program, according to the subsidiary’s website. (It didn’t name the primes.) Further, the German firm announced in February that it intends to set up US manufacturing operations to meet growing demand for space-based laser communications terminals (LCTs).

Essentially, the job of Airbus U.S. is to leverage that technology, and other types of tech currently produced in Europe, for direct sales to US national security customers, company officials explain.

“What Airbus U.S. anticipates is to set up a Tesat U.S. manufacturing center within our SSA [Special Security Arrangement] to produce the current version of LCTs in the USA,” Morgan Keese, Airbus U.S. communications director said in an email. “We also expect that when modifications, derivatives or integrations will be required for U.S. classified customers, we will have USA-specific products in this space.”

Geckle noted that while Airbus U.S. does market platforms, the more “tantalizing” opportunities lie in finding a “discriminating technology” made in Europe and moving to “Americanize it” for military uses.

“Everybody wins. The shareholder wins, the taxpayer wins, the warfighter wins,” he enthused.

The company was created in 2020 to revamp Airbus’ sprawling network of specialized US subsidiaries via the creation of a centralized entity for US military sales — organizing under the aforementioned Special Security Agreement that requires a foreign firm to establish an independent US arm complete with a board of “independent directors” who hold, or are eligible for, security clearances. For example, the Airbus US board now boasts Frank Miller, a senior national security policy-maker in the Bush-era, and retired Air Force Gen. Willie Shelton, who retired as the head of Air Force Space Command in 2014.

A a specific goal at that time was to wedge open the highly classified US national security space and intelligence market. To that end, Airbus U.S. and the satellite communications firm OneWeb operate a joint venture in Merritt Island, Florida manufacturing small satellites.

Further, Airbus U.S. in January was one of five commercial firms to snag a study contract from the National Reconnaissance Office to provide synthetic aperture radar (SAR) imagery. Satellite-based SAR sensors can “see” at night and through clouds, and images from SAR commercial providers have been particularly in demand during the Russian invasion of Ukraine.

“I’m seeing some real momentum in, I’d say, the space in ISR segments,” he said. “Taking, for example, small sats. We’ve been able to be very successful — we could build up to two a day at our Merritt Island, Florida, joint venture.”

Noting that while he was unable to “get into specifics” on contracts, he added, “I see some real momentum on the US government side to sell what I would say is an improved bus, a larger bus about 350 kilograms.”

Geckle took over the reins of Airbus’ Virginia-based daughter firm in October 2021, and is vigorously looking to grow its business.

“I think that we’ve sort of punch below our weight in the US in the defense market,” he said. To be a “relevant” player in the US national security market, he added, “I personally consider you need to be a $2 billion revenue company. … We’re not there yet,” he said.

But while acknowledging it may “take years to get there,” Geckle is committed to pushing the company in that direction. “That’s my end goal,” he said.

New York’s Gun Laws Getting In the Way of Historical Reenactments?The Firearm Blog