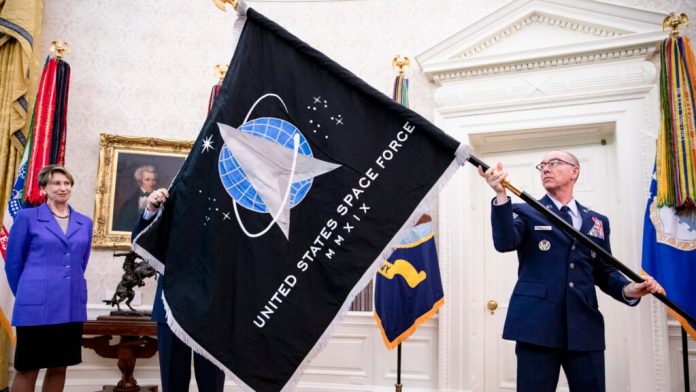 Chief Master Sgt. Roger Towberman (R), and CMSgt Roger Towberman (L), with Secretary of the Air Force Barbara Barrett present US President Donald Trump with the official flag of the United States Space Force in the Oval Office of the White House in Washington, DC on May 15, 2020. (Photo by Samuel Corum-Pool/Getty Images)

WASHINGTON: House lawmakers with their hands on Pentagon purse strings are taking the Space Force to task for including more projects in its fiscal year 2023 budget request than its five-year budget plan actually supports.

“The Committee cautions the Space Force against starting more programs than it can afford,” the House Appropriations defense subcommittee warns in its report on the fiscal 2023 defense budget, released today.

The HAC-D last week released its draft markup of the 2023 defense spending bill, but not the accompanying report language explaining its decisions. The draft bill for the most part fulfills Space Force budget requests — with a slight bump up for procurement and about a $300 million cut for research, development, test and evaluation (RDT&E). Today’s report, however, shows that Space Force spending plans have raised some eyebrows and that House appropriators are keeping a beady eye on not just annual requests but also the service’s budgeting across the five-year Future Years Defense Program.

“The lack of a credible five-year budget raises fundamental questions about whether any serious analysis or long-term planning has been done to assess the realism and affordability of the entire portfolio of programs — not just individual programs — or to set priorities among programs, including deciding not to start programs if they are not affordable within projected budgets,” the HAC-D report language elaborates.

The subcommittee report notes that the total Space Force 2023 budget request of $24.6 billion is a whopping 36% increase over the enacted 2022 budget. Some of that increase is explained by “the establishment of a new Military Personnel account, which was previously included in the Air Force budget, and the planned transfer of the Space Development Agency into the Space Force,” the report says, but notes that even after adjusting for those factors, the growth “is substantial, about 20 percent.

“Moreover, the Space Force’s ambitious plans for new architectures, programs, and mission areas, do not appear to be backed up with credible budget projections in the outyears to actually deliver these capabilities,” the lawmakers add.

Responding to the panel, a Space Force spokesperson told Breaking Defense today, “The Space Force will continue to provide Congress the information required to support its oversight role.”

According to the HAC-D report, the service’s FY23 request shows its budget peaking in FY24 and then declining through FY27 “to levels even lower than requested for fiscal year 2023.” And this is troubling lawmakers.

“The fiscal year 2023 budget request fails to clearly communicate the full funding and programmatic implications of what the Department of Defense is asking the Committee, and the Congress, to agree to in terms of cost, risks, uncertainties, and potential alternatives,” the report says. “The Committee reiterates its expectation that the Space Force’s plans and programs must be based on rigorous technical analysis matched with executable plans resourced by realistic budgets. The current plan does not meet this expectation particularly with respect to aligning priorities within realistic budgets.”

The HAC-D thus is directing Air Force Secretary Frank Kendall, through new his new assistant secretary for Space Acquisition and Integration, Frank Calvelli, to provide the House and Senate Appropriations Committees “with a briefing, including supporting analysis, an assessment of risks, and risk management plans” no later than Oct. 1 “on the projected cost, affordability, and executability of the full portfolio of classified and unclassified pro-grams and activities funded in the Space Force accounts.”