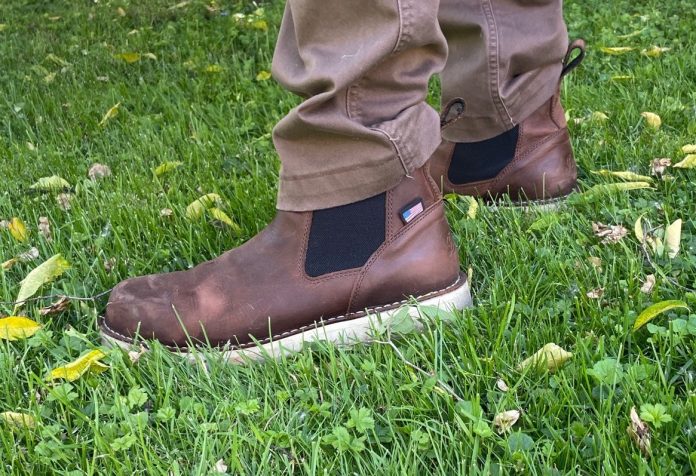 “Are you crazy?  Boots without laces!!!  That’s like a truck without tires!”

I imagine that was at least one of the reactions when the first lace-free boot was designed and released to the public.

Because unlike more casual slip-on footwear — say, penny loafers and boat shoes — boots are meant for workin’, not ambling around the docks at sunset with a gimlet in one hand and a Cuban cigar in the other.

Laces are key to ensuring your footwear does not fail you!  Remove them and all you’re left with is a glorified slipper of sorts… Or, maybe not!

Danner’s Bull Run Chelsea (BRCs) boots are lace-free and while they’re not traditional work boots for ironworkers or black-toppers or builders, they are a viable solution for those of us who want to toe the line (forgive the pun) between convenience and functionality.

The BRCs consist of an oiled, full-grain leather upper, a three-layered OrthoLite footbed, and a “non-marking, oil and slip resistant” Danner Wedge outsole.  The combination makes for a comfortable and durable boot that is, as advertised, super easy to take on and off.

The BRCs are a perfect indoor range boot or outdoor range boot (if the weather’s not bad).  Though I use them all season long, they’re really not designed to be a traditional outdoor or hunting boot.  The upper is unlined and uninsulated.  So if you’re hunting whitetail in late November, these are not the boots you’d bring.

Deep puddles and snow drifts also present a problem because they’re certainly not waterproof, especially with the elastic sides that expand to allow your feet to slide into the boots.

But in an everyday suburban context, they’re great. Whether I’m plinking at the local range, drinking a pint at my favorite tavern, or working out back in the garage, the BRCs are my go-to.

Aesthetically, that Danner brown goes great with my favorite pair of blue jeans, as well as most of the other pants I own. I wouldn’t sport ‘em at a wedding but anything short of that they’re more than passable.

Danner actually designed ‘em for electricians, carpenters, plumbers, and anyone else that might have to make a service call where it’s necessary to jump in and outta footwear.  Danner says they’re great for standing on “wood, tile or concrete,” but does not recommend them for long periods on asphalt.

You know, I counted all the pairs of boots I own, and in total, I have six pairs.  My tailgating boots (Timberlands), my cold-weather hunting boots (Irish Setter), my trail boots (Go Rucks), my old boots (not pictured), my hybrid sneaker/boot (Ridgemont Outfitters) and my Danner BRCs.  I’d venture to guess I wear my Danner BRCs 80 percent of the time.

In doing some research about these boots I noticed that though they received an overwhelming number of five-star reviews (85 of the 111 reviews were five stars), there were several buyers who complained about a seam on the heel that caused them discomfort.

For me, this wasn’t at all an issue.  In fact, the opposite was true.  From the outset, these were some of the most comfortable boots I’ve ever put on my feet.  There really was no break-in period to speak of. This is not true for the majority of the boots I own.  Most require at least a few days of wear before they start to fit right.

Critics may say that the price is the main drawback.  The MSRP is $200, though I’ve seen ‘em listed online from retailers for less, in the $180 range.

One might argue that if someone’s gonna spend that kinda money they might as well get a boot with more versatility — albeit one with laces, an all-purpose boot that is a jack of all trades but a master of none.  Danner makes plenty of boots that fit that description.

C. Travis recently reviewed Danner Recurve boots that while designed for hunting are also a great all-around boot.  You can check out his review HERE.

But for me, day-to-day, I’ll take my Bull Run Chelseas. #TeamNoLaces.

To learn more about the BRCs, visit Danner.com.

What You Need to Know before Buying Emergency Candles

In the USA alone $218 Billion dollars was spent on Advertising in 2018.