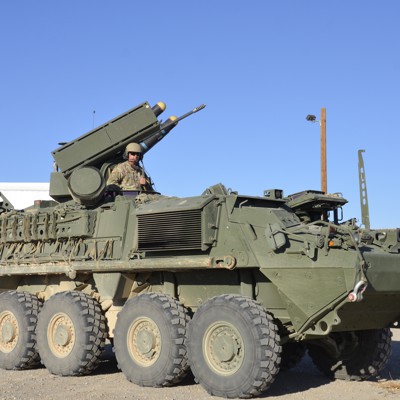 Leonardo DRS announced an agreement to merge with Israeli radar marker RADA, a move that would create a $2.7 billion publicly traded company.

Executives said the all-stock transaction would strengthen Leonardo’s portfolio of air defense and counter-drone products. The deal is expected to close by the end of the year.

“For us, this is a huge strategic win in that the one sensor we don’t have in our portfolio is radar,” Leonardo DRS CEO Bill Lynn said in an interview Tuesday shortly after the deal was announced.

Lynn said the merger will allow DRS to combine its organic technologies with RADA’s radar technology.

“We’ve known them a while,” he said. “They decided that they wanted…to look at strategic options. They have grown enormously over the past two or three years with their success and they came to the conclusion that they wanted more scale, more heft, more political weight.”

RADA does about 70 percent of its business in the United States. It is a supplier for Leonardo DRS’ Maneuver-Short Range Air Defense product, which puts guns, rockets, and sensors on a Stryker vehicle.

“The combination of the two companies really covers the waterfront in terms of force protection, so we think strategically this is a big move for us,” he said.

If the merger goes through, the resulting company will be among the 25 largest U.S. defense firms and in the top 50 globally. Merging with RADA will put the company “firmly in the mid-tiers,” Lynn said.

“The Leonardo DRS-RADA deal creates a stronger, more visible mid-tier U.S./global defense electronics firm,” Capital Alpha Partners analyst Byron Callan said in a Tuesday note to investors. “We don’t see this as a catalyst for immediate strategic follow-on moves in the defense sector, but it’s another event that’s part of an underlying trend. The resulting merger will create a larger listed defense contractor.”

If the deal is approved by regulators, Leonardo DRS would become a publicly traded company since RADA is already traded in the NASDAQ. Through a reverse merger, RADA would get 20 percent of the combined company and Leonardo the remaining 80 percent.

“That’s a big move for us because we wanted to go public because it will give us the financial and operational flexibility to do more strategic moves, more [mergers and acquisitions], more portfolio shaping, more investment in our technologies with that public platform,” Lynn said.

Leonardo, the Italian aerospace and defense parent of Leonardo DRS, canceled an IPO bid of its U.S. division last year.

Barnett: We Need to Challenge the Idea of Gun Ownership in America