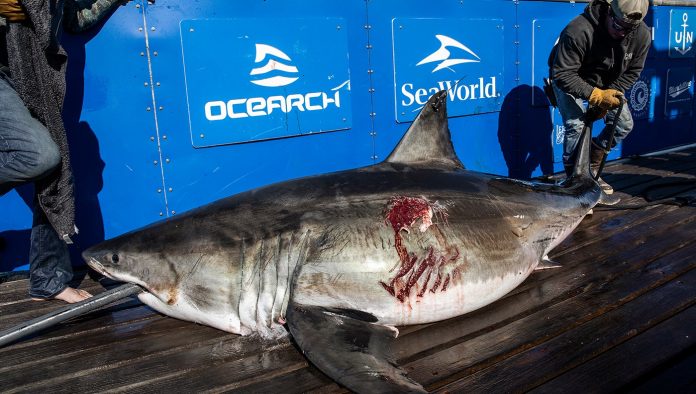 It’s summer feeding season again, the time when great white sharks cruise up the East Coast on their way from the Gulf of Mexico to cooler waters off Canada, hunting all along the way. A battle-scarred 12-footer named Maple, which surfaced in the Hudson Canyon off New Jersey last Friday, seems to be the latest to join the party.

A sub-adult female weighing in at 1,300 pounds and named after the national symbol of Canada, Maple was first tagged by OCEARCH, a global ocean research nonprofit, and released on September 14th, 2021, near Nova Scotia. Since then, she has traveled over 4,300 miles, swimming south to the southern tip of Florida by December, 25, reaching as far west as the Mississippi delta in February, returning to the Miami area by the end of May, and then heading up the coast to New Jersey over the past three weeks.

And she’s certainly not alone. Earlier this month, New Jersey angler Jim Piazza took video of a huge great white swimming right next to his boat as he returned from a fishing trip off the coast of Sea Isle City.

“I almost ran it over. My son was like pointing to it like, ‘Hey, there goes a shark.’ And I’m like, ‘No way!’ It was just kind of swimming north towards Ocean City,” Piazza told WPVI TV Action News.

Over the past three days, OCEARCH received pings from six of their tagged great whites up and down the coast, from South Carolina to Newfoundland. Crystal, last pinged on Saturday, just off Pleasant Bay in Maine, is the smallest of the lot at 10 feet, 460 pounds. Scot, a 13-foot, 1,644-pounder, who crashed Spring Break in Florida last March, is the largest of the six and was last registered on Sunday just off Long Bay near the South Carolina-North Carolina border. OCEARCH has tracked several other great whites, including Mahone, a 1,700-pounder, and Ironbound, in that stretch of coast over the past month.

But Maple may be the most distinctive of the crowd. She has very noticeable scars on the left of her body, which the OCEARCH team believes were likely caused by interaction with another larger white shark. OCEARCH states that, “This interaction was possibly an example of dominance behavior. It is not uncommon for sharks to show their dominance over a smaller animal of their species by delivering a significant but non-fatal bite.”

Ocearch tags and tracks great white sharks (Carcharodon carcharias) and other marine animals to better understand their migrations patterns and protect them from extinction. Their ship, the M/V OCEARCH, is equipped with a 75,000-pound capacity hydraulic platform. When the research team hauls a great white onto the deck, they use hoses to keep the beast’s gills hydrated and gather up to 12 biosamples in 15 minutes. Before releasing the specimen, they attach acoustic, accelerometer and SPOT tags, which work in coordination with a global positioning satellite. When a tagged shark approaches the surface of the water, its tracker will “ping” to notify researchers of its location.

According to OCEARCH, “Great white sharks are central to the functioning of ecosystems and the maintenance of biodiversity.” Tagging helps researchers learn about the sharks migration habits, and how and where they mate and raise their young. As the sharks’ summer feeding season heats up, East Coast anglers can expect to hear about more pings from great whites cruising in local waters.