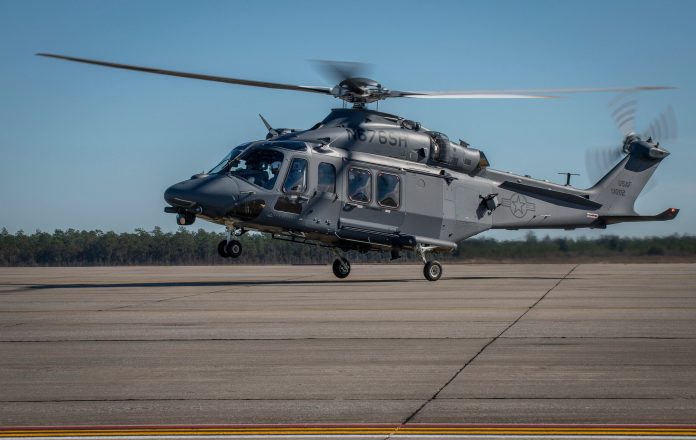 The MH-139A Grey Wolf lands at Duke Field, Fla., Dec. 19, 2019, before its unveiling and naming ceremony. The aircraft is set to replace the Air Force’s fleet of UH-1N Huey aircraft and has capability improvements related to speed, range, endurance and payload. (U.S. Air Force/Samuel King Jr.)

ST. LOUIS, Mo.: Despite continued challenges pushing the Air Force’s new MH-139A Grey Wolf helicopter through the certification process, Boeing hopes to have the chopper completely certified and delivered to the service by the end of this summer, company officials said.

A production decision — known in the defense world as Milestone C — is now anticipated to occur in 2023, having slipped from the original date of September 2021, said Mark Cherry, Boeing’s vice president and general manager of vertical lift program.

“The certification process has taken longer than we expected without a doubt,” Cherry said last week via teleconference to reporters gathered for briefings at Boeing’s St. Louis facilities ahead of Farnborough Air Show next month. Breaking Defense accepted airfare and hotel accommodations from Boeing as a part of the trip.

“The COVID situation hurt that because some of that certification … required folks to get eyes on aircraft parts,” he said. “And there’s a lot of challenges in terms of getting people to the right place at the right time doing that in safe manner.”

“Last year, program officials stated that the aircraft design would become more stable once the aircraft obtained certification for demonstrated compliance with Federal Aviation Administration (FAA) requirements,” the GAO stated in the report. “However, according to program officials, the certification has yet to occur because Boeing experienced challenges integrating components that are new to the existing airframe. For example, some of the aircraft’s new parts need to be redesigned as a result of certification testing.”

The GAO also reported that the Air Force is now withholding 10% of its progress payments to Boeing due to the company failing to submit contractually required data on time. Asked about this issue, Cherry said, “We’ve been extremely transparent along the way, our Air Force partners know exactly where we are, and they know what we’re working on.”

The primary driver of delays, Cherry said, is the work the FAA needs to accomplish to certify the military-specific technologies aboard the helicopter, such as the identification friend or foe system used to classify different aircraft within a given area.

However, when asked how many subsystems will require redesigns due to findings from the certification process, he declined to comment, stating only that “there hasn’t been a radical redesign” of the helicopter as a whole.

Last summer, the Air Force disclosed that Boeing was forced to redesign a sensor faring for the Grey Wolf after it was discovered that certain conditions could lead to inaccurate air speed readings, which could then increase the chances of a crash.

Col. William Rogers, the service’s program executive for intelligence, surveillance, reconnaissance and special operations forces, said then that Boeing was in the process of testing multiple design options.

The Air Force intends to buy five Grey Wolf helicopters for $156 million in fiscal 2023, and has already procured the first eight MH-139As. Over the lifetime of the program, the service plans to buy 84 helicopters to replace the UH-1N Huey.

Gun Meme of the Day: A Shot at the XD Edition