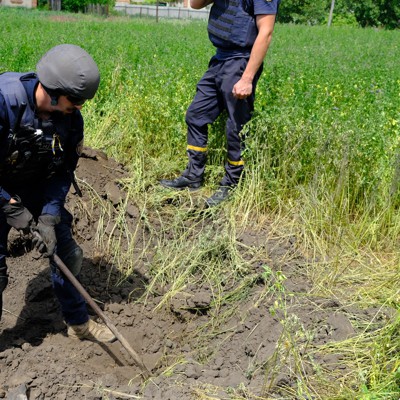 The United States will make no new anti-personnel land mines and will use existing ones only on the Korean peninsula, reinstating Obama-era limits undone by the Trump administration, White House officials said Tuesday.

The new policy follows more than a year of efforts by advocates and like-minded lawmakers to convince President Joe Biden that the Trump rules hurt civilians and reduce America’s credibility with allies. Advocates welcomed the change but urged the White House to end the U.S. use of land mines entirely.

“The latest policy shift has moved the U.S. closer to compliance with the 1997 Mine Ban Treaty, yet the administration still pauses at the finish line,” said Jeff Meer, the U.S. executive director of Humanity & Inclusion, an non-governmental organization that co-founded the International Campaign to Ban Landmines. “The fact that the U.S. has refrained from using or trading antipersonnel land mines for nearly 30 years, and is counted as the global community’s most generous funder of land mine clearance, but still won’t join the treaty, is an ironic and historical oddity. This great contradiction leaves thousands of lives at risk.”

Land mines are buried weapons that are designed to harm troops or military vehicles that pass over them and trigger an explosion. But thousands of civilians are hurt or killed each year by mines emplaced in war zones or left over from past conflicts.. In 2020, more than 2,000 people were killed by land mines and more than 4,500 were injured, according to a report released in November.

“The use of these weapons put more civilians at risk of being injured by unexploded mines, including children, long after the fighting has stopped,” John Kirby, the National Security Council’s coordinator for strategic communications, said at the White House.

The Biden administration’s policy prohibits the United States from developing, producing, or acquiring anti-personnel land mines. In addition, the U.S. can’t export the technology except to help detect and remove existing land mines, and the Pentagon can’t use land mines outside of the Korean peninsula. The administration is also expected to begin destruction of all land mine stockpiles not required to protect South Korea.

“The world has once again witnessed the devastating impact that anti-personnel land mines can have in the context of Russia’s brutal and unprovoked war in Ukraine, where Russian forces’ use of these and other munitions have caused extensive harm to civilians and civilian objects,” Adrienne Watson, a spokeswoman for the National Security Council, said in a statement. “President Biden is committed to continuing the United States’ role as the world’s leader in mitigating the harmful consequences of anti-personnel land mines worldwide.”

Advocates applauded the changes announced by the White House, but pushed Biden to go even further, including urging the administration to remove land mines from the Korean peninsula and join the Ottawa Treaty, a ban on the use of land mines signed in 1997 that is supported by 162 countries. The United States, along with Iran, China, Russia, Pakistan, and Syria, are some of the countries that have not signed the treaty.

In 2014, President Barack Obama announced that the United States would destroy land mines and ban their use everywhere except the Korean peninsula, but he also stopped short of signing on to the global ban on the weapons.

Trump rolled back those prohibitions in 2020 and expanded where land mines could be used, announcing that combatant commanders could authorize the use of the weapons “in a given operational context, such as in certain major combat operations involving U.S. military forces.”

During the campaign, Biden slammed Trump’s decision as “another reckless act by a president ill-suited to serve as commander-in-chief,” and promised to “promptly roll back this deeply misguided decision” once he was president. But in April 2021, the Pentagon announced it would keep the Trump administration’s policy in place while the issue was still under review, and called land mines “a vital tool in conventional warfare” that the military “cannot responsibly forgo.”