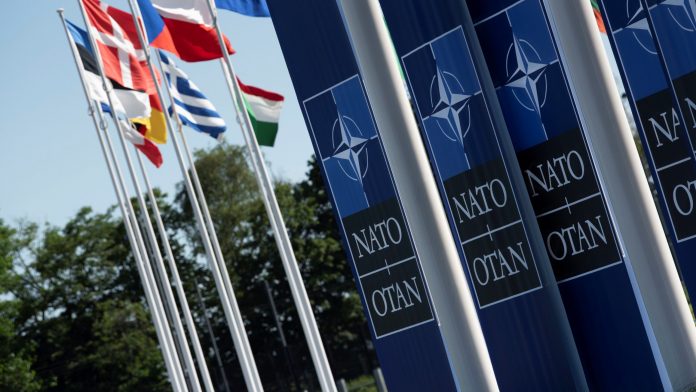 Flags fly in front of NATO’s headquarters in 2019. (DoD photo by Lisa Ferdinando)

Recently, Spain celebrated the 40th anniversary of its decision to join NATO. In a situation few thought possible at the start of February, the upcoming NATO summit conference in Madrid will feature major discussions around Finland and Sweden’s push for membership. For those of us who lived through the push to get Spain into the alliance in the 1980s, there are echoes that are hard to ignore.

The decision by Spain 40 years ago was seen as a referendum about Russia’s ability to hold nations in a more neutral stance. It also came with serious questions about whether the Spanish government could sell alliance membership to a skeptical public, large chunks of which viewed American military bases in their country as part of the Fascist past, not the democratic future.

That skepticism came out just four years later, when a socialist government came to power and held a national referendum on, essentially, whether to stay in NATO. After significant debate, and political conflict,  the country voted in favor of the alliance, but in the moment it was far from a sure thing.

At the time, I was at the Institute for Defense Analysis, as part of a team on a DoD contract that did significant work with the Spanish in the run up to the NATO referendum. We worked closely with the José Ortega y Gasset Foundation in Madrid in setting up seminars and then a conference in Toledo, which brought together senior Spanish officials and commentators to debate the way forward for Spain. A key player in our efforts was my friend and colleague Dr. Kenneth Maxwell, a noted historian, who helped shape the effort, as well as my colleague Susan Clark, with whom I had worked for several years first at the Center for Naval Analysis and then at IDA on assessing Soviet assessments of Europe and the Alliance. (A discussion of our work dealing with Spain and defense in this period was provided in Maxwell’s 1991 book.)

We had discovered a very useful and not widely known Soviet general staff publication which provided detailed assessments of NATO European nations and their forces. We closely examined articles in that publication, which then provided insight into how the Soviet military really regarded the state and role of Western European military forces and how the Soviets would try to deal with those forces in case of general war.

We first used information garnered from the publication to generate a perspective on how the Soviets looked at France and how they assessed the impact of the French deterrent and military policy within the alliance. We discovered that they took these capabilities seriously enough to plan on counter-actions early in any significant conflict, rather than waiting for the outcome of a campaign in the inner German border. This assessment was read closely by the French government and had an impact on the Mitterrand administration’s thinking and became part of my engagement working with the French government as well in the Mitterrand Administration’s evolving policy towards the Soviet Union.

We discovered something similar with regard to Spain and its impact on military options for the United States and NATO, and began to realize that from the Soviet point of view, the ability to use Spanish territory in a broader European campaign meant almost certain defeat for Moscow. They would face both a Northern and Southern European logistics path which would make defeat of the United States and the Europeans very difficult indeed. Susan presented the findings of the assessment at the Toledo conference, and it had a major impact on the Spanish audience.

The key point here: enter into an honest discussion of the threats being posed by adversaries and find common ground, and it will help make a much stronger case to allies. And allies the Spanish remained, and they brought with them new ways of thinking about NATO operations.

The Spanish government and elite brought very specific military reform efforts to shaping their way ahead within NATO, notably after having lived through the Franco period. Those reform efforts shaped not only how Spain prepared for its role in European defense but had impacts as well on other European allies. There simply was no straight-line projection from the military past under Franco to how Spain would reshape their forces and strategy going forward as part of NATO and then the European Union,

RELATED: What Finland will bring to NATO – and how it might change the alliance

Now we are facing the prospect of Sweden and Finland entering NATO. Just like Spain, these latest NATO expansion partners were never part of the Warsaw Pact. But their entrance breaks decades of tradition — neutrality and “Finlandization” — which like Francoism have made them distinctive within Europe. And each have indigenous defense industries which have supported their ability to defend themselves. The coming of Sweden and Finland will not look like the Eastern expansion, but more akin to the Spanish development, whereby older national traditions are re-defined and new defense approaches shaped. And this means for NATO that the alliance will be changed significantly.

As a result, expect NATO to emerge out of this month’s Madrid conference with a new strategic concept, although it will be, at best, a preliminary one. The Russians are rewriting European history in Ukraine, and Sweden and Finland will be key players in both interpreting that history and reshaping how Europe acts going forward in defense and security policy. As sovereign states with a long history, like Spain before it, their national traditions will reshape the European and transatlantic approach in ways as yet unknown.