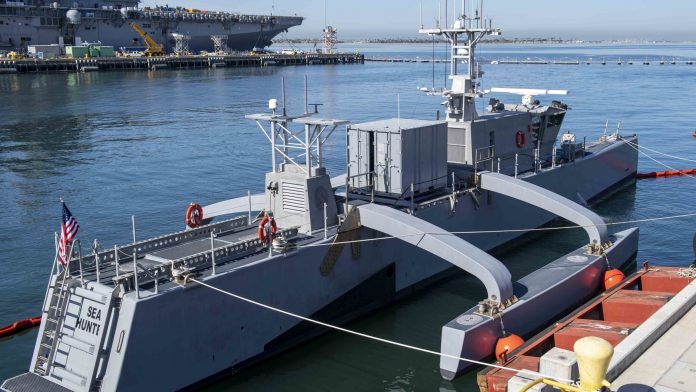 WASHINGTON: The Navy is poised to begin a competition among industry for a key contract related to its autonomy software development efforts, one that will secure a vital if largely behind-the-scenes role for the winning company in many of the service’s upcoming unmanned vehicle programs, the service told Breaking Defense.

The contract has been dubbed the Autonomy Baseline Manager, and the service’s unmanned systems program office expects to publish a solicitation for the role in the coming months, according to Navy spokesman Alan Baribeau. A five year-contract for the selected company is scheduled to be awarded in summer 2023.

The ABM “serves a central role” in the program office’s “autonomy ecosystem” and will facilitate “activities integral to the unmanned maritime autonomy baseline repository software, processes, tools and procedures,” according to slides about the competition published in July 2021 and obtained by Breaking Defense through a Freedom of Information Act request.

To put it another way, the service is developing a myriad of unmanned vessels and needs to streamline the process of making sure each drone will be capable of working in conjunction with one another. To do this, the unmanned systems office, known internally in the Navy as PMS 406, has been spearheading several projects that collectively aim to unify different software delivered by any given company.

At the center of those efforts is the Rapid Autonomy Integration Lab (RAIL), a software factory around which much of the ground-level work to do the work will revolve. The ABM winner will be the Navy’s contractor of choice to keep that work moving smoothly.

“The vision for the RAIL is that many industry partners … will bring their code to the RAIL,” Capt. Pete Small, the former program manager, told Breaking Defense last year. The ABM is intended to be “that support infrastructure to help manage the process, enforce the standards, configuration management, and just overall execution of the development and certification period and software.”

The slides, which are dated July 2021 and were used in conjunction with a non-public industry day, offer some glimpses into the service’s ABM efforts that were not previously public. For one, the timeline to award the contract has slipped by roughly nine months. Baribeau, the Navy spokesman, told Breaking Defense the schedule was adjusted to give the service time to implement feedback industry has provided.

The slides also outline a general timeline for when the Navy will issue separate contracts targeting changes to the software architectures for the service’s major unmanned vessel programs. The timelines are labeled as “notional,” meaning they could be subject to change as the service moves forward. 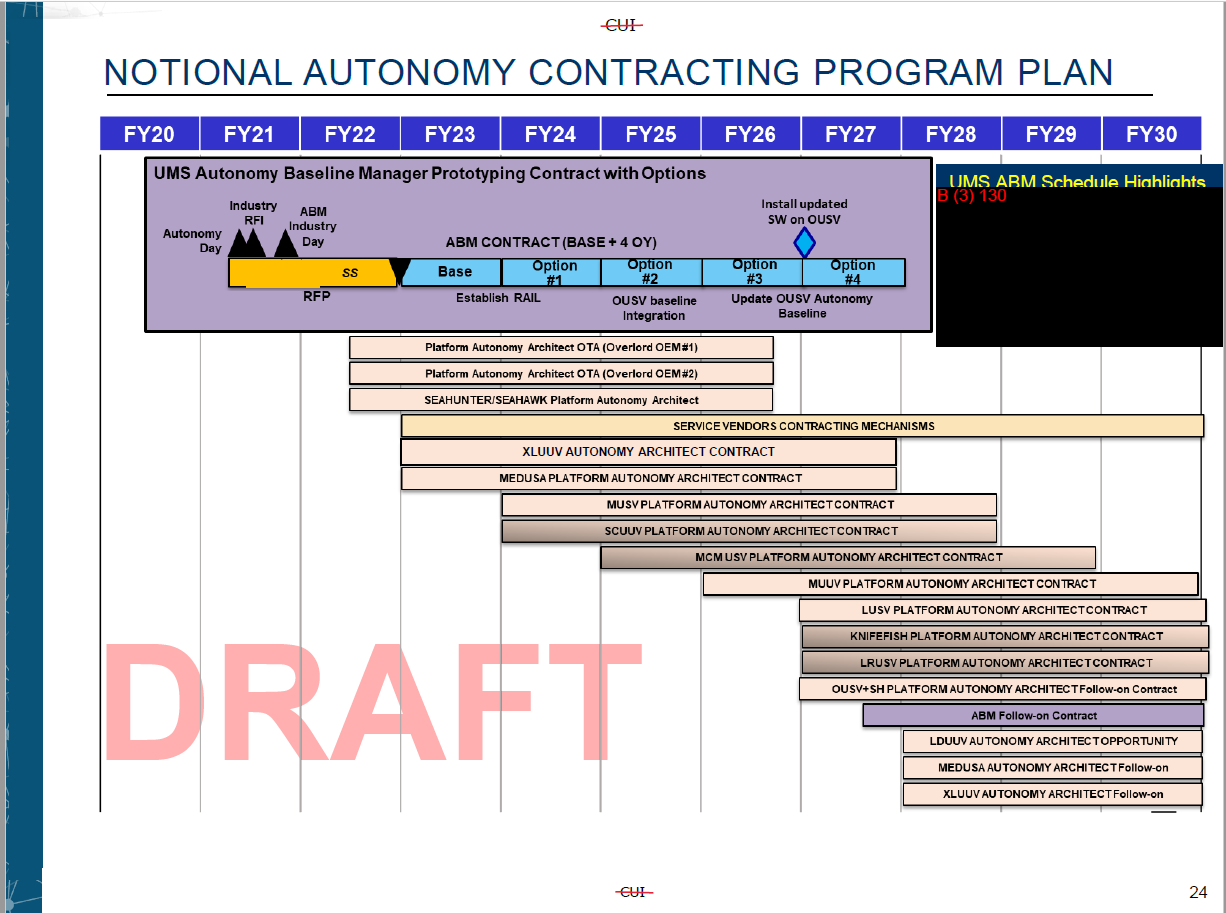 A slide from a Navy powerpoint that depicts the schedule for the autonomy baseline manager project. (US Navy)

“These are representations of future separate contracts designed to support a process by which to transition current individual software architectures to [Unmanned Maritime Autonomy Architecture] compliance and increasingly into a competitive environment,” Baribeau told Breaking Defense about the slide.

The Unmanned Maritime Autonomy Architecture is a separate but related Navy effort that aims to standardize the software being used across the service’s unmanned programs to create a “plug-and-play” environment in which any vendor can develop payloads and upgrades for any other platform.

“Feedback received during [the] industry day is helping to refine the Navy’s contracting strategy. This includes optimizing a myriad of interests such as near, mid, and far term approaches to ultimately realize UMAA compliance and maximize use of DevSecOps practices through the RAIL,” he continued.

The ABM contract, the UMAA and other unmanned efforts are all part of the Navy’s larger effort to ultimately convince lawmakers to invest in unmanned technology more aggressively, which as Breaking Defense reported earlier this year, embraces an “evolutionary” approach.

Huk’s New Men’s A1A Pro Guide Pant Made By the Pros, Available for Everyone