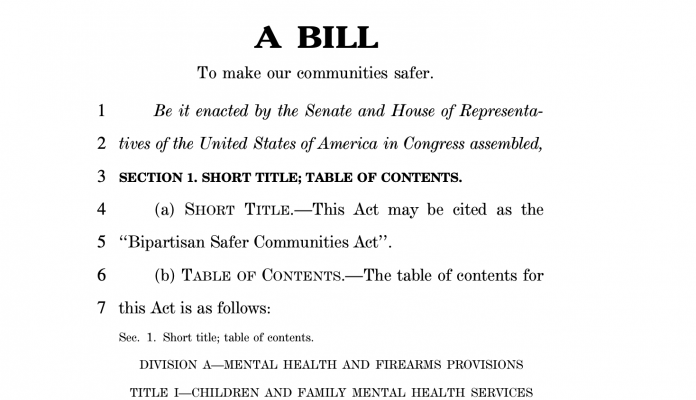 In a procedural vote on Tuesday, the U.S. Senate agreed to the first major gun control package in nearly 30 years.

By a vote of 64 to 34, the upper chamber gave the green light to what’s known as the “Safer Communities Act” (SCA).

With 14 Republicans backing the SCA, it has enough support to override a filibuster led by pro-gun lawmakers.

The threshold to break a filibuster in the Senate is 60 votes which means that if no one changes their vote between now and when the SCA goes to the floor for the official vote, it will clear the Senate and then head to the House for consideration.

Senate Majority Leader Chuck Schumer (D-NY) already indicated that the upper chamber will “move to final passage as soon as possible,” which could be by week’s end, according to Fox News.

Speaker of the House Nancy Pelosi (D-CA) is eagerly awaiting its arrival.

“After the Senate passes this bill, the House will swiftly bring it to the Floor so that we can send it to President Biden’s desk,” Pelosi said in a statement.

Meanwhile, Gun groups were quick to go on the offensive, panning the Safer Communities Act as nothing more than a way to chill the 2A rights of responsible citizens.

“However, we will oppose this gun control legislation because it falls short at every level. It does little to truly address violent crime while opening the door to unnecessary burdens on the exercise of Second Amendment freedom by law-abiding gun owners,” NRA continued.

Likewise, Gun Owners of America criticized the bill, saying it would “encourage Backdoor Universal Background Checks by redefining many private sellers as gun dealers, financially incentivize states to enact unconstitutional ‘red-flag’ laws, and would allow for so-called ‘enhanced background checks,’ which are arbitrary delays in transferring firearms to adults not yet 21 years-old.”

Here is the list of the 14 Republicans who are backing the SCA:

Here is the full text of the Safer Communities Act:

Here is a section-by-section breakdown put out by lawmakers:

Both the NRA and GOA have links that you can use to contact your respective Senators to urge them to vote “NO” on the “Safer Communities Act.”

Failure to take action will guarantee a major win for the anti-gun lobby. Many of their leaders are currently celebrating on social media:

This time IS different. Organizing works. Really excited to see the Senate introduce the Bipartisan Safer Communities Act led by Senator Murphy. It’s not enough, but it’s lifesaving and it’s just the start. Let’s get the bill passed.

IT’S WORKING! “…both Senate leaders’ swift statements of support suggest public sentiment in favor of toughening gun laws had finally broken through in Congress.”@MomsDemand and @StudentsDemand volunteers have driven OVER 1 MILLION messages to the Senate.

I’ve always said this fight would be long. But we organized, we voted, we never gave up.

This is a historic moment for our country.

How to Grow Your Own Coffee

‘I was very drunk’: Video shows NYC man try to set restaurant on fire for getting chicken biryani order wrong, but ends up lighting...