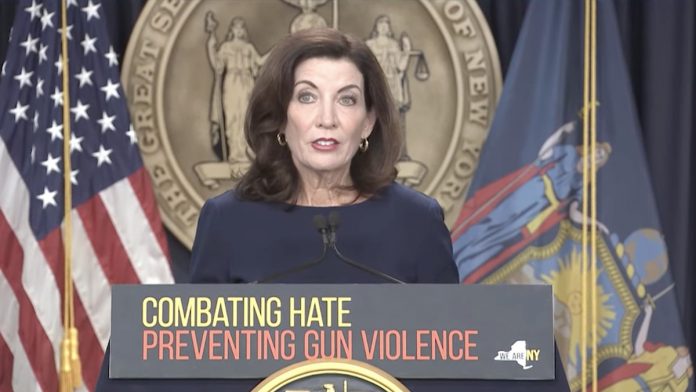 In a HUGE win for 2A rights, the Supreme Court today struck down New York’s restrictive “may-issue” standard that requires one to provide to the government a “proper cause” to bear arms outside the home as part of the concealed-carry licensing process.

Under this system, government officials could arbitrarily deny a law-abiding citizen’s concealed-carry application on the grounds that one’s “proper cause,” or reason for needing a permit, wasn’t sufficient.

Citing one’s natural right to self-defense or constitutional right to keep and bear arms, in many cases, wasn’t enough to convince local judges and chief law enforcement officers that the applicant was deserving of a permit.

“In this case, petitioners and respondents agree that ordinary, law-abiding citizens have a similar right to carry handguns publicly for their self-defense. We too agree, and now hold, consistent with Heller and McDonald, that the Second and Fourteenth Amendments protect an individual’s right to carry a handgun for self-defense outside the home,” Justice Thomas wrote.

“Because the State of New York issues public-carry licenses only when an applicant demonstrates a special need for self-defense, we conclude that the State’s licensing regime violates the Constitution,” he continued.

Altogether, there are nine states that have a may-issue permitting scheme. They are, per USCCA:

Following this landmark decision, they will need to remove their “proper cause” mandate and adopt a permitting process that doesn’t run afoul of the Constitution.

Story is breaking, stay tuned for more analysis and reaction.

BREAKING: SCOTUS just issued their opinion in NYSRPA v Bruen and they got it wrong. As our gun violence crisis gets even worse, SCOTUS has decided to cave to the gun lobby’s extreme agenda and make it harder for states & cities to protect public safety. #GunLawsSaveLives

In response to this ruling, we are closely reviewing our options – including calling a special session of the legislature.

Just as we swiftly passed nation-leading gun reform legislation, I will continue to do everything in my power to keep New Yorkers safe from gun violence.

BREAKING: SCOTUS just issued their opinion in NYSRPA v Bruen and they got it wrong. As our gun violence crisis gets even worse, SCOTUS has caved to the gun lobby’s extreme agenda and will make it harder for some states and cities to protect public safety. #GunLawsSaveLives

The Intelligence Community Doesn’t Warn About All Attacks Against the US Homeland. Why Not?