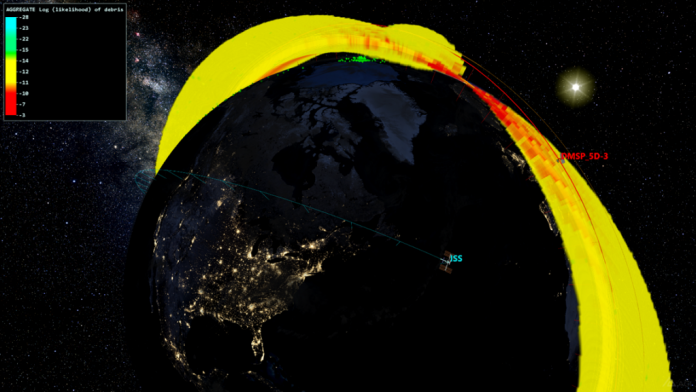 Path of the debris from Russia’s Nov. 15 ASAT missile test over the first 24 hours after impact with the Soviet-era Cosmos 1408 satellite, according to COMSPOC. (COMSPOC/CSSI volumetric analysis, with rendering by AGI, an Ansys Company)

The House Armed Services Committee in its markup of the fiscal 2023 National Defense Authorization Act (NDAA) directed Secretary of Defense Lloyd Austin to provide Congress with the new strategy within 90 days of the policy bill’s enactment. The language, drafted by the HASC strategic forces subcommittee, was approved by the full committee today — although the final vote on the complete NDAA package is not expected until tonight.

“Both Russia and China have demonstrated the capability to target, degrade, and destroy satellites on orbit, whether through kinetic or non-kinetic means,” the language stresses.

The new strategy must specify “the actions that will be taken to defend and protect on-orbit satellites of the Department of Defense and the intelligence community […].”

Furthermore, the language pointedly directs the Defense Department to make the strategy “publicly available in an unclassified form,” although it does provide for provision of a classified annex “containing supporting documents.” The language suggests that the lawmakers are trying to push the shadowy envelope of top-level secrecy that surrounds Pentagon plans and capabilities to combat adversary space and counterspace capabilities. For example, while DoD issued a public summary of a so-called “Defense Space Strategy” in 2020, the actual “how” of the high-level (and unsurprisingly vague) goals was confined to a classified version.

Further signaling lawmakers’ concerns about the need for stronger Pentagon action to shore up US national security space assets against threats, the HASC also would require Space Force to establish specific requirements for satellite protection prior to starting any major new acquisition program.

The HASC NDAA language directs the Space Force and Space Command to approve “requirements for defense and resilience against the capabilities of adversaries to target, degrade, or destroy the satellites” prior to any major space acquisition program achieving Milestone A. Milestone A is the first decision point in the Pentagon’s complicated acquisition process, essentially meaning that development and procurement strategy for the new program has been okayed.

“…even all the isles of the heathen.”