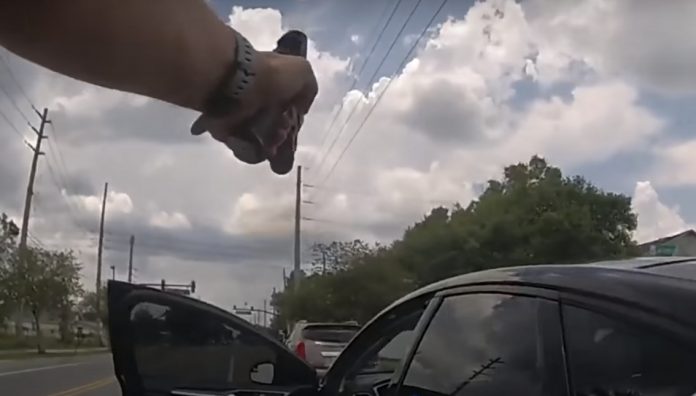 The Orlando Police Department has released footage of a deadly traffic stop shooting that took place May 18th on Mercy Drive in Orlando, Florida.

A suspect opened fire on two officers after he was pulled over. Both officers were unharmed but the suspect was fatally wounded during the exchange.

Bodycam footage, as well as the police report, shows two officers in an unmarked vehicle trying to pull over 28-year-old Carlos Delano Dafill Roberts Jr. for passing in a no-pass zone.

While the officers’ vehicle was unmarked, the officers were in uniform, and sirens and lights were put on during the pursuit.

When Roberts pulled over, he immediately stepped out of his vehicle to shoot at the officers before they even exited their vehicle.

About 1:10 into the body camera video, the first shots can be heard hitting the police cruiser. At 1:13, the female officer is seen drawing her weapon and returning fire as she backs up toward the rear of the cruiser.

The male officer can be heard shouting into his radio, “Shots fired.” The officers both returned fire and ducked, and the video shows footage of the windows of the patrol car being shattered.

Investigators said that Roberts had no violent criminal history, but many traffic citations.

Roberts fled the scene, but soon after, crashed his car. He was then taken into custody. It is unclear what injuries he sustained.

Initially, at the hospital, Roberts was said to be in stable condition. After receiving medical treatment, he was then supposed to head to the Orange County Jail, where he would be booked for a multitude of charges.

However, Roberts never made it out of the hospital. A little over two weeks after the incident, he succumbed to his injuries.

Roberts was facing charges such as attempted murder of law enforcement officers, shooting into an occupied vehicle, and fleeing and eluding.

The Florida Department of Law Enforcement is handling the investigation, along with the State Attorney’s Office. An internal investigation is underway by the Orlando Police Department.

How to Mail Guns (Legally and Without Going to Jail)

“…shall strengthen thine heart: wait, I say, on the Lord.”