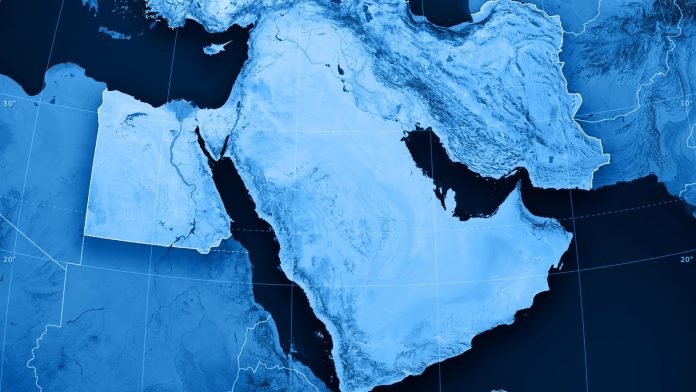 DUBAI: The growing perception of Iran’s aggression in the Middle East, along with Washington’s desire to reduce Russian and Chinese influence in the oil-rich Gulf Arab states, has prompted intense bouts of diplomacy in recent months that could lead to major tectonic shits in the political and military landscape.

Many reports have surfaced in past weeks regarding significant developments in play that will likely come together during President Joe Biden’s expected visit to the region next month, according to analysts who spoke with Breaking Defense.

The idea of a new defense alignment was underlined Friday when Jordan’s King Abdullah II said he would support the creation of a Middle East alliance similar to NATO, telling CNBC “I would be one of the first people that would endorse a Middle East NATO.” However, he noted, “The mission statement has to be very, very clear. Otherwise, it confuses everybody.”

More broadly, Abdullah said, there is a growing sense in the region that nations facing similar threats need to work together.

“I’m hoping what you’re seeing in 2022 is this new vibe, I guess, in the region to say, ‘how can we connect with each other and work with each other,’” he said.

Abdullah’s comments are the strongest from a regional leader on this issue, but perhaps not as eye-raising as what occurred Monday, when Israeli Defense Minister Benny Gantz announced on Monday that Israel has joined what he called the Middle East Air Defense Alliance (MEAD), a US-led regional air defense network that includes some Arab countries. Although Gants did not name the Arab countries, many observers assume that MEAD would likely include the UAE, Saudi Arabia, Bahrain, Qatar, Egypt, and/or Jordan.

But it’s unclear at what stage the arrangement is currently in and, analysts said, MEAD and any further defense cooperation is contingent on the US settling outstanding tensions with different players in the region.

When rumors of the defense arrangement circulated earlier this month, a White House spokesperson told Breaking Defense only that the US “strongly support[s] Israel’s integration into the broader Middle East region, and this will be a topic of discussion when the President visits Israel.”

Iran has invested heavily in developing its arsenal of ballistic and cruise missiles as well as attack drones, which has made it imperative for all of Iran’s regional opponents to bolster their air defense systems and improve early warning capabilities by linking up with their neighbors and the US, which has substantial military presence in the Middle East.

Although UAE, Bahrain, Egypt, and Jordan have signed peace treaties with Israel and established diplomatic relations, they have not formed any formal military alliances or engaged in defense cooperation programs.

“I would not say there is a military alliance being formed between Israel and some Arab states, because an alliance involves drafting written agreements that would be binding to all the signatories,” said Abdulkhaleq Abdullah, a UAE political science professor. “What we have is more of an axis taking shape based on understandings between Israel and other Arab states.”

Abdullah added that the UAE and Saudi Arabia were working on establishing an axis of “moderate” Arab states that will be more open towards cooperation with Israel in efforts to enhance regional security – including air defense.

“Iran’s hostile actions along with its ongoing nuclear program are raising fears everywhere in the region and has transferred Iran into a common enemy or adversary to many Arab and non-Arab countries in the Middle East,” said Abdullah.

Saudi Arabia, a major Arab powerhouse, has not signed a peace treaty with Israel and does not have diplomatic relations with it. However, some Saudi defense analysts do not doubt the possibility of Riyadh being part of MEAD, provided that the United States settles all its outstanding disputes with the Kingdom and reassumes its role of the security guarantor of the region.

“The region is on the verge of major changes that I expect to materialize in the very near future and it will include a form of security cooperation between Israel and Arab states,” said Abdallah Ghanem Al Kahtani, a retired Major General from the Royal Saudi Air Force. “This is only logical if we take into consideration the threats posed by Iran and its allies to most countries of the region.”

However, Saudi Arabia will not give anything for free.

“I believe Saudi Arabia will have its conditions and terms in its dealings with the United States and others,” noted Al Kahtani. “I believe the preparations being made by US officials for the coming trip of President Biden to Riyadh are aimed at rectifying the relations between the two states.”

Abdullah pointed out that many US government institutions and private corporations have put pressure on Biden to reconsider his policies towards Saudi Arabia “especially his personal relationship with Saudi Crown Prince Mohammed bin Salman” who is often referred to as MBS.

Biden had vehemently criticized MBS in the past, especially over his alleged role in the killing of a prominent Saudi journalist and dissident Jamal Khashoggi in Turkey in 2018. The CIA investigation into the incident concluded that MBS likely had ordered the assassination. MBS, who denied ordering Khashoggi’s death, is regarded by many as the de facto ruler of Saudi Arabia due to the poor health of the Monarch King Salman bin Abdulaziz

“The United States, if it truly considers the Gulf Arab States as its strategic allies and partners, it must provide tangible security protection against threats posed by Iran and its allied terrorist groups,” said Al Kahtani. “There should be clear, legally-binding defense agreements between the Gulf Arab States and the US that cannot be retracted or ignored by future American presidents.”

Saudi Arabia has been pressing for more US support in confronting the Iranian-allied Houthi militias in Yemen that have fired more than 200 ballistic missiles and dozens of unmanned kamikaze drones against the Kingdom in the past seven years. Saudi oil fields even came under attack in 2019 by drones and cruise missiles largely believed to have come from Iran’s direction.

Several US Democratic lawmakers have criticized the Saudi war in Yemen, in which critics have alleged war crimes, and have subsequently blocked several contracts to supply it with precision weapons.

The Biden administration has also imposed conditions on the completion of an agreement to sell the UAE F-35 warplanes and MQ-9B attack drones. The UAE decided to pull out of the deal in protest.

But the Russian offensive against Ukraine and Moscow’s efforts to convince Gulf Arab states to keep oil prices high and not to join Western sanctions against it have created a new political reality that is pressing the Biden administration to reconsider its policies towards the region.

Moreover, the stalling of the talks with Iran to revive the nuclear deal and Tehran’s acceleration of the uranium enrichment in large quantities have placed Washington under pressure to come up with an effective alternative policy that would reduce the anxieties of its Middle East allies and assure them of US military support.

“There are many vital interests for the US in the Middle East, such as the security of Israel, and the uninterrupted flow of oil to international markets with reasonable rates to ensure global economic stability,” said Albadr Al Shateri, a professor at the UAE National Defense University.

“These vital interests will prevent the US from abandoning its role as the hegemon military power in the Middle East,” Al Shateri said.