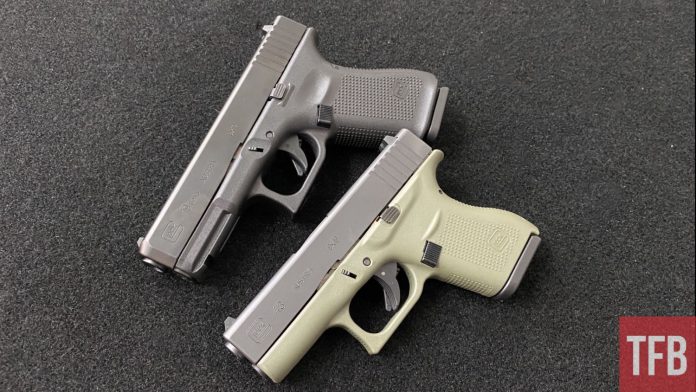 Every week I sit down and look at the number of topics I have written down for the Concealed Carry Corner articles. One thing that blows me away is seeing the vast differences between people willing to upgrade every aspect of their carry pistol on one end, and on the other people not spending money and continuing to use the same gear they have for years. These are two very different ways to look at carrying a concealed firearm but each attitude has its merits. Whatever side you agree with, it’s always interesting to look at what is considered good enough gear.

The gun industry is kind of like the sun rotating the earth, movement is constant and things are always happening. New products are coming out week after week and month after month. Whether it’s a new handgun, holster, accessory or gear, there’s always something new and exciting coming out from a company in the gun industry. Here at TFB, we write articles daily about new products so I completely understand how it can be easy to get sucked into buying new products. At the end of the day, companies make their money by coming up with new firearms and gear for consumers to buy. So what’s my point? The big takeaway is the fact there are always products to spend your money on, but is it always necessary? That’s the million-dollar question and the answer is different for everyone depending on your income and how much you’re into shooting. The general trend in today’s industry is always having the latest and greatest when it comes to guns and gear. With the addition of social media and reviewers always showing the newest products on the market, it’s easy to fall into the trap of buying new gear even though you may not need it. Do What’s Best For You

It’s easy to be sucked into marketing campaigns and buzz about new firearms. I get questions all the time about whether or not it’s a good idea to upgrade to the new pistol that was just released. At the end of the day, it’s important to step back and evaluate what you have for carrying concealed and if it’s effective in your daily life. For 90% of people, the current setup with a slightly older model carry gun will be just as effective as one of the newer variants released on a yearly basis. Certain things like capacity and modularity are important to look at but as a general rule, most are protected just as well with their current setup. My HK USP Compact may be old but it’s still a gun I can shoot really accurately and carry easily.

Throughout my Concealed Carry Corner articles, I cant tell you how many times people have made this argument in the comments section. And as a whole, they’re actually correct. This was never more true than when the Glock 43X dropped onto the market. Everyone I knew rushed out and sold their Glock 43 in hopes of getting the newer 43X with its higher capacity. It was a great time for people to pick up a regular Glock 43 and aftermarket parts for the Glock 43 went on sale almost immediately so those who did not rush into a gun shop actually had a great opportunity to improve their gun for a much less cost. There are a number of people who have carried the same handgun for 20-30 years. Certain people in the gun community like to make fun of the older generations who carry their snub-nose revolvers and smaller framed 1911s, but those guys honestly have a fairly big advantage when it comes to carrying the same handgun. With that much experience using a single handgun, you start to truly develop muscle memory even if you don’t train constantly as others may do. You become incredibly proficient and really understand what the capabilities of a handgun are when you shoot it year after year. Carrying it becomes second nature and things become easier than constantly changing systems like my generation likes to do. It’s not a hard concept, training with the same gear will almost make you more proficient with it, even if it’s not the latest and greatest. I personally still carry my Kahr Arms PM9 on occasion. It may have a double action only trigger and be a handful to fire accurately, but it’s a lightweight and incredibly easy gun to carry. Most wouldn’t want to carry it as their daily carry, but having so much experience with it, I really don’t mind it honestly. When Do You Upgrade?

So the million-dollar question is when to upgrade. I get this question all the time and frankly, it depends on a few different factors. The first and most important factor when looking at new gear is how badly you need a new pistol. So many people simply want a new firearm instead of actually needing one. If you don’t have a carry handgun or don’t have confidence in your handgun then it’s time to upgrade. The second factor to consider is your budget and if you can financially swing a new gun purchase. If it’s not an issue then it’s a simple decision, but if you can’t afford a new gun, a fraction of that money being spent on ammunition and range time will go a long way at making you more accurate and proficient with your current handgun. Younger conceal carriers fall into this trap of constantly buying new gear and not having money to actually train with. Extra cash should always go to training and range time rather than new gear because it will not only improve your shooting skills but will also make you more comfortable with your current carry gun. Don’t get me wrong, it’s a ton of fun picking out new guns and gear to buy with the constant upgrades in the market. Whether it’s accessories or entirely new guns, being able to purchase the latest and greatest can be addictive to some. What I think gets lost on some is the ability to train on a regular basis and being ok with not having the newest shiny thing on the market. It may seem like a departure from the current trend in the gun community, but it’s the best thing for people to do with extra cash.

What do you guys think about constantly upgrading your carry gun? Is it dangerous since people switch them out so often and can’t develop muscle memory or is it more of a fun hobby that people just enjoy? I fell into this trap and working as a reviewer here at TFB has allowed me to continue looking at new guns while having my own personal favorites I can always shoot and carry. Let me know what you personally think down in the comments below. if you have questions about carrying concealed or firearms in general shoot me a message on Instagram @frideopeartor. Stay safe out there!

McManus: America Refuses to Protect its Citizens from Violent Crime