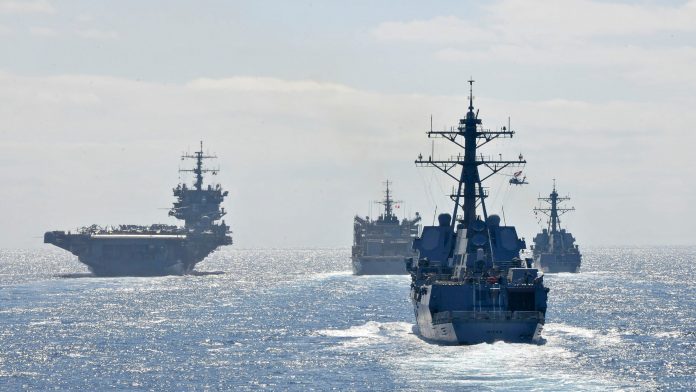 WASHINGTON: The House Armed Services Committee has authorized a $839 billion defense budget for fiscal 2023 after lawmakers approved an amendment that added $37 billion for more ships, aircraft and other equipment.

The bill now heads to the House floor after being passed in a late night session in a nearly unanimous 57-1 vote, with the opposing vote from Rep. Ro Khanna, D-Penn.

It also adds $550 million for security assistance to Ukraine and $7.4 billion to combat the effects of inflation.

“We need only to look toward world events in Ukraine and read reports about China’s plans and actions in the South China Sea or simply read the latest headlines about Iranian nuclear ambitions and North Korean missile tests as well as ongoing terrorist threats to see why this funding is necessary to meet the security challenges of our time,” said Rep. Jared Golden, D-Maine, who sponsored the amendment.

Rep. Elaine Luria, D-VA, who cosponsored the amendment, pointed to statements made by Adm. John Aquilino, who told senators last year that China could use military force against Taiwan within six years.

“It’s a time to grow our military, not shrink our military. I think this $37 billion is a start,” she said.

HASC Chairman Adam Smith, D-Wash., opposed boosting defense funds, stating that the president’s original budget request included sufficient funding to meet threats and that the Defense Department needs to make better use of the money it already gets.

“The department needs greater competition across the defense industrial base, fewer requirements that drive costly inefficiencies, and a disciplined approach to supporting clear strategic priorities for our defense — all of which will be addressed in the FY23 NDAA,” he said in a statement. “The department needs tough decisions and rigorous oversight from Congress. More money isn’t necessarily the answer.”

Khanna, the only lawmaker to oppose the NDAA, told lawmakers that he would be supportive of authorizing the $773 billion defense budget requested by President Joe Biden. However, he contended that any additional funding would be better spent on nondefense technologies and industries.

“Part of me wonders when we’re just going to get the amendment to have a trillion dollar defense budget, because it seems that’s where we’re going,” he said. “Every year we’re basically adding $30 billion more to what the president wants.

Rep. Jackie Speier, D-Calif., also opposed the amendment after objecting to the inclusion of funding to buy back five littoral combat ships. The Navy hopes to decommission nine LCS in FY23 due to reliability concerns, and Speier said it makes “no sense” to continue to spend millions of dollars on vessels with continued reliability problems.

“We all know what lemon cars are. We have a fleet of lemon LCS ships,” she said, showcasing a chart that illustrated each of the nine ships as literal lemons. “We have spent billions of dollars on this fleet when they have no capability to help us deal with what our largest threat is, which is that of China and Russia. The only winners have been the contractors on which the Navy relies for sustaining these ships.”

Even with the boost to the topline, HASC’s version of the defense budget is still dwarfed by the version passed by its Senate counterpart last week. The Senate Armed Services Committee hopes to boost military spending by $45 billion, authorizing a $847 billion defense budget. Luria said the House and Senate will likely approve an NDAA that is “somewhere north” of the $37 billion approved by the HASC.

However, the armed services committees only authorize funding and don’t have the power to obligate dollars to the federal budget. That task is left to the appropriations committees, who have signaled they are less likely to approve a massive boost in spending.

Although Senate appropriators have yet to release their version of the defense spending bill, the House Appropriations Committee approved its version on Wednesday afternoon. Unlike the armed services committees, it stuck closely in line with President Joe Biden’s budget, approving $762 billion for the Defense Department.

US Army Delays Doctrine Release to Incorporate Lessons from Ukraine