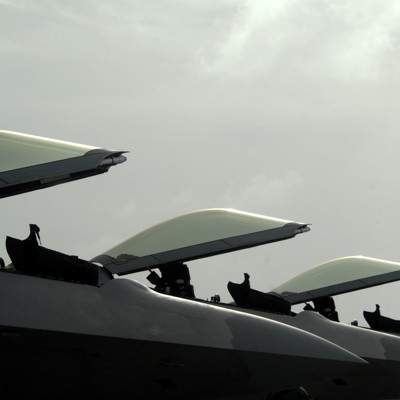 “What we are seeing, from my seat, is the largest military buildup in history since WWII,” Adm. John Aquilino said at a Foundation for Defense of Democracies event Friday.

F-35s have operated from the island’s Austere Airfield since last year, but only on a temporary basis scheduled around key exercises. Aquilino says having fifth-generation aircraft—whether that be F-35s or F-22s—permanently stationed in the theater is “critically important to the ability to deliver deterrence.”

The U.S. military presence on the Pacific island is already “extremely important,” the admiral said.

“Guam is absolutely a strategic location. We will need to operate from Guam, we will need to both fight for and from Guam, and it will provide a variety of capabilities and support functions should we end up in some crisis situation,” Aquilino said.

One thing the island currently lacks is enough missile defenses, he said, reiterating a long-time INDOPACOM concern. Comprehensive missile defense for Guam has been the command’s top funding priority for nearly four years. In May, the Missile Defense Agency said it hopes to build an integrated missile defense command-and-control center on the island.

“The [Chinese military] rocket forces are clearly developing continuous advanced capabilities and longer range. Guam has a 360-degree threat so our ability to defend it, and to be able to operate from there is absolutely critical,” Aquilino said.

Now, Aquilino says, fifth-generation aircraft will need to be defended too—as well as the infrastructure, service members, and supply chains needed to maintain those capabilities.

“To do this, it will take the entire joint force,” Aquilino said.

The F-35, which can operate as a stealthy attack fighter, reconnaissance aircraft, and even a command-and-control platform for autonomous wingmen, is key to going up against a potential adversary like China, he said.

“We are continuing to work on ways to ensure that our [communications and command and control] is resilient. We expect to be attacked in that domain and we have to put in place the structure and the formations that allow us to command and control no matter where we are, whether it’s inside the first island chain, outside the first island chain, all the way back to headquarters. So this view of being able to deliver a picture across a node of nodes is the approach we’re taking and I’m confident we can do,” he said.

Aquilino discussed how the Pacific Air Forces are experimenting with a new approach to operations called Agile Combat Employment or ACE, which is meant to allow rapid shifts from base to base as a battle develops.

“The concept makes the force more survivable. You combine that with some offenses and now we have an airborne capability that can deliver dilemmas from anywhere,” he said.

​​”So the key is to take tremendous effort and the budget and then move forward to deliver that capability against all those threats,” he said.

“…resistance to the commands of the civil magistrate…”