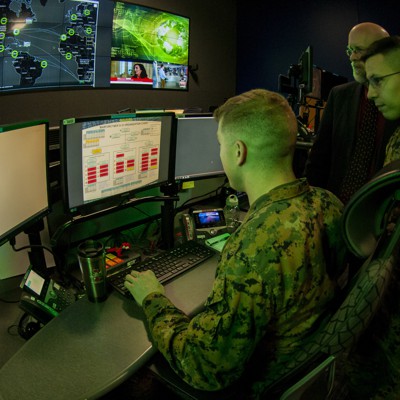 When I get story pitches, I often tell the person to tell me something they’re doing differently from their competitors, or from the way something has always been done. More often than not, I’ll end up writing about it.

Which leads me to our top item this week, about the Common Mission Project—one of the groups behind the popular Hacking for Defense college program that helped launch several national security startups. Hacking for Defense is expanding to the United Kingdom and Australia, as the United States, United Kingdom and Australia deepen their security ties following the 2021 AUKUS pact that is supposed to lead to Australia acquiring nuclear submarines.

Now in its sixth year, Hacking for Defense courses—which are jointly run by the aforementioned Common Mission Project, and National Security Innovation Network and Defense Department—are taught at five-dozen universities around the United States. The course presents students with real-life problems troops are experiencing on the battlefield.

“What’s happening is we’re applying an entrepreneurial problem-solving method that the government doesn’t usually use, and it’s forming interesting companies and creating new talent to solve these problems into the future,” said Alex Gallo, executive director of the Common Mission Project.

The Pentagon funds Hacking for Defense, but defense firms also pitch in cash in an effort to recruit future employees.

Since its creation, Hacking for Defense has worked on more than 1,500 problems at 60 universities, Gallo said. More than four-dozen of college teams have ended up launching successful startups, including Capella Space and Lumineye.

The courses train the students to think differently about weapons buying than the Pentagon. The student teams conduct dozens of interviews with the troops who need new tech.

“We’re developing new workforce talent who think in this way and want to go into defense and national security,” Gallo said. “This might be the future workforce to do those things and buy new capabilities that the DOD actually needs for the China fight.”

The teams come up with solutions to the battlefield problems much more quickly than the military’s often years-, if not decades-, long requirements and acquisition process.

“It’s a way for warfighters to surface their pain points that wouldn’t usually be surfaced through the normal requirements and acquisition process,” Gallo said.

Right now, some student teams are working on counter-drone problems. Often, the college teams develop technology that is not just beneficial to the DOD, but also to civil and commercial industries, Gallo said.

“This is how requirements should be written. It shouldn’t be written by some bureaucrat at the Pentagon,” Gallo said. “It should be out there actually interviewing end users who would have to carry this solution.”

The House Armed Services Committee added $37 billion in its review of the 2023 National Defense Authorization Act. It comes the week after the Senate Armed Services Committee added $45 billion to the Pentagon’s request. High inflation, supporting Ukraine in its fight against Russia, and countering China were cited as the reasons for the increase. The committee approved the bill by a 57 to 1 vote. Progressive Rep. Ro Khanna, D-Calif., was the lone no-vote, arguing the extra $37 billion is “basically paving the way to a trillion-dollar defense” budget, and that the money would be better spent elsewhere.

But there was broad bipartisan support for the increase.

“Record-high inflation is sapping the Department of Defense’s buying power and adding pressure to industry’s workforce, supply chain, and operations, which remain stressed from the pandemic,” Eric Fanning, CEO of the Aerospace Industries Association, said Thursday. “Swift floor consideration of the defense bills in both the House and Senate is more crucial than ever.”

Among the interesting amendments included in the legislation: One from Rep. Scott DesJarlais, R-Tenn., that calls for the undersecretary of defense for research and engineering “to engage with industry to initiate the requirements development process for a large scale, runway launched, aircraft capable of Mach five or greater airspeed flight, with an objective of entering prototyping competition for aircraft of this nature by 2024. The committee encourages utilization of discretionary funds in fiscal year 2023.”

As for the war in Ukraine, two Ukrainian air force pilots were on Capitol Hill this week. The pilots were in Washington amid a push by Reps. Adam Kinzinger, R-Ill., and Chrissy Houlahan, D-Pa., to begin training Ukrainian pilots to fly American-made jets. Ukrainian pilots say F-16s and more modern air defenses would help in their fight against Russia.

Meanwhile, Russia’s invasion of Ukraine is prompting Denmark to keep its F-16s flying until 2027, three years longer than planned, while it phases in newer F-35 stealth fighters.

As European nations increase security spending in response to Russia’s invasion of Ukraine, German arms maker Rheinmetall has unveiled a new battle tank called the Panther KF51. The tank was revealed at the Eurosatory arms show in Paris last week. Its unveiling “suggests that reports of the death of the tank are ‘greatly exaggerated,’” Capital Alpha Partners analyst Byron Callan wrote in a June 17 note to investors. “The Panther could take head-on the Franco-German program to develop a new main battle tank called Main Ground Combat System to replace LeClerc and Leopard 2 tanks, but that program won’t field a tank until 2035-2040. Panther shows what happens when development programs move at a crawl.”

The Atlantic Council think tank has announced a new “Commission on Improving DOD Engagement with New Companies and Innovators.” The commission is chaired by former Defense Secretary Mark Esper and former Air Force Secretary Deborah Lee James. More about the other commissioners here.

Former New York City mayor Mike Bloomberg was sworn in this week as the chairman of the Defense Innovation Board.

MxD named Berardino Baratta its new CEO. Baratta is currently vice president of projects and engineering at MxD and will become CEO on July 1. He replaces Chandra Brown, who is retiring and will serve as a part-time adviser to the organization through the end of 2022.

The deal would beef up the air-defense offerings of the U.S. arm of the Italian company, and into the top 50 largest defense firms.

Moscow is blockading exports, bombing silos, and telling the world that high prices are the West’s fault.

Off-the-shelf spacecraft and lunar-mission gear are also on the table for Space Force’s acquisition command.

It gives Biden the chance to offer a clear narrative: accelerating the move to clean energy is crucial to keeping America safe.

They’ve shot down a few Russian cruise missiles—but they could do far more with modern gear.

An interconnected era requires looking at security through economic, technological, and logistics lenses.

What Are The Top Sounds That Spook Deer? – Bowhunting.Net