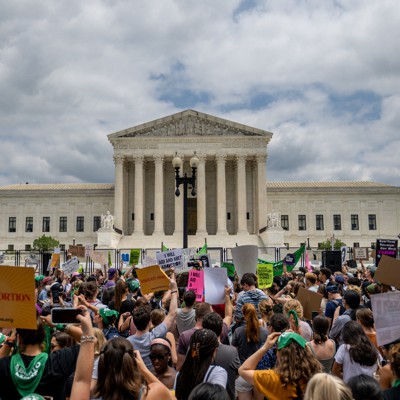 One Army veteran running for Congress says the freedoms she fought for in Iraq are being “ripped away” by the Supreme Court’s decision on Friday to overturn Roe v. Wade.

Ashley Ehasz, a West Point grad and former Apache helicopter pilot who is seeking to unseat Republican Rep. Brian Fitzpatrick in Pennsylvania, said the decision is “a matter of national security” because of the impact it will have on the more than two million women serving in uniform.

“Let’s be clear: women who are active-duty service members do not get to choose what state they live in, which means they could lose abortion access at the whim of any state with an abortion ban,” the West Point graduate said in a statement. “Now that women in uniform have lost their reproductive rights, our country’s fighting force is hindered and our security is at risk.”

The Court declared that abortion is no longer a constitutional right, nearly 50 years after Roe v. Wade protected women’s access to the procedure. Many members of the military and their families live in the dozens of states where abortion is now illegal or is shortly expected to be outlawed.

Because of existing laws that took effect upon the decision, Texas’ attorney general said Friday, abortion is now illegal in the state, which is home to Fort Hood and several other of the military’s largest bases. Missouri, which includes Fort Leonard Wood, also had a trigger law that banned abortion as soon as the Supreme Court ruled. Other states expected to ban abortion within a month include Oklahoma, Mississippi, and Arkansas.

President Joe Biden promised Friday to limit the effect of the decision, including by protecting women’s rights to cross state lines to access abortions and people’s ability to receive abortion pills through the mail. He did not specifically address the rights of troops.

“This decision must not be the final world. My administration will use all of its appropriate lawful powers. Congress must act. With your vote, you can act,” Biden said from the White House. “This is not over.”

“I am committed to taking care of our people and ensuring the readiness and resilience of our force. The department is examining this decision closely and evaluating our policies to ensure we continue to provide seamless access to reproductive health care as permitted by federal law,” Austin said.

Some U.S. lawmakers are already taking steps to try to protect troops’ access to reproductive healthcare, but a closely divided Congress means it’s an uphill battle. On Wednesday, the House Defense Appropriations Subcommittee approved an amendment to the 2023 defense authorization bill that would require commanders to approve leave for troops who are either seeking an abortion themselves or helping someone else get one, Politico reported. But the win for Democrats is likely just the first of many battles as the bill winds its way through Congress to become law.

Earlier this month, more than 80 Democratic lawmakers introduced a stand-alone proposal that would allow military medical facilities to perform and pay for abortions for service members and dependents. Introduced on June 3, the Military Access to Reproductive Care and Health, or MARCH, for Military Servicemembers Act would ensure that abortion remains available to women stationed in the more than two dozen states expected to ban the procedure, now that the Supreme Court has swept away Americans’ right to it.

Liberal veterans groups called on Congress and the president to act quickly to protect the rights of troops now that the Supreme Court has released its decision.

“The Dobbs decision is an utter disaster for women in the military,” VoteVets wrote in a thread on Twitter. “There may be work-around on the federal level that can lessen the impact of this decision, and it is of the utmost importance that the Biden administration and Congress figure those out – NOW.”

Several Democratic members of the House Armed Services Committee declared their objections to the ruling.

“This decision takes control of women’s bodies away from them and gives it to politicians,” wrote Rep. Seth Moulton, D-Mass., a Marine Corps veteran and co-sponsor of the MARCH Act. “It is terribly wrong.”

“This decision is further proof that we need to enshrine reproductive freedom protections into federal law,” wrote Rep. Elaine Luria, D-Va., another member of the committee. “I will continue to be an advocate in Congress for women and fight to protect the rights of all Americans, including the right to choose.”

Women in the military seeking an abortion already face more restrictions than their civilian counterparts. Abortions cannot be performed at military medical facilities and the cost of the procedures in private facilities aren’t covered by troops’ Tricare health insurance becasue of the Hyde Amendment of 1976, which prohibits the use of federal dollars for abortion unless the life of the mother is at risk, Sean Timmons, the managing partner of law firm Tully Rinckey’s Houston office, said earlier this year.

The repeal of Roe v. Wade is likely to make it more difficult for women in the military to find access to the procedure safely and legally, Timmons said.

If each state has the freedom to ban or allow abortions, the reproductive rights of women in the military would depend on where the Defense Department stations them, a decision in which they have little say, Rachel VanLandingham, a former Air Force judge advocate who is now a professor at Southwestern Law School, said earlier this year. If a woman from California, where abortion is expected to remain legal, joins the military and is stationed in Georgia, her access to reproductive healthcare will be limited by her decision to join the military.

How Can You Show Respect For Non-Hunters

First Look at the YETI Yonder