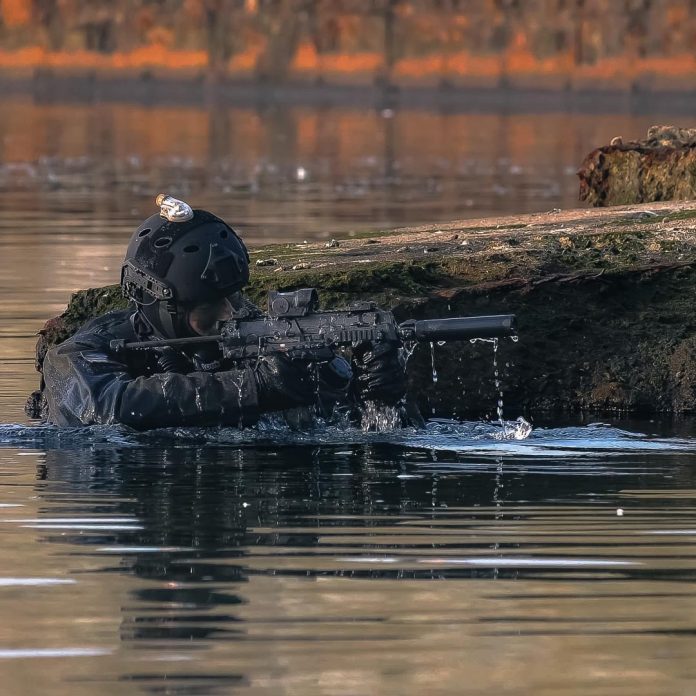 Posted 6 hours ago in MIL/LE, Photo Of The Day with No Comments
Tags: Heckler & Koch MP7, Kampfschwimmer, special forces

Posts from the German Heckler & Koch Facebook account are always an excellent excuse to enhance the German I learnt in school. I mean “Kampfschwimmer im Einsatz” sounds terrific, doesn’t it? It translates roughly as “combat diver in action”. The clearly visible lamp on top of the helmet is an IR illuminator, which can emit visible and non-visible (to the human eye) light or flash to friendlies around and in the sky.

The MP7 represents a new generation of enhanced-performance submachine guns that bridge the gap between assault rifles and conventional submachine guns. Developed as a genuine personal defense weapon, it far exceeds the NATO requirements profile.

The MP7 is extremely compact, lightweight, can be used in very confined spaces, and is practically recoil-free. It can be carried continuously, making it the ideal personal weapon for the soldier of today. Those who carry it will be suitably armed for the broadest range of operations.

Comparing the calibres, the penetration and terminal effects of the 4.6 mm x 30 cartridge are several times those of the standardised 9 mm x 19 cartridge.

In a Connected Era, We Talk Too Much About Individual Weapons