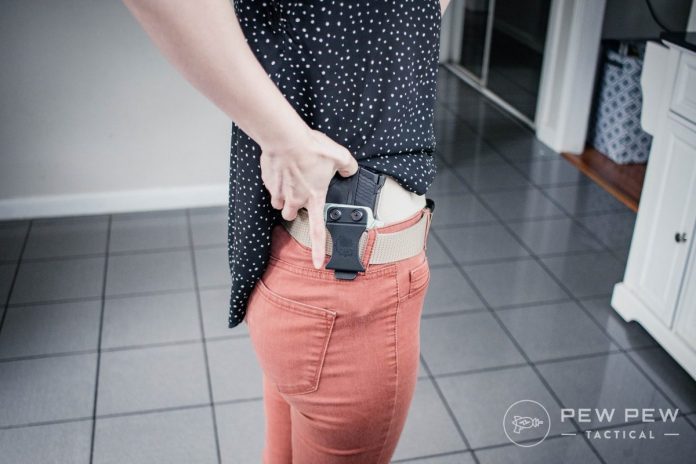 The Supreme Court made a landmark decision regarding a case involving the New York Rifle & Pistol Association — marking the latest step in support of the Second Amendment.

For those of you who haven’t come across the ruling yet (or maybe don’t wade through the legalese), it basically says that a person applying for a concealed carry permit does not have to demonstrate some special need to be issued a permit.

With that out of the way, we can take a look at how we got to this point and some other important details about the ruling.

Disclaimer: While the information provided here is legal in nature, it is not to be construed as legal advice and is for educational and entertainment purposes only.

NYSRPA v. Bruen: Where It Began

Just as important as the ruling is how we got to it.

With every Supreme Court decision, the case had to make its way through the lower courts first — from state courts to the Court of Appeals and, if they felt like taking the case, the U.S. Supreme Court.

In New York, a handgun license may be granted as an unrestricted license or as a restricted one.

An unrestricted license allows you to carry a handgun for whatever purpose and in most places — except for courthouses, schools, etc.

The restricted licenses are the ones typically issued and most commonly only allow for transporting handguns outside the home for the purposes of hunting and target shooting.

To be granted an unrestricted license to concealed carry in public, New York requires applicants to show “proper cause” — some special need — to convince the State the applicant is worthy of carrying concealed.

Nash had originally received a license limited to hunting and target shooting but requested to be granted an unrestricted license to carry his firearm in public for self-defense after a string of robberies occurred in his neighborhood.

Unfortunately, his reason for self-defense was not considered a special need.

Koch went through a similar situation. He was granted a restricted license for hunting and target shooting but later managed to change his license to allow him to carry his handgun to and from work.

However, Koch still wasn’t given an unrestricted license to carry concealed in public.

The NYSRPA, a Second Amendment advocacy group for New York gun owners, brought a lawsuit on behalf of Koch and Nash against the New York State Police, the agency responsible for issuing the licenses.

While the case was originally filed against George Beach, then Superintendent of New York State Police, and was called NYSRPA v. Beach. But after Kevin Bruen became the new Superintendent in 2021, the case name was changed to NYSRPA v. Bruen.

So, what exactly is in the court decision?

If you’ve got some time to kill, it’s worth looking at the actual opinion, as there are some great nuggets by Justice Clarence Thomas.

However, reading Supreme Court decisions isn’t all that exciting for most people, even if it’s about the Second Amendment.

Fortunately, we’ve read the decision and have broken it down into bite-sized morsels you’ll actually be able to understand.

Justice Thomas wrote in the ruling that, “New York’s proper-cause requirement violates the Fourteenth Amendment by preventing law-abiding citizens with ordinary self-defense needs from exercising their Second Amendment rights to keep and bear arms in public for self-defense.”

Breaking that down a little bit, New York’s proper-cause requirement is essentially a requirement that an applicant has to show some type of special need to be issued an unrestricted handgun license.

Add to that the Second Amendment, which reads, “A well-regulated Militia, being necessary to the security of a free state, the right of the people to keep and bear arms shall not be infringed.”

Finally, we bring in the Fourteenth Amendment. That comes into play because the Second Amendment, like all the Amendments in the Bill of Rights, only restricts what the federal government can do.

The Fourteenth Amendment has what is known as the “due process clause,” which incorporates most (but not all) of the Bill of Rights to the state level as well.

Put all of that together, and we have a ruling that says N.Y. cannot require applicants to show a special need to be granted an unrestricted license to carry concealed in public because that would violate the Second Amendment, which has been determined to apply to state governments.

While that ruling made headlines, one other part of the decision is even more important.

To appreciate it, we need to examine the previous Second Amendment cases that led to NYSRPA.

In 2008, the Supreme Court gave us DC v. Heller and followed it up two years later with McDonald v. Chicago in 2010. The two cases, combined, resulted in the Second Amendment being recognized at the state level…courtesy of the due process clause of the Fourteenth Amendment.

Following the decisions in Heller and McDonald, other courts, such as the Courts of Appeals, came up with a test in dealing with Second Amendment cases.

That test featured two steps. To justify a regulation of a Second Amendment right, the government:

With the Supreme Court’s ruling in NYSRPA, the Court decided that the two-step test had one step too many.

To regulate the Second Amendment, the government (state or federal) must show the regulation is consistent with historical regulations.

What Does NYSRPA v. Bruen Mean for Gun Owners?

When looking at this case in the context of the entire U.S., this ruling doesn’t have that much of an impact on concealed carry.

Forty-three states in the U.S. are already “shall-issue” states — meaning as long as you go through all the steps in the application process, you’ll be issued a concealed carry permit.

Those steps usually just involve taking a firearms safety or proficiency course and going through a background check.

Worth noting that 25 of those states recognize “constitutional carry,” so they don’t require a permit for someone to carry concealed.

So what locations are impacted by the specific ruling?

New York, Washing D.C., California, Hawaii, Maryland, Massachusetts, and New Jersey used a “may-issue” system before the ruling. Again, this required some special need or reason the applicant should be issued a CCW permit.

With this ruling, all 50 states and D.C. are now effectively “shall-issue.” So, gun owners in those last remaining holdouts will now be able to apply for a permit without needing a specific reason.

More importantly, all the firearms laws on the books are now subject to the new test spelled out by the Court.

Laws on magazine capacity restrictions, the types of firearms available for purchase, and even red flag laws must be shown to be consistent with historical traditions of firearm regulation or be struck down as unconstitutional.

Of course, as NYSRPA took over five years to resolve, many of the laws that may eventually be ruled unconstitutional will likely still be in effect for a while.

TL;DR version: NYSRPA v. Bruen ruled that states like New York cannot require citizens to demonstrate special cause to apply for and be issued a concealed carry permit.

Will some states try to institute workarounds or loopholes to circumvent the ruling? Possibly. New York officials have already indicated they intend to fight the ruling and/or work to preserve the current laws.

As always, we here at Pew Pew Tactical will keep you up to date with all the news you need to stay current. So, keep checking back!

What do you think of the ruling? Sound off in the comments below! For more on legislation, check out our Laws Category.