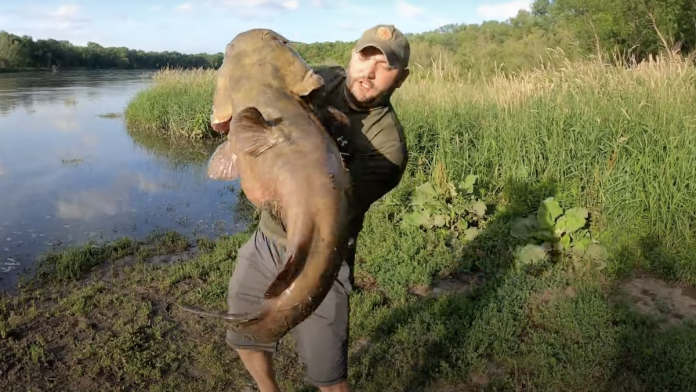 A 71.6-pound flathead catfish caught in Iowa during Father’s Day weekend won’t break the long-standing state record for the species, but it did set a new personal best for angler Greg Sieck, who boated the monster fish near Des Moines using a trotline method known as bank-poling. Sieck recorded the catch-and-release outing and posted it to his YouTube channel Outdoor X Media.

The video shows Sieck and a friend setting up bank poles baited with bullheads on Friday, June 17, then returning on Saturday morning to check their lines. Even before he sees the fish, Sieck knows he has a whopper on. “Dude, get ready,” he says to his fishing partner. “This could be 70 pounds! Are you ready?”

After hauling the big flathead into the boat, Sieck says, “Holy crap! Look at this thing! That is a big fish. That is a really, really big fish.”

Bank-poling is similar to limb-lining, but it allows anglers more flexibility in placing their baits because lines are attached to long flexible fiberglass poles that can be located anywhere a pole can be driven into the mud. Anglers like to set up on banks or shallow flats near a steep dropoff, where big cats cruise when on the hunt. One spot Sieck targeted features a 12-foot dropoff just a foot from the bank.

After weighing the fish and taking photos, Sieck released the big catfish, which he estimated to be more than 60 years old. “Seventy-one pounds of pure, giant fish,” he says, grimacing as he strains to lift the behemoth. “Look at that thing! We’re going to let it go.”

Read Next: The Best Hooks for Catfish

“You can get bigger,” he adds as the fish swims away. “It’s the biggest catfish we’ve ever caught.” Sieck says the catch will probably be the highlight of his year—and perhaps his entire fishing career.

The Hawkeye State record is an 81-pound flathead caught and released in 1958 by Joe Baze. According to the Iowa Department of Natural Resources, that fish came out of Ellis Lake in Lucas County. Sieck isn’t saying exactly where his came from. He identified the location in his video, but later bleeped it out. To a commenter on his YouTube video who asked what river he was fishing, Sieck replied, “A deep one.”