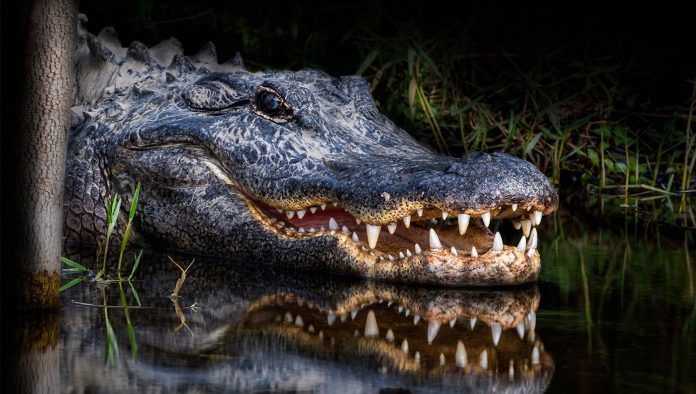 An 11-foot alligator dragged a man to his death on Friday morning at a retention pond between the Myrtle Beach Golf and Yacht Club and an adjacent condominium neighborhood in Horry County, South Carolina. The Horry County Police Department responded at 11:45am and recovered the victim, who has yet to be identified, from the pond.

Horry County Police spokeswoman Mikayla Moskov told MYHorryNews, “Upon arrival, units determined that an alligator had taken hold of a neighbor and retreated into a nearby retention pond.” She also confirmed that a South Carolina Department of Natural Resources-contracted alligator removal service captured and euthanized the attacking alligator after an investigation by a SCDNR biologist.

A commenter on the HCPD Facebook page reported that the man was cutting grass around the pond at the time of the incident. Jason Repak, a neighbor, had recently photographed three large alligators near the pond, one of which he fears was the attacking gator. Repak told MyHorryNews, “They are 12 to 14-foot alligators. They are big. We’ve never gone anywhere close to them. When we walk the dogs near that pond, …we don’t walk them on that bank because you just don’t know where they’re lurking.”

Repak lamented the tragic death of his neighbor. “It’s absolutely horrible,” he said. “As far as I know, most neighbors have always treated the alligators with a healthy respect and almost like part of the community. This is just a tragedy that nobody would have expected.”

WPDE ABC 15 reported live on Facebook that the Horry County Fire and Rescue said that, following the incident, there was no threat to the public and that neighbors can resume their normal activities. Moskov reported that the HCPD’s Environmental Services and Criminal Investigations divisions are investigating the death. Horry County Chief Deputy Coroner Tamara Willard said the coroner’s office would release more information about the case on Monday.

South Carolina is home to an estimated 100,000 alligators. The University of Georgia’s Savannah River Ecology Laboratory states on their website that “You are more likely to get struck by lightning or win the lottery than you are to be seriously injured by an alligator. In South Carolina, only 13 alligator bites have been recorded since 1948, two of which resulted in fatalities.” They will now have to update that to three. The site goes on to offer a set of guidelines for living safely with alligators. Among the suggestions: Do not feed the animals. Do not approach them to take photos. Do not walk dogs near water.

Echoing that last bit of advice, Repak told MyHorryNews, ‘My prayers and heart go out to the family, as my arms wrap tighter around my kids and dogs near these ponds.’

NATO Needs to Move Protection of Civilians to Center Stage

On this day in 1605, King James learned about the Gunpowder Plot. Hence there is Guy Fawkes Day.

“…let him hear what the Spirit saith unto the churches.”