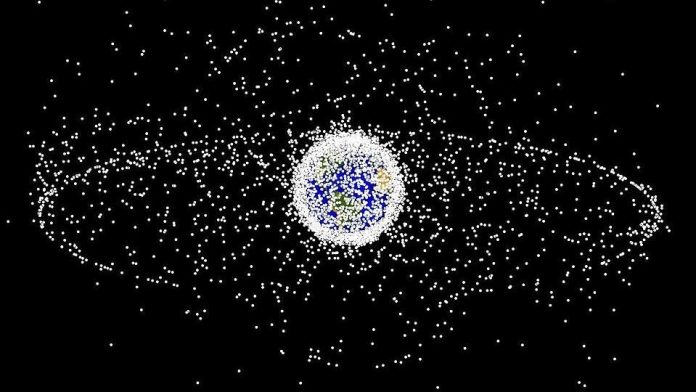 The orbital population of active satellites and dangerous debris continues to grow by leaps and bounds. (NASA illustration)

WASHINGTON: A top-level agreement on how to begin the handover of responsibility for monitoring the heavens from Space Command to the Commerce Department (DoC) is expected to be finalized by the end of August, according to government officials.

That agreement — to be signed by Gen. James Dickinson, SPACECOM commander; Gen. Jay Raymond, chief of the Space Force; and Richard Spinrad, Commerce undersecretary for Oceans and Atmosphere — is designed as a framework and thus will be light on details, sources close to the process told Breaking Defense.

Nonetheless, it is important as a necessary first step in formalizing the long-planned shift.

Richard DalBello, the new head of the Office of Space Commerce, said June 22 that his team’s “biggest challenge is to get the tools in place to do the transition that we’ve been instructed to do for the responsibilities that are currently held by the Space Force.

“The first step in that journey is a memorandum of agreement between the Commerce Department and the Defense Department. And we’re well on the way on that and I hope to have that wrapped up this summer,” he told the Secure World Foundation’s annual Space Sustainability Summit.

“It’s the first key piece — the first key tiles sliding into place for the Stargate” between DoD and Commerce, another official involved echoed, referencing the fictional wormholes featured in the 1997-2007 sci-fi television series “Stargate SG-1”.

The idea, the second official explained, is that the MoA will be followed by a set of annexes that include how the Defense Department will share funds, personnel and/or technology to help the Office of Space Commerce stand up a civil structure for space situational awareness (SSA). Those annexes would be hashed out over the time as the Office of Space Commerce’s plans are fleshed out.

The Trump Administration’s 2018 Space Policy Directive-3 (SPD-3) ordered the transfer of space object tracking and collision warning authority for civil and commercial space to Commerce in order to free the military to focus on growing threats, especially from Russia and China, to US space assets. The Commerce Department subsequently tapped its Office of Space Commerce, which sits under the National Oceanic and Atmospheric Administration, to do the job —with the intent of elevating that office to its own bureau to enable creation of a civil regime for space traffic management (STM) to ensure safe operations.

DoD, for its part, has been itching to ditch the mission since almost when it was first charged with it in 2009.

But due to both bureaucratic infighting at Commerce and congressional anathema towards the prospect of new STM regulation, movement since SPD-3 has been painfully slow — drawing widespread criticism as space operators face ever-increasing orbital congestion due to booming growth in the population of active satellites and space junk.

DalBello said that he has been on a “listening tour” to find out what industry would like to get out of a civil service designed to provide a ‘basic service” providing civil, commercial and foreign operators with warnings of potential collisions. The key is defining what exactly that involves, he explained, and in particular how Commerce can go beyond what SSA data SPACECOM provides today, which industry across the board agrees isn’t enough to help them manage risks on a day-to-day basis.

It also goes beyond developing a computer system for the Office of Space Commerce to begin using in 2024, known as the Open Architecture Data Repository (OADR), to manage space tracking data and crunch the numbers about close approaches and potential collisions, DalBello stressed.

“Everyone always wants to talk about the the actual tools and technologies for SSA. And I always say: ‘you know, that’s like talking about the airplane — and that’s important; I do need an airplane — but really what I need to be talking about is the global air transportation system,” he said.

“We need standards clarity on how we ingest data, what kinds of data we ingest, the quality of data, how we validate data,” he added. “On the other side, we need rules of the road — where there are developed, generally understood principles by all space operators for how one handles various evolving situations in space.”

Finally, DalBello stressed, industry too will need to be willing to accept some accountability, and be willing to pay the price, to ensure their actions don’t put others at risk.