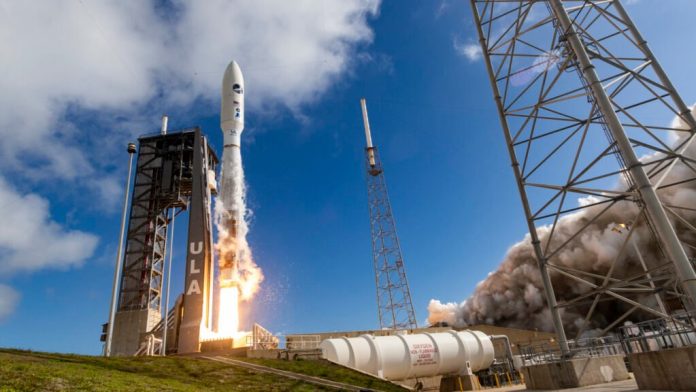 An Atlas V carrying the USSF-7 mission under the National Security Space Launch program lifts off, May 17, 2020. (Photo courtesy of United Launch Alliance)

WASHINGTON: As the Space Force begins planning for the next round of contracting for national security launch services beyond 2027, action on Capitol Hill is heating up — with industry lobbying emerging into the public eye.

At stake: billions of dollars and years of guaranteed business for winning launch providers under the service’s National Security Space Launch (NSSL) program when the current “Phase 2” is wrapped up in 2025. Space Force intends to open bidding for “Phase 3” in fiscal 2024.

While everyone involved is preaching the need for “competition” to save money, it is clear that lawmakers have very different ideas about what that means, depending on their constituencies.

Some 25 House members have signed onto a draft letter being circulated by Rep. Doug Lamborn, R-Colo., pushing restrictions on the contenders. That letter was drafted by current incumbent, United Launch Alliance, according to industry sources; ULA is a joint venture of defense behemoths Boeing and Lockheed Martin.

The undated draft, addressed to Air Force Secretary Frank Kendall and obtained by Breaking Defense, encourages the Space Force to “continue requiring launch providers meet all critical mission requirements.” This would effectively limit the contest to those companies with large, “high energy” rockets that can loft satellites all the way up to Geosynchronous Orbit (GEO, some 36,000 kilometers in altitude) and block out small launch providers who can only reach Low Earth Orbit (LEO, between 100 and 2,000 kilometers) even for missions that only need to reach that lower zone, according to several industry sources.

Asked for comment, a spokesperson for ULA, headquartered in Centennial, Colo., did not refute that the company had drafted the letter but deferred comment to congressional offices involved. Lamborn’s office didn’t respond to a request for comment.

Countering that effort is language that survived the grueling marathon of the House Armed Services Committee (HASC) fiscal 2023 National Defense Authorization Act (NDAA) debate on June 23. Under that “sense of the Congress” provision, the HASC urges Kendall, who oversees Space Force acquisition, to consider throwing open the doors to a wider pool of commercial launch providers for Phase 3. It also presses consideration of alternate acquisition models, such as indefinite delivery/indefinite quantity contracts or block buys.

HASC Chair Adam Smith, D-Wash., has long sought to pry open the NSSL contract, in part championing his home state firm Blue Origin. The company lost out during the Phase 2 round of contracting and has been planning to pitch its heavy lifter, called New Glenn, in Phase 3.

While not about the launch-provider fight, the HASC NDAA language itself also contains mixed messages about another part of what the service calls the “launch enterprise,” asking the Space Force to strongly consider using only once launch integrator for all satellites and payloads going up on NSSL launches —  arguing this could save money. (The current primary launch integrator for small satellites is the sprawling Parsons Corporation, which in won an undisclosed amount to provide that service for five years.)

Meanwhile, the Space Force is trying to convince the Pentagon to allow it maximum flexibility in future launch services and integration contracting, to be able to provide tailored launch options for the myriad new types of missions it envisions for the future — such as patrolling the vast volumes of space in the cislunar region between the Earth’s outer orbit and the Moon, and the use of smaller satellites in Low and Medium Earth Orbits (LEO/MEO).

ULA and SpaceX in 2020 were each awarded Phase 2 NSSL contracts, with ULA nabbing 60% and SpaceX 40% of military and Intelligence Community launch missions for the five-year duration. While the contracts run through 2025, actual launches are budgeted two years in advance — so the last launches under the Phase 2 contract will take place in 2027.

The service in November 2020 issued a Request For Information (RFI) from launch providers in order to get a lay of the land regarding what commercial capabilities would become available by the end of the decade. And now, Space Systems Command (SSC) in the midst of a review of alternate acquisition strategies for Phase 3 expected to be completed this summer, a senior Space Force official told Breaking Defense.

“We are actually looking at a variety of options for Phase 3 and opened the aperture quite a bit; talking to all the providers multiple times in the past few months,” the official said, noting that there are “quite a few options” on the table.

“Key for us is allowing on-ramps, allowing for some smaller launches to have a chance,” the official added, in order to avoid billion-dollar “Titan-era prices,” a reference to a ULA’s older, pricier launch vehicle.

The Space Development Agency (SDA), which already has begun launching small satellites to LEO for its high-speed communications Transport Layer constellation and missile warning/tracking birds for its Tracking Layer, has seen what a difference flexibility in obtaining launch services can make.

In December 2020, SDA awarded SpaceX a $150 million contract for two launches to orbit its first 28 pre-operational “Tranche 0” Transport and Tracking Layer satellites; the first launch under that agreement is scheduled for September.

But language in last year’s NDAA instructed the Defense Department and Intelligence Community to contract all launches through NSSL rather than direct commercial buys. While there is a provision for a waiver in the bill, it requires Defense Secretary Lloyd Austin and Director of National Intelligence Avril Haines to sign off based on national security considerations, and thus DoD leadership has been reluctant to deploy it.

SDA, in its fiscal 2022 budget, included the first of the 10 launches needed to put its Tranche 1 constellation of 150 satellites on orbit starting in 2024. That one launch alone under NSSL will cost the agency $116 million, and actually required some internal budgetary machinations to fund, including a shift in some $10 million from the Space Force’s budget to SDA’s pot.

The agency, which will transition from DoD’s Research &Engineering office to the Space Force this October, has three Tranche 1 launches planned via NSSL in its fiscal 2023 budget, to the tune of $314 million. All totaled, it currently plans to spend $1.4 billion between 2023 and 2027 (i.e., the duration of the Pentagon’s Future Year Defense Program, or FYDP, budgeting process) on launch procurement — including $473 million in FY26-27 for six launches after the end the NSSL Phase 2 contracts.

“The Space Development Agency is working closely with the U.S. Space Force, DOD Comptroller, Congress and others to ensure adequate funding for the agency’s ambitious launch schedule for Tranche 1,” SDA spokesperson Jenn Elzea said in an email response to a request for comment. “SDA appreciates the collaborative spirit across the Department and Congress that continues to enable our efforts to deliver.”

Separately, the Space Force has some $10 billion slated for 35 planned launches over the FYDP; with about $2.8 billion for 15 that would fall into NSSL Phase 3 in FY26-27.

The Best Rifles for Hog Hunting

Tell Everyone How to Measure Cyber Risk, DOD Begs NIST