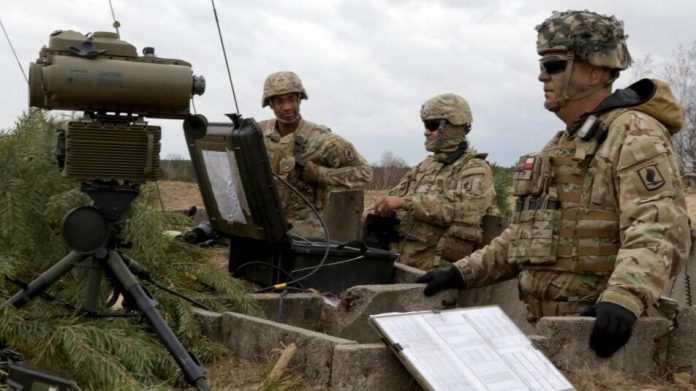 The Army’s TITAN ground station will link ISR sensors based in space, on land and in the air. (Spc. Christina Westover/Army)

WASHINGTON: The US Army has selected Raytheon and Palantir to build dueling prototypes for the Tactical Intelligence Targeting Access Node, a program that’s critical to the military’s ability to rapidly turn battlefield intelligence into targeting information in the future.

The TITAN program is a tactical ground station that will process data from across space and land-based sensors using artificial intelligence and ship it off to the right shooter — such as one of the new Army long-range precision fires missiles.

The Army’s Program Executive Office for Intelligence, Electronic Warfare and Sensors announced today that the companies will each receive $36 million for the second phase of the program, during which each will build competitive prototypes of their designs.

The second phase will last 14 months, after which the Army will select one vendor. According to fiscal 2023 budget documents, vendors will be evaluated against “technical feasibility and ability to meet TITAN requirements” during the prototyping phase. The release said that the winner will deliver all TITAN prototypes and variants, add in new technology, and prepare to transition TITAN to production and ultimately fielding.

The Army requested $58 million in research, development, test and evaluation funds for the TITAN program in its fiscal 2023 budget request. The vendor downselect is scheduled for the fourth quarter of FY23. A fielding contract is not expected until third quarter fiscal 2026.

TITAN is designed to be central to Joint All-Domain Command and Control, the Pentagon’s future warfighting concept connecting sensors with the appropriate shooter. It will integrate information from across the joint force, intelligence community and battlefield intelligence, surveillance and reconnaissance data. TITAN’s suite of capabilities will be integrated on a ground vehicle, such as the Joint Light Tactical Vehicle.

“Now more than ever, the Nation’s warriors and allies are being asked to make more decisions, at a faster speed, with more available data,” said Aki Jain, president of Palantir USG, in a statement. “TITAN is the crucial combination of the Defense Industry’s best technology from both emerging and enduring DOD partners, and we’re proud to serve as a non-traditional prime contractor for this effort.”

Raytheon did not immediately respond to a request for comment.

Palantir and Raytheon both won $8.5 million contracts in January 2021 for the first 12-month phase of the program, which included system design and software development. According to C4ISRNET, the first phase also included four soldier touchpoints, two design reviews and two technical demonstrations. In phase three, the winning company will refine its prototype. The fourth phase will see the vendor integrate different sensors and new technology.

A senior Palantir engineer, speaking on condition of anonymity, said that the company thinks it can capitalize on the Army’s acquisition strategy.

“Having a more modular, flexible approach that’s centered around how the software is going to be delivering the basic weapon capability here — I think it makes it so a company that is primarily a software company is well-suited to actually deliver on that technology promise here,” the engineer said.

The senior engineer said that the company could potentially participate in several Army events over the next 14 months, including Project Convergence, joint warfighting exercises or training center rotations.

The engineer added that based on feedback from paper-based and software exercises, including a virtual reality test with soldiers, Palantir internally funded a prototype design. During a touchpoint at Hunter Army Airfield in Georgia, soldiers provided feedback on different aspects of the design, such as the ability to move through the vehicle with helmets, boots and backpacks, as well as TV screens versus a whiteboard, the engineer said.

“We tried to make this platform as digitally capable as possible,” the engineer said.

Meanwhile, Northrop Grumman is working with the Defense Innovation Unit and the Army’s Tactical Exploitation of National Capabilities office to build prototype TITAN ground stations, focused on space capabilities. The senior Palantir engineer involved with the program said that will be integrated in with the program toward the end of the second phase.

12 Survival Items to Look For at Wholesale Retailers