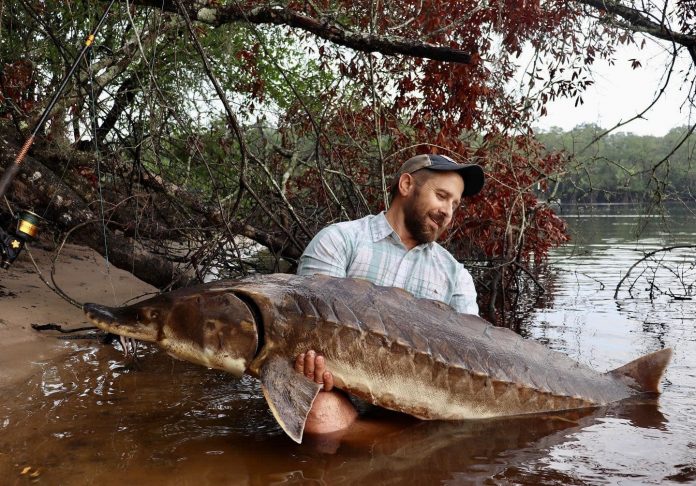 David Graham of Fort Myers, Florida made two incredible catches over the weekend. On Saturday, June 25, he caught not just one but two Gulf sturgeon—a species that few people have ever seen, let alone hooked on a rod and reel.

Graham calls himself a “multi-species enthusiast” and runs a personal blog detailing his unusual catches. He decided to take a last-minute weekend trip to the Suwannee River in northern Florida. He’d heard that the river holds Gulf sturgeon and noticed that the photos he’d seen of the fish breaching the surface were typically taken in late June and early July. Graham made the drive up to the river from his hometown on Friday to camp along the riverbank. He brought a nice camera, hoping to snap some photos of the sturgeon jumping out of the water. He also brought fishing gear, planning to catch bowfin and catfish, though the possibility of catching a Gulf sturgeon was in the back of his mind.

“It felt like playing the lottery,” he tells F&S. “Right when I got to the mouth of a stream-fed river that fed into the Suwannee, I saw a sturgeon jump. I was like ‘Oh my god, they’re really here.’”

Graham rigged up four rods, two of them with nightcawlers and two with frozen shrimp. He fished from 5 p.m. to 1 a.m. that night but didn’t get any bites. The weather was rainy, and the fishing remained dead the next morning. The only thing that really kept Graham’s interest was the sturgeon sporadically breaching the water. By mid-morning on Saturday, Graham was about ready to call it quits. “I was waiting for the rain to stop,” he says. “Shortly after it stopped, I was walking back and forth watching the sturgeon jump, when I looked over and one of my rods was bent over at an awkward angle, but it wasn’t moving. I thought it was snagged. I picked it up and applied a little pressure to pull it free, and it started pulling back. Even then, I thought it might be a giant turtle. I set the hook and then all hell broke loose.”

Graham had unexpectedly hooked into a Gulf sturgeon—and a big one at that. He was using a surf rod with a Penn Spinfisher LL 8500 reel spooled with 150-pound braid and a 200-pound leader. The fish took one of the rods rigged with shrimp. “I’ve caught big alligator gar before, but the sturgeon was faster and more powerful,” says Graham. “It made a blistering run upriver and then turned and went downstream and made another run.”

Graham says the fight lasted about 15 minutes. The sturgeon didn’t jump but kept “bulldogging” the entire time. Eventually, Graham was able to get the monster fish to the shallows. He kept the fish in the water while snapping a couple of photos of it. He estimated it was 6 feet long and weighed over 150 pounds. After safely releasing the fish, he sat down for several minutes to gather his thoughts. “I honestly just wanted to leave. I wanted to call everyone I know and to get the footage off my camera and onto my phone,” he says. “So, I’m sitting there about to leave, and I look over and the other rod that was baited with shrimp was slowly pulsating. I ran over and hooked into that fish.”

After another fierce fight, Graham had landed another Gulf sturgeon, a species that only a couple of anglers have ever reported catching. “Multi-species angling is all I ever do,” he says. “Gulf sturgeon is one of those fish I learned is here in the state. I never thought in a million years one would actually bite.”

Gulf sturgeon are an anadromous fish that live in the waters of the Gulf of Mexico in the southeast U.S. They’re listed as threatened under the Endangered Species Act as their populations have been impacted by dams on Gulf seaboard rivers, according to the Florida Fish and Wildlife Conservation Commission. They can reach lengths of over 8 feet long and weigh over 300 pounds. The species is related to white sturgeon, which are commonly caught in the Pacific Northwest. Surgeon are slow-growing and can live for more than 40 years. They evolved from ancestors that lived more than 225 million years ago.

“I have a particular affinity for prehistoric fish from longnose gar to bowfin—things that have lived and stood the test of time,” says Graham. “This is an animal that survived whatever killed off 70 percent of life on earth, including the dinosaurs. I just geek out over stuff like that.”

“I’ve caught a lot of cool fish, but it was so satisfying to catch a Gulf sturgeon that it was almost disappointing in a weird way,” he adds. “It made me want to go home, which is not normal. Typically, when I catch fish, I’m excited and want to keep fishing. But it was such a climactic, happy moment that it was all I needed. I don’t think anything that I ever catch for the rest of my life would match it in terms of rareness.”

Back In The Deer Woods – Bowhunting.Net

What is a ‘Stand-In Force’? Look at the Marines in Norway, Berger says

US Navy warships cruising near Taiwan as Pelosi visits