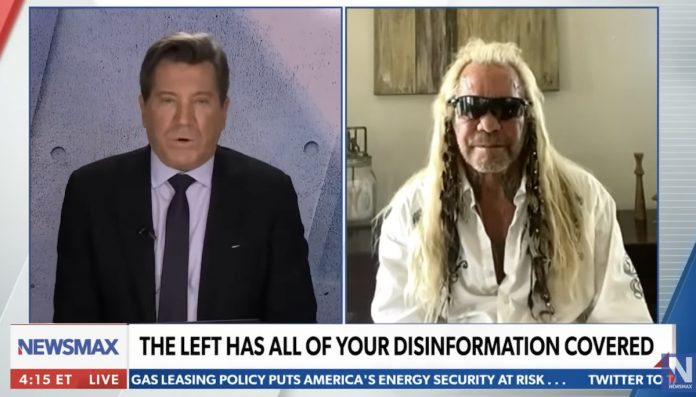 Duane Chapman, or as he’s more widely known, “Dog the Bounty Hunter,” appeared on Newsmax last month to talk about crime control with Eric Bolling, the host of “The Balance.”

When asked about ways to reduce gun-related violence, the TV personality offered up this suggestion: mental health cards for all gun owners.

“Just because some people have been shot in a park or at a supermarket to have a law to say you can’t have one there didn’t work in the first place. Here’s my idea after 40 some years of experience. You need a mental health card from a doctor that says you qualify to be able to own a gun,” Chapman explained.

Dog also said one should be forthcoming with a list of 10 references and that the card should be renewed every two years.

Bolling immediately pushed back at that notion, correctly pointing out that more red tape between 2A rights and law-abiding citizens only works to disarm those in the most vulnerable communities.

“Joe 6-pack and Sally Mainstreet have to jump through 100 hoops to get a gun to defend ourselves when the bad guys are on the mean streets just picking up guns,” said Boiling.

While the two disagreed on the mental health card requirement, they found common ground in cracking down on violent criminals caught with unserialized firearms.

“OK, so they’re going to buy hot guns without serial numbers? They are going to be punished for five years,” Chapman told Newsmax.

Dog is a convicted felon and cannot legally own a firearm under federal law. Back in the ’70s, he was convicted of first-degree murder after an altercation with a marijuana dealer turned deadly.

Dog was apparently driving the getaway car after his friend fatally shot the drug dealer. Though he was sentenced to five years, he only spent a year and a half in prison, according to Cinema Blend.

Dog and his team of bounty hunters only use less-lethal measures while pursuing fugitives from justice.

“We’ve used all non-lethal weapons. We’re going to get the lead out of the bullet and replace it with rubber and or wood. I’ve shown a thousand arrests on different networks in America in the last 15 years and I’ve been attacked (by) … machetes, shopping carts, guns, knives. I’ve shot a lot, but I’ve never killed (anyone) because on my team you will not use a lethal weapon. It’s not the gun that kills or the officer. It’s the lead in the bullet,” Dog told Fox News Primetime in 2021.

John Rigby & Co. leads from the front on the preservation of gunmaking skills with the launch of the Rigby Academy