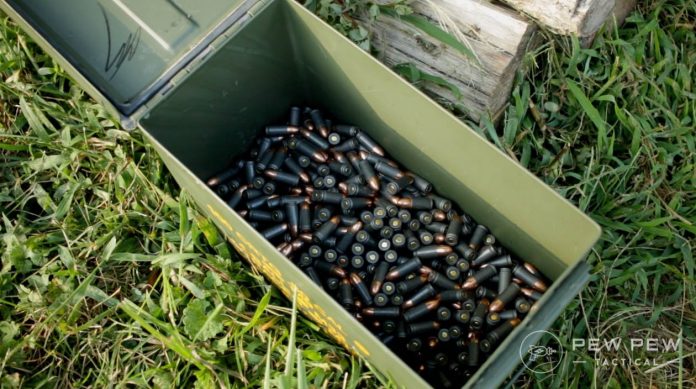 If you’re a doomsday prepper who’s always coming up with strategies to survive the zombie apocalypse, you already know how important it is to have some bullets for that weapons cache you’ve got in your gun safe.

But storing ammo isn’t necessarily as simple as putting it in a box and forgetting about it. It requires a little bit of pampering. Otherwise, you could be ruining your ammo before you ever get to use it.

Today we’re going to talk a little bit about ammo storage, as well as the dos and don’ts of caring for your stockpile so that you can squeeze more life out of your ammunition.

The last thing you want to do is create a surplus of your favorite rifle, pistol, and shotgun ammo only to find it green and corroded in the following years. Improper storage of ammo is guaranteed to bring you heartache and set you back a good amount of money as you’re forced to replenish the “spoiled” loads.

Personally, I don’t look at buying ammo as making an everyday purchase. Instead, I see it as making a valuable investment that pays off every time I want to let a few rounds fly at the range, stock the freezer with meat from a hunting trip, or need to use force to protect myself (which, fortunately, I’ve never had to do).

And just like there are ways to protect your financial investments, there are methods to keep your ballistic investments safe and secure. Let’s have a look at how.

Stay Away from Extreme Heat

For the most part, ammunition is quite resilient to extreme temperatures.

After all, when soldiers go into combat in harsh environments, they have to be able to depend on their rounds to function despite how hot or cold the temperature is.

Generally speaking, you shouldn’t have to worry about a heatwave destroying your ammo. Heat doesn’t start degrading the quality of ammo until it gets to be around 150 degrees Fahrenheit – and to put it in perspective, the hottest day ever recorded in the USA was 134 degrees, and was in 1913 at Death Valley.

With that said, you should start thinking about temperatures when you store your ammo.

If you’ve got ammunition packed away in the trunk of your car for extended periods of time, you better believe that they’re getting exposure to high temps, which could weaken or neuter your ammunition completely.

Nobody wants to spend that much money on a box of duds. So think twice before storing ammo in your car during the summer months.

And if you stash away boxes of ammunition in an attic, garage, or cellar that receives a lot of sunlight during the day, you might want to move them to a cooler part of the house during the summer months.

Like extreme heat, moisture can also cause damage your ammo. You want to make sure that your stockpile is kept away in a cool, dry place. This is especially true if you live in a humid climate like the Southeastern United States.

The biggest problem caused by humidity or excess moisture is corrosion. Prolonged exposure to moisture will cause the casing to become green and corroded. That warps the ammo and makes it unsafe to shoot.

If your storage area has a moisture problem then you should not be keeping your ammo there. That means you should avoid places that have mold, mildew, or have a constantly damp smell to it. Just to be safe, stick with a storage location that’s properly ventilated.

Many people actually seal their ammo in plastic containers to add an extra level of protection. That, along with using a dehumidifier during the spring and summer months, is a great way to reduce the likelihood of your ammunition becoming damaged over time.

If you don’t have a bunch of spare bottles around, or want something a little more stackable, it’s hard to go wrong with some plastic Plano ammo boxes.

They’re actually cheaper than a Nalgene, and can be stacked, carried, and stored easily. They can also easily store boxes of ammo, instead of just loose rounds.

Preserving the Shelf Life of Your Ammo

You shouldn’t have too much of a problem storing ammo around your house. As long as you keep them away from moisture and extreme heat, your rounds should be fine.

But what about when you store boxes of ammo in locations far away from your home, like your hunting cabin? Keeping some of your ammo stored there makes impromptu hunting trips more convenient.

There is, however, a problem with storing ammo away from home. It leaves you with little control over how protected your ammunition really is.

Fortunately, ammo cans are a great way to keep your ammunition protected against moisture.

Metal cans like this Metal Ammo Can from Cabela’s are durable, easy to carry, and are built with a waterproof seal that’s designed to keep moisture from entering the container. Best of all, they look really cool.

However, there is one caveat when using ammo cans — they have to be completely free of moisture inside. Be safe, not sorry – blast the inside of your can with a hairdryer if you think it’s a little damp.

There’s no denying that the ammo can is a game-changer when it comes to preserving your ammunition, but what about those of us with more stockpiled ammunition than our containers can hold?

Have a look at some of these tips to help you preserve the life of those aging boxes of ammo.

We’ve already talked about the dangers of humidity and how ammo cans and dehumidifiers can help. If neither of those options is feasible, you can keep your ammunition dry by storing it with desiccant packets.

Those are the little white sachets of silica gel that come with products that require absolute dryness, like freeze-dried foods and medicine.

You can buy them in bulk on Amazon, or you can make your own with a sock and silica-based cat litter purchased from your local supermarket.

Also, if you order gun parts, computer parts, shoes…just about anything that needs to be kept dry, you’ll find one in there.

The first thing you should do after purchasing ammo is write the date of purchase on your storage container. This will help you keep track of the various ages of your ammo.

Use your older ammo first so that you keep the newest ammo on hand. Remember, old ammo in the front, new ammo in the back.

Use smaller bullet boxes like a pistol ammo case to keep batches separate within a larger container like an ammo can.

If you don’t have one already, consider getting a good-sized gun safe with a couple of extra shelves for your ammo and other gadgets.

This keeps your ammo away from children and pets, as well as protects it from the elements.

A good gun safe is will prevent moisture from accumulating (although you might want to toss in a couple of desiccant packets for good measure) and will help protect your ammo from extreme temperature.

Be sure to get one that’s fireproof just in case.

Just remember, ammo needs the same kind of love and care as your rifles, shotguns, and pistols. You can’t just buy ammo, let it sit neglected in a corner of your attic or basement for years, and still expect it to function properly.

Extending the life of your ammunition to a decade and beyond is not rocket science. As long as it’s stashed away in a cool, dry place, you should be good to go.

Do you have any tips to prolong ammo shelf life that I missed? Let me know in the comments. And if you’re in search of the best places to buy and best ammo to stockpile, check out our Guide to Ammo & Reloading, where we cover recommendations for all popular calibers.

“…grateful to ALMIGHTY GOD for the free exercise of the right…”