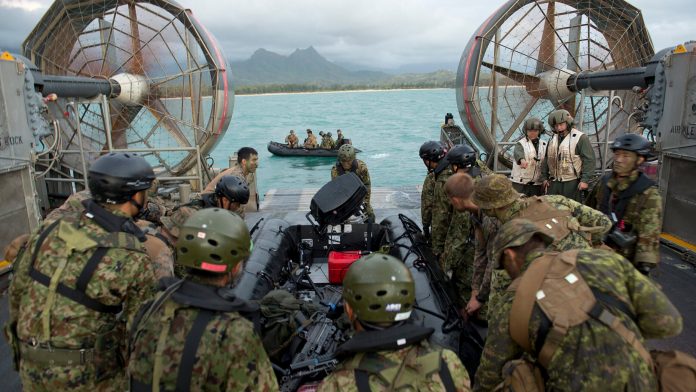 US Marines alongside counterparts from Canada and Japan unload a combat rubber raiding craft off a landing craft air cushion assigned to Assault Craft Unit (ACU) 5 as part of a training exercise during Rim of the Pacific (RIMPAC) Exercise 2014. A wargame hosted by the US Navy today featured sailors and Marines operating near a fictitious island in the western Pacific. (U.S. Navy photo by Mass Communication Specialist 2nd Class Bryan M. Ilyankoff/Released)

WASHINGTON: A US Navy warship is conducting amphibious exercises near an island in the western Pacific when a typhoon forms nearby and begins making its way toward the ship and potentially Marines who have landed on the island. What happens next?

That was roughly the question a group of academics, Capitol Hill staffers, think tankers and Defense Department personnel — ranging from enlisted to folks “with several stars on their shoulders” — sought to answer during a war game the Navy hosted today that focused on how the impacts of climate change might interfere with future operations.

The answer, according to a Meredith Berger, a senior Navy civilian who coordinated the event, is that things get complicated very quickly.

“There is [a] severe impact,” she told a group of reporters following the event. “What happens operationally? Do you keep the ship in the in the line of a storm or do you move them? How do you care for your Marines? What do you need to do in terms of communication? What do you do when communication goes down?”

Typhoons have obviously interfered in naval operations for centuries, but researchers say the global increase in greenhouse emissions are causing more frequent and more powerful storms. Today’s event was the first tabletop exercise in a series the service plans to conduct as a follow up to the Climate Action 2030 document Navy brass signed out in May.

“2030 is the marker that we laid down initially because the scientific community and others have said that this is the decade of decisive action and so we’re taking that very seriously,” Berger said of that document at the time. With that in mind, the war games are being held to consider what kind of climate-related problems may end up disrupting Navy operations.

And it’s not just problems inside a ship’s area of responsibility — a typhoon for example — that could cause issues. Berger said the players also contended with problems such as a wildfire in California resulting in the force’s logistical supply chain being disrupted. “That is is an example of a very timely and real world scenario,” she added.

Berger said the key takeaways from today’s exercise boiled down to two things. The first is that most of these issues are predictable and the service must prepare to deal with them now if they do come to fruition later. The second is that, as the old proverb goes: amateurs talk about strategy, but professionals talk about logistics.

“When you have a young Marine out there, if you ask him or her which [they’d] rather be carrying: batteries or bullets? The answer is bullets,” she said. “But we need to make their packs lighter… We need to make them more effective when they are actually in the fight… And so that’s the conversation that we’re having today.”

Red Flag Laws Are Both Dangerous and Un-American

8 Of The Best EDC Tools for Urban Survival

Ruger Announces the New LC Carbine in 5.7×28 With Side-Folding Stock