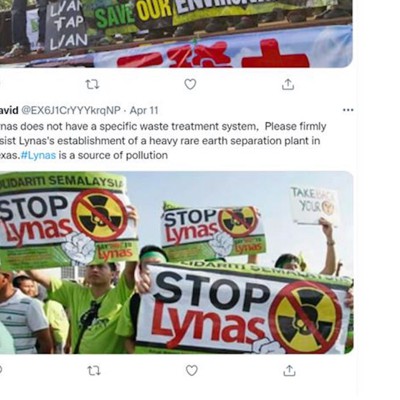 A Chinese disinformation effort against a Pentagon contractor building a rare-earths plant in Texas may herald a new era of such tactics against Western companies.

On Tuesday, U.S. defense officials said they and “partner nations” were looking into the campaign against Lynas Rare Earths, an Australian company with a $120 million contract to build a separation facility in Texas.

They credited cybersecurity firm Mandiant with discovering the campaign by the DRAGONBRIDGE group, which works to advance the interests of the government of China, or PRC. Mandiant’s report said the group designed social media posts to make it appear that Texas residents were objecting to the new site on environmental grounds. They also took aim at the Biden administration’s recent effort to increase the domestic supply of rare earths minerals.

“​​While the activity we detail here does not appear to have been particularly effective and received only limited engagement by seemingly real individuals, the campaign’s microtargeting of specific audiences suggest the possibility of using similar means to manipulate public discourse surrounding other U.S. political issues to the PRC’s advantage,” the Mandiant report said.

The campaign wasn’t especially sophisticated. The perpetrators made some simple mistakes like using stock photos for profile images and creating a lot of the accounts at the same time.

But John Hultquist, vice president of Mandiant Threat Intelligence, told Defense One on Wednesday that he expects the group to refine its technique.

“They’re still getting their legs under them, dealing with all the complexity of cross-cultural communication,” Hultquist said. “There’s still language issues and definitely issues with engagement…But they’re clearly invested.”

China’s international efforts may be nascent, but its government has vast experience making propaganda aimed at domestic consumption. The state employs up to half a million people in social-media messaging, the cybersecurity company Recorded Future estimated in 2019.

“One of the things that’s distinct about Chinese activity, compared to some of their peers, is that they’re always highly economically focused,” Hultquist said.

That means that while U.S. politicians are learning to deal with disinformation attacks, private companies generally haven’t had to.

“There’s a whole new group of targets that probably don’t have strong experience dealing with this problem,” he said.

Such attacks will likely proliferate as Chinese and U.S. economic interests continue to diverge, Hultquist said: “As that [decoupling] process gets underway, more industries will find themselves the same sort of strategic situation that rare earth metals are are now.”

Flight with Uruguayan rugby team crashed in the Andes.

What Happened to the Walther PPX and Creed?