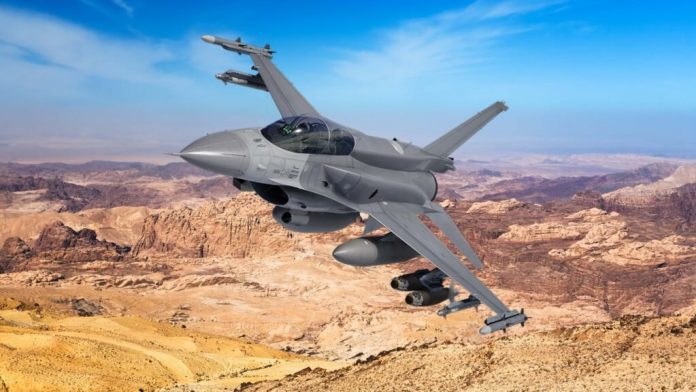 Promotional art for the F-16 Block 70 for Jordan. (Lockheed Martin.)

BEIRUT: As Jordan’s leader publicly raised the idea of a Middle East NATO-like alliance, his Air Force has marked a significant upgrade with the signing of a Letter of Offer and Acceptance for eight F-16 Block 70 aircraft from Lockheed Martin.

The LOA was signed June 17 with a Lockheed spokesperson telling Breaking Defense “We anticipate the production contract for this LOA will be complete in the next year,” with deliveries expected to start in 2027.

The US State Department approved the sale of 16 F-16 fighter jets in February 2022, with an estimated price tag of $4.21, but this number was reduced to half in the letter of acceptance signed by Maj. Gen. Yousef Al-Hnaity, chief of the Jordanian armed forces, and Brig. Gen. Mohammad Hiyasat, commander of the Royal Jordanian Air Force (RJAF).

“This is a function of the Foreign Military Sales process. We continue to partner with Jordan and the U.S. government on finalizing the LOA for the additional eight jets,” the Lockheed spokesperson responded to Breaking Defense regarding the cut.

Indeed, the publicly announced dollar and quantity figures for FMS cases often shift when a final contract is negotiated. But Ryan Bohl, a Middle East and North African analyst at the Stratfor/ RANE Network, noted that budget constraints were likely a factor in Jordan downsizing its request.

“Likely cost is one notable reason Jordan is purchasing only eight; the Block 70 costs around $63 million per unit, and eight of these planes are already around a quarter of its $2 billion 2019 defense budget,” he told Breaking Defense.

Bohl added that Jordan’s economy, and its national budget, is still trying to recover from the effects of the COVID-19 pandemic, constraining its ability to make big purchases.

“Additionally, the United States has not upped its foreign military aid to Jordan to help it purchase more Block 70s; the US is Jordan’s largest military aid supplier, and at the moment US aid is more focused on Jordan’s economy (and therefore internal stability) than its air force and ability to defend itself from external threats, which are compared to internal unrest less a threat to Jordan right now,” Bohl said.

“Jordan has a relatively large, if aging, air force. It uses the F-16A as its primary combat aircraft, which can carry out regional missions against terror groups like the Islamic State in Syria. For longer-distance missions, Jordan is more reliant on allies like Saudi Arabia or the United States for mid-air refueling and intelligence support. However, Jordan is not currently involved in distant military missions, and appears to have halted its air campaign in Syria after the suppression of ISIS,” Bohl said.

Bahrain is also under contract for the Block 70, under a $1.12 billion deal for 16 aircraft; the flight tests for Bahrain are planned to begin in early 2023. These new F-16’s will be built in Greenville after finalizing the contract. The production rate in Greenville is four aircraft per month, according to the Lockheed spokesperson.

“The F-16 Block 70/72 production rate will increase significantly throughout 2023, with deliveries for additional customers continuing into the mid-to late-2020s,” the spokesperson said.

What Next for Jordan’s Air Force

There are signs that Jordan is looking to expand its military ties to other powers in the region, something that would likely require increased investment in key defense areas.

Jordan is believed to be tied into the June 20 Israeli announcement about a regional integrated air defense network. Perhaps more notably, Jordan’s King Abdullah II raised eyebrows with his June 24 statement that he supports a military alliance in the Middle East similar to the Western-led NATO.

Bohl says it makes sense that Jordan would be involved in such efforts as they are stood up, but added that there’s still a fair bit of political work to do before a formal, NATO-style alliance could work in the region, saying “Egypt and Jordan do not, for example, want to be pulled into war with Iran, and the UAE, Jordan, Bahrain, and Israel do not want to find themselves stuck fighting on behalf of Egyptian interests in Libya or, more distantly in the future, Ethiopia.”

In 2022, Jordan’s defense budget has been set at $1.9 billion, with an expected growth of 4% between 2023-2027, as reported by a Globaldata budget analysis report. According to Bohl, the government in Amman has clear focus areas for where to spend that money.

“At least three major areas would be the subject of growth: continued modernization of the Jordanian air force, increased air defense capabilities (and possible integration of such a system with fellow US allies like Israel, the United Arab Emirates, and Bahrain) to block Iranian threats, and focus on anti-terrorism at home through increased training, equipment, and salaries,” Bohl said.

However, which of those three areas will get the biggest boost will depend on regional developments: if there is a US-Iran nuclear deal, air defense may drop in priority in favor of air force modernization; if there is a resurgence in terrorism, then internal security would be the priority; if there is a continued or escalated US or Israeli-Iran confrontation, then air defense would likely emerge as the main thrust of increased spending.

One area that is already seeing increased spending for the air force ties back to the F-16 procurement. On February 11, the US Defense Security Cooperation Agency (DSCA) announced that the State Department approved a Foreign Military Sales case for an F-16 Air Combat Training Center (ACTC).