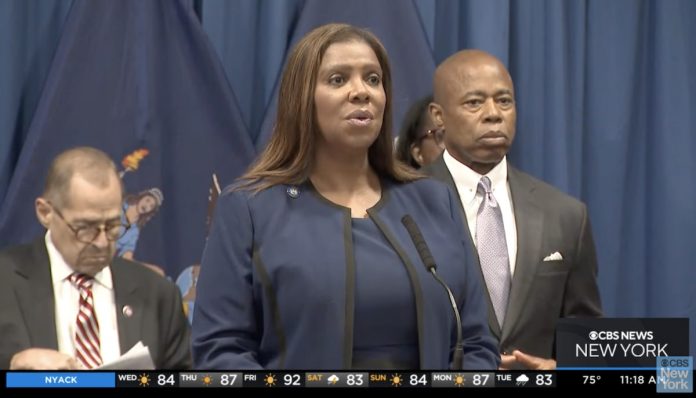 Attorney General James alleges in her suit that 10 companies violated several laws by selling thousands of gun parts and kits to felons and other prohibited persons because no background check was conducted.

“While families mourned loved ones lost to senseless gun violence, gun sellers avoided accountability for the illegal and dangerous weapons they sold,” said Attorney General James in a press release obtained by GunsAmerica.

“There should be no more immunity for gun distributors bringing harm and havoc to New York. Today’s lawsuit holds 10 gun sellers accountable for fueling the gun violence crisis and endangering New Yorkers,” she continued. “Illegal guns do not belong on our streets or in our communities and we will use every tool necessary to root them out.”

The lawsuit targets the following businesses:

“Whether they are hidden in the trunks of cars or packed in a plain brown box, ghost guns are illegal in our city, and we will take every lawful action possible to stop gun retailers from profiting at the expense of the safety of our city,” he added.

Sylvia Hinds-Radix, the city’s Corporation Counsel, told CNN that they are asking the court to not only shut down sales to city residents but also compel the companies to disclose which New Yorkers purchased their products.

The rule singles out products that allow an unfinished frame or receive to be “readily converted” into a functioning firearm component, and states that these products are now considered “firearms” under federal law.

This new rule doesn’t ban homemade gun kits, but it does subject these kits to the same regulations and background check requirements as other firearms.

The implementation of the Biden rule is set to kick in in the coming weeks.

What Letitia James is doing is nothing more than B.S.—that is, she’s heaping a huge pile of Blame Shifting to distract the public from her failed policies. For years, the Attorney General of New York has advocated laws that throw criminals back on the street before they are rehabilitated. But rather than take ownership of her own failed policies for the rise in crime, James is instead trying to blame gun companies—and homemade guns. However, that tired ole’ dog won’t hunt, because the statistics don’t support her claims.

According to the Department of Justice, privately made firearms were found at 692 homicide or attempted homicide crime scenes over a six-year period. That means that, at worst, out of more than 16,000 yearly murders, homemade guns are used in around 115 homicides per year. That’s far fewer murders than many common items which are easily found around one’s house—such as knives (1,476), hammers or blunt objects (397), or fists and feet (600).

Homemade guns have been a part of the American experience for over 200 years, and there are very good reasons as to why law-abiding gun owners would want to make their own guns and keep them “off paper.” Perhaps they don’t want to be doxed, as Californian gun owners were this past week. Or maybe they don’t want to be included in ATF’s illegal, partial, national gun registry. Or maybe they just want to build an effective defense gun, as at least one Connecticut gun owner reportedly did to protect his family from a possible home invasion.

Letitia James should consider how good guys and gals with guns are dropping murder rates in places like Brazil, which had violent crime rates that rival the dangerous, gun controlled areas in our cities. But limiting guns that good people can own, by punishing the companies that help gun owners to exercise their Second Amendment rights, will do nothing to curb crime—and will certainly do no good while zealous politicians continue their “catch and release” program with criminals.