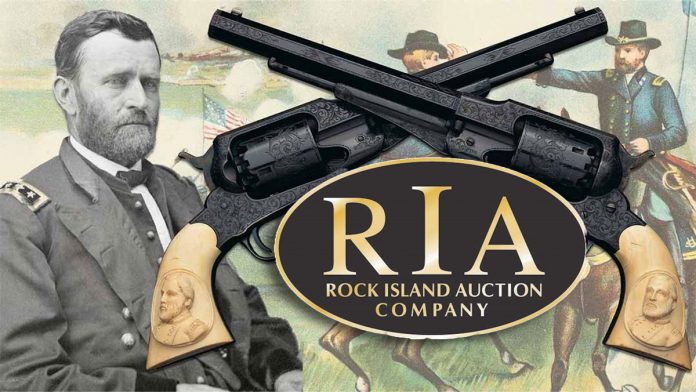 A 44 caliber percussion single-action revolver, the Millikin Dragoon was highly sought after for its combination of master engraving done by Gustave Young, great preservation of both the bore and exterior and its heavy ties to Civil War history in the United States. The Millikin Dragoon was originally owned by Colonel John Minor Milliken Jr. (misspelled on the revolver by the engraver) a heroic Union Army officer who was killed in action while leading a saber charge against Confederate forces at Stones River near Murfreesboro TN. If you don’t know who Napoleon Bonaparte is then you’re probably either still not able to legally own a firearm in the United States, or you failed all of your history classes in school. This collection of six different weapons includes five relief carved firearms plus a gilt dress sword. The presentation was given to the Duke of Abrantes, Marshall Junot, by Napoleon and the duke kept these weapons in his possession until his death. After this, the Dutchess of Abrantes eventually sold the weapons to an officer who was serving under Napoleon and from there the entire set eventually made its way back to its original manufacturer, Boutet, for reconditioning before they went on display in London in 1816 after the final defeat of Napoleon at Waterloo. The entire set sold at auction in December of 2021 for $2,875,000 making it the second most expensive lot in RIAC’s history.

Fabled to have been presented to General Grant after he captured Vicksburg on the 4th of July in 1863, this pair of New Model Remington Army revolvers are arguably the most significant finds from the Civil War era. The revolvers spent much of their time after the civil war shrouded in mystery until 2018 when they found themselves being displayed at the Las Vegas Antique Arms Show. Featuring engraving from L.D. Nimschke, one of the most renowned master engravers of the 19th century, grips carved with the visage of Grant himself, and of course, a matching case, powder funnel, and bullet mold, this pair of revolvers fetch a whopping  $5.17 Million dollars at auction shattering previous RIAC records in May of 2022.

Items owned by Grant are among the most desirable 19th century American artifacts, particularly artifacts presented to, owned by, or used by General Grant during the Civil War,” said Kevin Hogan, President of Rock Island Auction Company. “They’re significant works of American art, a powerful piece of American history, and completely fresh to market. It’s an incredibly exciting time to be a fine arms collector.

A Price To Preserve History

These firearms are all now largely in private collectors’ hands. There are probably many out there screaming that these types of firearms and militaria should be stored in a museum somewhere (Indiana Jones eat your heart out). However, there is nothing to stop these private purchasers from loading these treasured historical items to a local or national museum, and as such, we can always hold out the slim hope that some of these items might make their way into places like the Cody Firearms Museum where there are already thousands of historical firearms on display that help document and contextualize our rich history in this country – faults and all. Let us know what you found interesting from this list of Rock Island Auction Company’s top 4 most expensive firearms. If you were a discerning potential collector and had the money, would any of these top four items interest you as a collector’s item? Also, be sure to check out the remainder of Rock Island Auction Company’s top-selling items here! All photos and information gleaned from the Rock Island Auction website with permission.