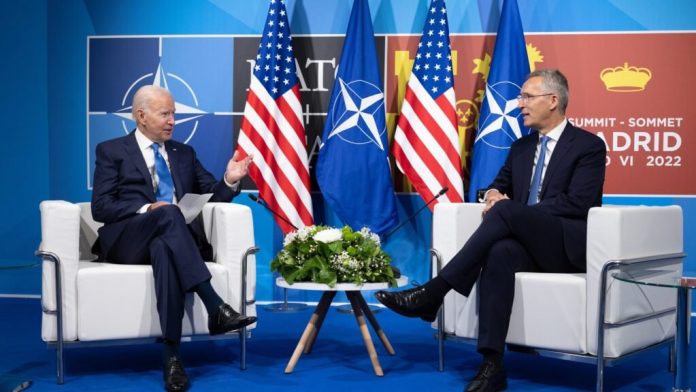 WASHINGTON: In the span of 24 hours, NATO has cleared the way for Sweden and Finland to begin their membership drive, introduced as new strategic concept for the alliance and seen the US dramatically its footprint in Europe.

It’s a flurry of action that would have seemed unlikely, if not impossible, just months ago. But Russia’s February invasion of Ukraine has spurred a renewal of the alliance — something leaders have used the early hours of the Madrid summit this week to underline.

“In a moment when [Russian president Vladimir] Putin has shattered peace in Europe and attacked the very, very tenets of the rules-based order, the United States and our Allies — we’re going to step up. We’re stepping up,” US President Joe Biden said in remarks at the summit. “We’re proving that NATO is more needed now than it ever has been and it’s as important as it has ever been.”

The US announced today it will be increasing its forces across the continent, starting with the creation of a permanent presence in Poland, made up of the V Corps Headquarters Forward Command Post, an Army garrison headquarters, and a field support battalion. In a statement, the Defense Department described this as the “first permanent U.S. forces on NATO’s Eastern Flank,” and will be accompanied by continued support for rotational forces in Poland, including “an Armored Brigade Combat Team, Combat Aviation Brigade element, and Division Headquarters element.”

Speaking to reporters, Celeste Wallander, the assistant secretary of defense for international security affairs, called the Poland move “a significant decision precisely because of the changed security environment and the recognition that the United States needs to have a longer-term capability to sustain our presence, our training, our activities and our support to the countries of the eastern flank, both bilaterally and through the NATO battle groups — battle groups which are in those eight forward flank countries.”

Other force posture changes include:

Speaking to reporters, National Security Council spokesman John Kirby defended the decision not to place more permanent forces in Europe, saying the US “presence will stay persistent, but it won’t always be the same brigade combat team for years and years and years or any other aircraft squadron. They’ll be the — we’re setting this up in such a way that we can rotationally deploy at higher levels in Europe than we had before the invasion.”

NATO’s new force posture — which will include the first permanent U.S. presence in Poland — doesn’t include a permanent troop presence in the Baltics as those countries have requested.

A question that will only be answered in time is whether the increased force posture in Europe will impact America’s long-stated desire to pivot to the Pacific. Eric Sayers, a Pacific expert with the American Enterprise Institute, noted on Twitter, “I’m for Ukraine assistance but stepping up deployments across Europe while doing little to nothing new in Asia only reinforces view that Asia comes second/last.

“When we make commitments in Europe the resources ALWAYS flow,” Sayer continued. “In Asia, we talk a great game but have little to demonstrate our follow through. This only makes the perception gap more striking. Japan and Australia are scratching their heads.”

NATO’s new Strategic Concept, published today and setting the tone for the Madrid summit, is like many documents of its type more about policy posture than hard details. But a few things stand out from what Secretary General Jens Stoltenberg called “the biggest overhaul of our collective defense deterrence since the end of the Cold War.”

The document — the first formal update since 2010, even before Russia’s first 2014 invasion of Ukraine and annexation of Crimea — for the first time mentions China, with the alliance warning that Beijing’s “ambitions and coercive policies” are a “challenge our interests, security and values.”

China’s “malicious hybrid and cyber operations and its confrontational rhetoric and disinformation target Allies and harm Alliance security,” the document continues. “The PRC seeks to control key technological and industrial sectors, critical infrastructure, and strategic materials and supply chains. It uses its economic leverage to create strategic dependencies and enhance its influence. It strives to subvert the rules-based international order, including in the space, cyber and maritime domains.”

And notably, “the deepening strategic partnership between the People’s Republic of China and the Russian Federation and their mutually reinforcing attempts to undercut the rules-based international order run counter to our values and interests,” the report warns. “We will work together responsibly, as Allies, to address the systemic challenges posed by the PRC to Euro-Atlantic security and ensure NATO’s enduring ability to guarantee the defence and security of Allies.”

Said Kirby ahead of the formal document release, “Clearly, our Allies have likewise been concerned about this growing, burgeoning relationship between Russia and China. They have growing concerns about China’s unfair trade practices, use of forced labor, theft of intellectual property, and their bullying and coercive activities not just in the Indo-Pacific, but around the world.”

Unsurprisingly, the concept takes a hard line towards Russia. Whereas the 2010 document referred to the goal of having a “true strategic partnership between NATO and Russia,” the news concept called Russia “the most significant and direct threat to Allies’ security and to peace and stability in the Euro-Atlantic area.”

Additionally, the concept does not back down from NATO’s commitment to nuclear weapons. “As long as nuclear weapons exist, NATO will remain a nuclear alliance. NATO’s goal is a safer world for all; we seek to create the security environment for a world without nuclear weapons,” the document reads.

The concept also notes that the “security of countries aspiring to become members of the Alliance is intertwined with our own. We strongly support their independence, sovereignty and territorial integrity.”

That’s a clear signal that while aspirant nations may not be granted the Article 5 protection of full NATO members, the alliance leadership won’t abandon a country that has begun the NATO process but not been fully accepted.

Which is to say, in the context of this week, Sweden and Finland. Both nations applied for membership in May after years of riding the line between NATO and Russia, with leaders in both countries saying the plunge towards the alliance was a direct result of the Ukraine invasion. But Turkey held up the start of their membership push until Tuesday, when a deal was reached between the three nations.

RELATED: Norway’s chief of defense: Finland, Sweden in NATO ‘opens up a lot of possibilities’

As a result, NATO today formally accepted Sweden and Finland as aspirants to the alliance, kicking off the process which will now require all 30 members to approve the Nordic nations joining. It is expected the process will move quickly in the US, where adding the two new NATO members may be one of the only things the US Senate can agree on in a bipartisan fashion.

Gun Meme of the Day: They Don’t Make ‘Em Like They Used To Edition