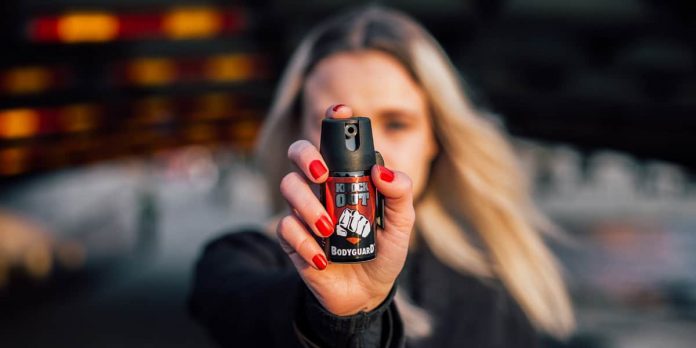 Tasers and pepper sprays are both effective, non-lethal self-defense methods, but which is the best?

Using 10 different categories, we explore the pros and cons of each to establish which one comes out on top.

Both pepper spray guns and tasers range in price from as little as $15 to over $1,000. Many stun guns and tasers are rechargeable, so once you’ve bought one, you don’t need to part with any extra cash to keep it operational.

If you opt for a pepper spray gun, you need to budget for the refills or replacement cartridges. Pepper spray refills are much more affordable than the pepper ball cartridges, costing less than $20, as opposed to several hundred.

If you take the best pepper spray gun and compare its price to our favorite stun gun for women, the stun gun comes out much cheaper and won’t require any additional investment further down the line.

The stun gun is, therefore, the best option in terms of price.

Both stun guns and pepper spray devices have long lifetimes, though they both need some maintenance to keep them operational.

The batteries in a rechargeable stun gun or taser usually last for around two years, after which they’ll probably need replacing.

Similarly, pepper spray has an expiration date, even when stored correctly. Like any aerosol, pepper spray canisters lose pressure over time, and the last thing you want is for your self-defense weapon to be spitting instead of spraying!

There is no clear winner in this category, making it a tie.

See our guide to the best pepper spray for self-defense.

Both pepper sprays and stun guns are simple to use and include safety features intended to prevent accidental discharge.

As the pepper spray has a longer range, it requires more accuracy when firing. The MACE® pepper gun 2.0, for instance, has a range of up to 20 feet, but if you’re not sure you could hit a target at that distance, a stun gun is probably a better option.

Another problem with pepper spray is that it can be difficult to use accurately in high winds. You could even pepper spray yourself if you fail to judge the wind’s direction correctly.

Most stun guns require physical contact to work effectively, which means you need to wait until your target is close enough to touch. That can be intimidating, especially if your assailant is much larger and stronger than you.

Fortunately, most stun guns and tasers have safety features that prevent your attacker from using the device against you. It’s still risky to let someone into your personal space, and you may lose your nerve before you have a chance to discharge your weapon.

A few premium tasers shoot barbed prongs up to 15 feet away, but that level of self-defense will cost you several hundred dollars.

Each self-defense methods has its pros and cons, but the stun gun manages to win this category based on its ease of use and the fact that it’s far more difficult for an assailant to use the weapon against you.

Buying a taser that will operate over a longer distance requires some serious investment, with most requiring physical contact. A powerful pepper spray gun can stop an attacker several feet away, reducing the risk of injury.

Unfortunately, most pepper sprays are only as effective as your aim. Pepper ball guns are more forgiving when it comes to accuracy as the balls will explode on contact, so even if they explode several feet away from your attacker, they should still have the desired effect.

If you’re unsure of your aim, a taser is a more reliable weapon. As long as you can make contact with your assailant’s torso, a stun gun will stop him in his tracks.

A pepper spray gun gives you more options in terms of how close you need to be to make it effective, making it the winner in this category.

The best way to prevent an attack is with a self-defense weapon that works immediately. Both pepper spray and stun guns fit into that category.

The moment the pepper spray makes contact, it will start irritating your attacker’s eyes, skin, nose, and throat, making it difficult to breathe. If you fire pepper spray from several meters away, there may be a short delay of several seconds before it takes effect.

As you discharge a stun gun or taser, it starts to take effect. Even half a second’s contact is enough to startle and confuse an attack, while three seconds will result in disorientation and a loss of muscle control and balance.

While the irritant effect of being hit by pepper spray lasts for around 30 minutes, a stun gun can leave your assailant incapacitated for anywhere between 5 and 60 minutes.

Once again, the taser proves to be the superior self-defense weapon in this category.

Most people opting for a non-lethal self-defense weapon do so because they want to avoid the possibility of legal complications later on and because lethal weapons require more training and practice than non-lethal ones.

Given that situation, you want to avoid a non-lethal weapon that could inflict lasting or potentially fatal injury.

Pepper spray is one of the safest non-lethal self-defense weapons. It will cause short-term irritation only but presents no risk of fatality.

Tasers are also safe in most situations. In a handful of instances, however, studies show that tasers can “cause sudden cardiac arrest and death.”

If you want to avoid the legal ramifications of killing someone in self-defense, pepper spray is your best choice, making it the winner in this category.

To be confident about carrying a self-defense weapon, you need to be sure that it won’t discharge accidentally, be used against you, or conk out when you need it most.

Quality pepper guns are unlikely to malfunction, but they can be easily used against you. They also come with built-in safety mechanisms that prevent accidental discharge.

Stun guns usually have two safety features – one to prevent accidental discharge and the other to stop the weapon from being used against you.

The JOLT mini rechargeable LED triple stun gun has a safety pin attached to a lanyard which means, should someone grab it out of your hands, it will be rendered useless.

The ease with which a pepper spray device could be used against you works against it in this category, making the stun gun the winner once again.

The element of surprise can make all the difference during an attack. If an assailant thinks you’re unarmed, they will be unprepared for any weapon you do draw against them.

A stun gun is easy to conceal, especially if you opt for a knuckle-duster style device that fits easily into the palm of your hand.

Similarly, pepper spray keychains are discreet and artfully disguised as a harmless accessory. Pepper spray guns are more difficult to hide or disguise but are still small enough to conceal.

With little to separate the two this category is a tie between pepper spray and stun gun.

Although it is legal to use and carry throughout the United States, some states restrict the use of pepper spray. In Hawaii, for instance, you can only legally use canisters that weigh 0.5 ounces or less. In California, it’s limited to 2.5 ounces, but also prohibits anyone addicted to any narcotic drug from using a pepper spray device.

Until recently, tasers and stun guns were banned in Hawaii, New York, and Rhode Island. Hawaii legalized stun guns at the beginning of the year but still restricts their sales. Vendors must perform full background checks on anyone purchasing a stun gun or taser. They must also offer training on how to use the weapon correctly.

If you’re someone who travels extensively, the fluctuating state laws regarding stun guns could leave you on the wrong side of the law, in which case, a pepper spray is the better choice, giving it the win in this category.

Although you can carry pepper spray or a stun gun in most states, some restrict their usage. There are also nationwide restrictions that apply to specific situations, like flying.

While it’s perfectly acceptable to put a pepper spray canister in your checked luggage, you’re not allowed to keep it in your hand luggage.

Similarly, stun guns and tasers can be checked in, assuming they’ve got a safety mechanism that prevents accidental discharge, but can’t be placed in your carry-on bag.

Some states, like California, have banned school pupils from carrying stun guns and tasers but do allow pepper spray on the school grounds.

In other states, like Illinois, Indiana, and Michigan, you need a permit for a stun gun but not for pepper spray. Very few places require permits for pepper spray, so unless you’re heading to either Washoe County and the City of Las Vegas, this is a better choice.

Pepper spray is arguably the least restricted self-defense weapon in the US and is, therefore, the winner in this category.

Both pepper spray and tasers have their pros and cons. Tasers are more expensive, while pepper sprays need refilling more frequently. Tasers and stun guns are more heavily restricted than pepper spray but are easier to use and more reliable.

In a head-to-head comparison of these two non-lethal self-defense weapons, there’s no clear winner. Both do an effective job of protecting you against attack and are easy enough to both carry around and deploy.