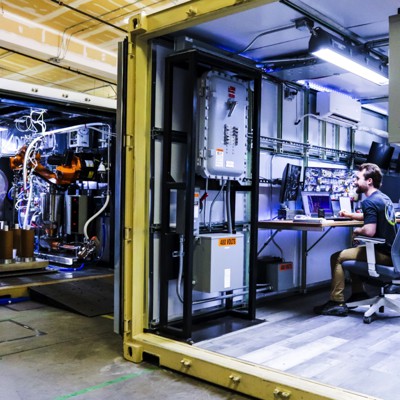 The U.S. Air Force will test a “rocket factory in a box” made by a New Mexico startup in hopes of being able to 3D-print missile energetics.

The technology could allow the military to get solid rocket motors for less money, more quickly, and in remote locations.

“This is a technology push forward to see what the art of the possible is,” X-Bow Systems CEO Jason Hundley said in an interview.

For years, the Pentagon has talked about the need to diversify its space launch locations and get satellites into orbit in a matter of days.

“The Air Force Research Labs’ goal is to prove that a technology like this could actually exist and be movable and transportable,” Hundley said. “Part of our future work with the Air Force will be evaluating, you know, the effectiveness of that in different potential scenarios.”

X-Bow, pronounced “crossbow,” was founded in 2016, but operated in secrecy until March. In April, it announced it had raised $27 million in a Series A funding round. Lockheed Martin Ventures is among the startup’s investors, which is of note since the Federal Trade Commission blocked Lockheed from acquiring Aerojet Rocketdyne, which also makes solid rocket motors.

Solid rocket fuel is most commonly used in intercontinental ballistic missiles, anti-missile interceptors, and other military missiles and rockets. It is typically made by combining the raw materials in giant mixers, then pouring the solution into a rocket motor case. The casing is then put in a pit where it cures for several weeks.

Setting up a brick-and-mortar rocket factory takes years and costs hundreds of millions of dollars, Hundley said: “You’re talking stuff that weighs multiple tons, and takes two to four years of lead time to order one, [and] get it installed and checked out.”

By comparison, X-Bow’s mobile factory travels inside four 20-foot shipping containers. Each box has a purpose: one is a control room, another holds the raw materials, another carries manufacturing equipment, and the last has the power and air-handling equipment to make it all work.

“Our process starts with raw chemicals and then basically at the other end, you’re essentially… printing the energetics,” Hundley said.

And the fuel cures in one day, he said.

The company began work on the rocket factory-in-a-box concept for the Air Force last year. It can currently produce hundreds of pounds of inert solid rocket fuel, Hundley said.

X-Bow plans to continue proving out its technology in the coming years. It believes its rocket motors could cost 80 to 90 percent cheaper than the factory-built motors of today, Hundley said. While the company doesn’t have its eyes set on the Air Force ICBMs and NASA rockets already in development, it believes its tech could be valuable on new types of rockets.

“Collapsing that time variable and that cost variable allows for entry of potentially new products,” he said.

“The industry is over capacity right now,” he said. “They cannot meet the demand and they are turning away smaller-end customers that we think will be excited to have somebody hand them a product within months, as opposed to five years down the line and when the big guys could get to them.”

Hundley compared the solid rocket motor industry to the orbital launch industry two decades ago. After years of consolidation, the Air Force relied on a single concern, the United Launch Alliance, to carry large military satellites into orbit. Then SpaceX came along and injected competition into the industry and lowered launch costs for the government.

“With our technology and our ability to basically rapidly turnaround the design timeframe, we think that we’re going to see competitive opportunities for our business to grow very, very quickly, in the next few years,” he said.