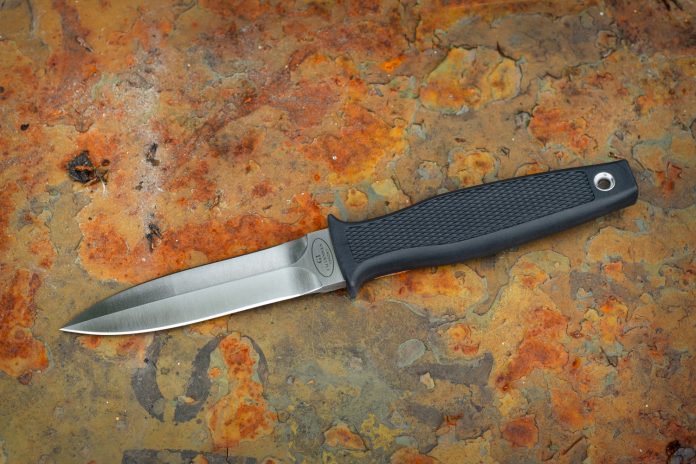 Fällkniven AB is a family-owned company from northern Sweden, located close to the arctic circle. The name means “folding knife” and the business was founded in 1984. In 1987 they started developing their own knives. Their G1 Garm Fighter knife was first released in 2001 and sold until the end of 2015. The company is now reintroducing this knife.

Back when it was first introduced, the Garm Fighter knife was made of VG10 steel. This time the U.S.-made powder steel CPM20CV is used, with a hardness of 60-61 HRC. The weight of the knife is 91 grams. The blade is 91mm long and 4.5mm thick, with a flat ground edge. The total length is 191mm. The sheath is made from Zytel. The handle is made of Thermorun. Here is the product release in full:

In Norse mythology, Garm is referred to as a dog or wolf who, with his barking, foreshadows Ragnarök, i.e. the doom of the world. If you penetrate a little deeper into the texts from that time, i.e. a thousand years ago, the image of Garm becomes more multifaceted where Garm is likened to something sharp, something that hurts, something that is dangerous. Whether Garm is the same as Fenrisulven we leave unsaid.

G1 Garm Fighter is a high quality collectible item that is legal to sell, own and transfer, nota bene you are 21 years or older. However, the knife, like all knives, is usually forbidden to carry in public places as well as in schools, arenas, airports, cars in public places and similar areas where the public has access.

The price is 2,878 SEK, about 280 USD and if you like, you can add gift wrapping, text or logotype engravings. You can find a direct link to the G1 knife here: https://fallkniven.se/en/knife/g1z-garm-fighter/

Do you own a knife made by Fällkniven? What do you think of the G1Z Garm Fighter?