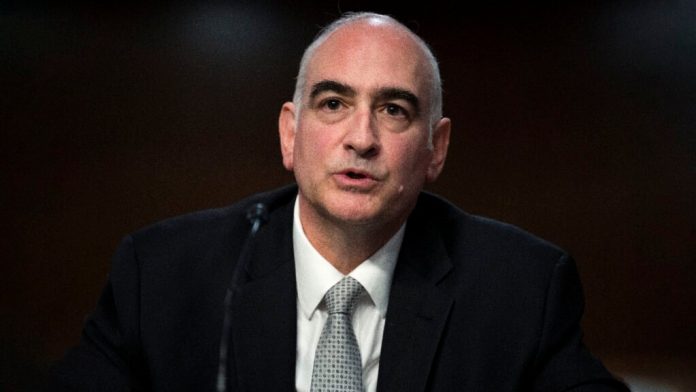 WASHINGTON: Focusing on speed, the new civilian head of space acquisition, Frank Calvelli, really hates what he sees as unnecessary reorganization — and has no plans to overhaul the Space Force’s three main procurement units.

“I’m not a big, you know, ‘reorganize for the sake of reorganizing’ somebody,” he told reporters at the Pentagon Tuesday. “I’m quite happy with what I’ve inherited.”

That “inheritance” includes: the service’s main acquisition command, Space Systems Command (SSC); the Space Rapid Capabilities Office (Space RCO) responsible for getting desirable new tech into the hands of operators as fast as possible; and, as of Oct. 1, the Space Development Agency (SDA), which is developing a new National Defense Space Architecture designed to provide resilient capabilities and currently reports to the Defense Departments Research & Engineering undersecretariat.

SSC has been reorganized three times over the past two years. Meanwhile, there has been much confusion and speculation about how SDA would be subsumed Space Force and its relationship to SSC.

“I plan no organizational changes at all across the three organizations,” stressed Calvelli, who took up the job as the first-ever assistant secretary of the Air Force for space acquisition and integration on May 5. He also serves as the top acquisition executive for the Space Force.

His position was created by the 2020 National Defense Authorization Act, in large part due to congressional worries that there are too many agencies with authority for Defense Department space procurement — with the Government Accountability Office in 2016 famously detailing 60 different entities involved in space acquisition, and noting just how convoluted and complex the process was. Since that time, said one source close to the issue, that number actually has grown to 67.

Instead, Calvelli explained that he intends to use the Space Acquisition Council, also created by the 2020 NDAA, to herd all the acquisition cats.

“Congress gave me this neat little tool called the Space Acquisition Council,” he said. “And so my intentions are to kind of use that as the integrating function across all things space for the DoD.”

Indeed, rather than reorganizing to achieve results, Calvelli said the real need is to ensure a laser focus by all on keeping control of program management and execution.

“We need to execute, right? I mean, we lose speed by delivering late,” he said. And speed, he emphasized a number of times, is critically important for space at a time when the military faces growing challenges on orbit from Russia and China.

SDA and NRO: Free To Be Me

In particular, Calvelli said he would not tamper with the special authorities — and exemptions from DoD’s complex acquisition regulations — now wielded by SDA for rapidly iterating development of its planned satellite constellations in Low Earth Orbit via what the agency calls “tranches.”

There has been much speculation about how much freedom — especially regarding budget, but also internal DoD acquisition rules and processes, such as the Joint Capabilities Integration and Development System — the agency’s director, Derek Tournear, would have once the transition to Space Force is complete.

“They come over with their authorities, and the intention is not to change a thing,” Calvelli said. “I love what SDA is working on and what they’re doing, and to me the most important thing SDA can do now is be successful and to execute their planned programs.”

NRO: Let Them Do What They Do Best

Calvelli, who spent much of his career at the National Reconnaissance Office (NRO), said that he hadn’t yet had time to dive deeply into the thorny issue of who is responsible for acquisition of space-based intelligence, surveillance and reconnaissance (ISR), including directly buying remote sensing satellite imagery from commercial providers.

Developing and operating ISR satellites, including for use by battlefield commanders, has long been the purview of NRO, which also took over the job of buying commercial imagery from the National Geospatial-Intelligence Agency in 2017. NGA, however, still is responsible for buying commercial analysis gleaned from imagery, and disseminating the ISR data gathered by NRO with both civilian and military users.

Space Force, however, last year made clear its ambitions for taking over the mission of what it calls “tactical ISR” from space, meaning rapidly providing satellite-derived imagery and ISR products to military commanders for battlefield use — something that is critical to the Pentagon’s Joint All Domain Command and Control (JADC2) plans for running modern warfare closely integrating land, sea, air, space and cyber operations. (Meanwhile, the Army has its own ambitions to be self-sufficient in obtaining satellite imagery for the battlefield, having long felt aggrieved that its needs were not being met.)

The potential for overlaps and gaps if areas of responsibility for tactical ISR are not clearing defined has already exercised Congress, especially on the House side.

“I have not been the thick of it,” Calvelli said.

“I will tell you my opinion, though,” he added. “The NRO knows how to do two things: they know how to build ISR spacecraft big and small, and they know how to buy commercial data. And so, if there truly ends up being a need for more data from the Space Force side of the house, I think we will be silly, in my personal opinion, to reinvent the wheel and build them ourselves as opposed to just go either to commercial or to the NRO.”

Calvelli said that in his mind, the roles already “are very clearly defined.”

Further he said, “there’s not enough money to have any overlap in terms of mission like that. And so I would do everything I possibly can from this role here to make sure that we don’t duplicate the efforts, because I think we’re just wasting money at that point in time.”

Cyber Threat Awareness: How to Prepare for a Cyberattack on the Grid