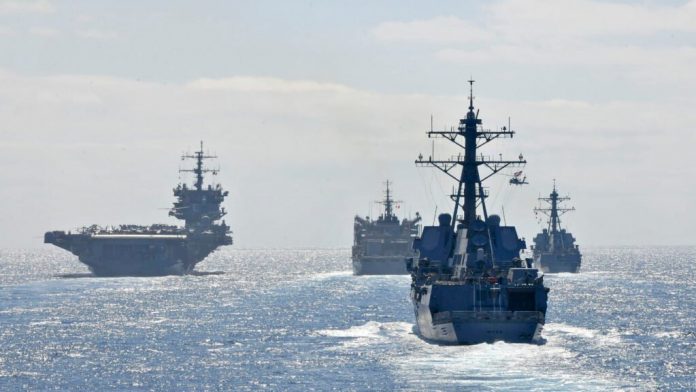 Following several troubling incidents and acquisition missteps, the House Armed Services Committee recently proposed creating a new congressional commission to study the Navy’s current condition. The legislation came days after a similar idea was suggested by AEI’s John Ferrari in a Breaking Defense op-ed. But below, James Foggo, a retired admiral and former commander of US Naval Forces Europe and Africa, argues the Navy’s troubles have not been a secret, and neither is the way forward — no congressional committee necessary.

A recent Breaking Defense op-ed by retired Army Maj. Gen. John Ferrari makes the claim that the US Navy is a “hollow force” like that of the 1980’s US Army and needs direct oversight in the form of a new congressional commission. I respectfully agree to disagree with Maj. Gen. Ferrari. The Navy is not broken, and the acknowledged challenges it faces won’t be helped by yet another layer of bureaucracy. What the Navy needs is more support and more focused missions.

There are many similarities between the mid-Cold War condition (1970-1980) of all the armed forces and their readiness condition in 2022. Each service has seen multiple deployments in support of the wars in Southwest Asia since 2001 that have worn down readiness and reduced opportunities for maintenance and training in ways similar to how Vietnam war deployments affected the services in the 1970s. It is therefore disingenuous to single out the Navy in this regard, especially since the maritime service suffered budget and readiness cuts to support large ground force deployments in Afghanistan and Iraq over the last two decades.

The Navy’s problems are already well known to its leaders and members of Congress. A combination of shrinking force structure, increased deployments, a flatline or decreasing budget, and deferred maintenance, training, repair, and rest have culminated in an overall lower Navy state of readiness. These conditions have put at risk the Navy’s ability to operate globally as a deterrent force and to wage war when required against peer and regional opponents.

While the blame game over how we got here has been going on for some time, the last thing that the Navy needs is another task force to examine the known outcomes of the last 30-plus years. Rather, it is worthwhile to take a few moments to examine the mistakes of the past, in naval resource allocation and ship construction, in order to avoid driving ourselves to another hollow force posture of the 1970s.

The post-Vietnam war period was a difficult one for all the services. Like the Army, the Navy was accused of being a hollow force then due to cuts in the numbers of ships from 743 ships in June 1970 to 530 ships by September 1980. Most of those cuts however were in older, World War II-era ships over 30 years of age.

It was not a decade without challenges. There were numerous accidents, including major ones like the Kennedy-Belknap collision in 1975 that killed eight sailors and injured another 48. The Navy also suffered from substance abuse issues and racial unrest earlier in the decade. But thanks to leaders like Admirals Elmo Zumwalt, James Holloway and Tom Hayward who addressed these challenges head on, rather than avoiding them, the service was well-prepared to enter the Reagan buildup of the 1980’s that would approach 600 ships.

But while the buildup took place, the military was also reorganized under the Goldwater-Nichols Act of 1986, which had the effect, as former Navy Secretary John Lehman predicted, of elevating regional commanders who competed for resources rather than cooperating on America’s global security — and furthering the long tradition of stretching the Navy. Then, after the Cold War, then-Chairman of the Joint Chiefs of Staff Colin Powell reduced all the services by one-third based on personnel, a measurement that made sense for the soldier-centric Army, but not the vessel- and platform-centric Navy. The whole Joint Force concept took on much more of an Army focus as all the conflicts across the post-Cold War era have been land-centric, especially those in the Middle East, with the Navy providing deployed firepower in support.

The under-consideration and overburdening of the Navy was evident after the Fleet Response Plan of 2003 and the Optimized Fleet Response Plan of 2015 both struggled to work to restore a regular schedule of deployment and maintenance. Additional operational demands on the fleet came in support of strikes against ISIS, and surges to deter Iran and North Korea, along with continual reductions in fleet size. Operational concerns always take first place, and training and maintenance get deferred to get the required naval forces on station to support deployed commander requirements.

Direct, operational chain of command from the president to regional commanders is vital, and no service chief should stand in the way of that process. That said, the input of the service chief must be returned to the centralized planning process so the secretary of defense and the president have a full understanding of how the orders issued will impact the fleet now and in the future.

After 9/11, Transformation As A Prelude To Program Higher Costs

Another shift came in 2001 when then-Defense Secretary Donald Rumsfeld sought to “transform” the military services to a force structure several generations in the future through out-of-the-box thinking and support from private industry to overcome the inherent challenges of the bureaucratic defense acquisition and evaluation system.

The Navy, and the other services embraced the idea of transformation because the boss said to do so, even if it came with huge risks. In the Navy’s case the Ford class aircraft carrier, DDG-1000 Zumwalt class destroyer, and the littoral combat ship (LCS) all likely violated the fundamentals of the evolutionary defense acquisition system by trying to put too many new and immature technologies and concepts into just one new class of ship. Generally Navy ships adopt evolutionary and not revolutionary changes.

The Ticonderoga class cruisers, for example, added the AEGIS weapon system but had the same hull and engineering equipment as the previous Spruance class destroyer. The Arleigh Burke class destroyer that came after the Ticonderoga’s had a different hull form than the cruiser but had the same AEGIS weapon system and engineering equipment. It is sometimes better to prioritize payload over platform. In contrast, the Ford, Zumwalt, and LCS all introduced dozens of new systems and concepts from electromagnetic catapults and integrated electrical propulsion to radical new tumblehome and trimaran hulls to small and rotational crews. It was just too much for the acquisition, test and evaluation system to digest on a normal budget and timeline.

Failures in testing caused delays in construction and completion that, in turn, increased costs. Congress was unhappy with the increased costs and imposed penalties on the programs in terms of cost ceilings that caused further delays in construction and testing. It became a vicious cycle that continues as the Navy slowly overcomes each technological challenge in turn.

Like the early 1970’s force, today’s fleet has aging warships that need to be retired in order to modernize the fleet in the wake of another long period supporting ground forces ashore in Asia. The Navy is, however, still trying to make the modernization choices that will lead to the next fleet force structure and that remains a challenge. But unlike the 1970s, today’s Navy is hobbled by flat budgets and will likely see fewer ships and aircraft before numbers increase as older, retiring ships are not replaced.

In the 1970’s the Spruance, and later Perry class ships, as well as Los Angeles class submarines were making their way into the fleet in numbers. Today the Navy’s top priority is delivery of the Columbia-class SSBN to replace the aging Ohio-class SSBN. The Navy was unsuccessful in obtaining cost-sharing, from the whole of government, for the financial burden of construction of this “national deterrent,” which puts a huge burden on the Navy’s ship construction account.

As a result, there are fewer ships entering the fleet, and those come from older, established programs like the DDG-51 class destroyers. Funds are limited to modernize those older and/or less capable ships retained, leading to rapid decommissionings that often anger Congress. While it makes sense to decommission some of the older cruisers, the fate of the Littoral Combat Ship is still a matter for debate.

While the Navy made a mistake in retiring the Oliver Hazard Perry-class frigates without a replacement, it has recovered with a new program of record to build the Constellation-class frigates. Adopting the Italian FREMM-class design for the frigate saved years on the acquisition process and the first ship of the class should be delivered in 2026. Furthermore, while divesting of older platforms, the Navy has invested in prototyping various unmanned platforms and charged the Commander, Fifth Fleet with the responsibility of testing and evaluation of unmanned systems through Task Force 59 as an augmentation force for manned platforms in the Fleet.

If there is to be a congressional commission to examine the needs of the Navy, as current HASC language recommends, then several things should be considered. The US Navy’s fundamental challenge comes back to the number of ships the service possess that can be deployed globally in support of national interest. If the president and Congress (from both parties) value the service’s contribution to supporting allies, deterring adversaries and, if need be, fighting directly, then they need to fund the service to expand to the 355 or more ships that CNO Admiral Mike Gilday has requested. If not, then as former Deputy Defense Secretary Bob Work has suggested, national leaders need to stop using the Navy for these rotational assignments and either assign other service components or abandon them altogether.

I am all in favor of forward presence but caveated by “presence with a purpose.” Given the inherent physical attributes that a warship brings as a self-contained combat system that is not limited by status of forces agreements, national boundaries outside the 12 nautical mile limit, and the need for disaggregation and reassembly overseas, it would seem the clear choice to fund the Navy’s growth so that the service can continue to deploy as desired, but also have time to repair ships, and train and rest its sailors.

James G. Foggo is a retired US Navy admiral, former commander of US Naval Forces Europe and Africa and commander NATO Allied Joint Force Command Naples. He is currently the dean of the Navy League’s Center for Maritime Strategy.