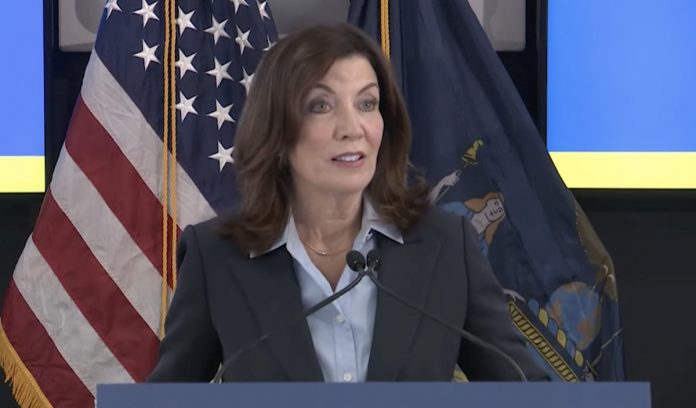 Irate about the recent Supreme Court decision that struck down New York’s “proper cause” requirement, New York Gov. Kathy Hochul announced this week that she would, with the help of the Legislature, create a list of “sensitive locations” where law-abiding permit holders would be prohibited from carrying concealed firearms.

“In the wake of the reckless Supreme Court decision to strike down the ‘proper cause’ provision of New York’s concealed carry law, I am convening an extraordinary session of the legislature tomorrow, where we will enact new policy that carefully regulates access to concealed carry permits within the confines of the decision,” she said on Wednesday.

“My staff has been working with the legislature around-the-clock to get this done right,” she continued. “We will stop at nothing to protect New Yorkers.”

The governor also said that after the legislation passes, the default status will be that firearms are banned in all private businesses unless they affirmatively state that “concealed firearms are welcome here.”

“The presumption in the state of New York, after we sign this bill into law, will be the presumption that private property owners will not want to have concealed carry weapons on their premises,” she explained.

McCloy said, “Do you have numbers to show that it’s the concealed carry permit holders that are committing crimes?

In other words, Hochul’s plan to improve the safety of New Yorkers is to ensure the very people, capably and responsibly armed citizens, who can actually stop a violent criminal or mass killer in the act do not have the means to do so because they are in a “sensitive location,” otherwise known as a gun-free zone.

Creating more gun-free zones will not save lives nor will it make New York a safer place. What it will do, however, is create more victims. Because violent individuals do not follow the law and they seek out soft targets where they know they are less likely to meet armed resistance.

Why Does Joy Behar Belittle Black Americans Who Own Guns to Protect Their Families?